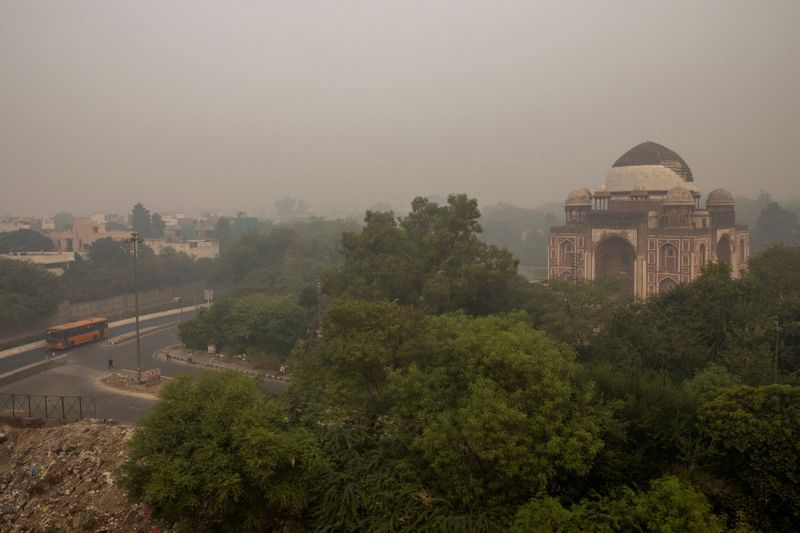 By Neha Arora and Mayank Bhardwaj

NEW DELHI (Reuters) – Favourable weather conditions led to a rare drop in pollution in India’s capital New Delhi, with residents last month breathing the cleanest air in at least four years but the authorities are warning that air quality is set to drop sharply in November.

A delayed end to the monsoon, intermittent rains and a sharp pick-up in wind speeds ensured that the concentration of hazardous, small airborne particles known as PM2.5 in a cubic metre of air averaged 72 in October when air quality typically takes a turn for the worse.

That was sharply down from an average concentration of 126 recorded in October 2020 – 25 times over the World Health Organization’s safe limit – according to data gathered by the state-run Central Pollution Control Board.

But a confluence of factors, including falling temperatures, a drop-off in winter wind speed and farmers preparing to torch farm waste of the previous rice crop to ready the field for planting the wheat crop, is likely to turn the air hazardous.

“Because of frequent rains, most farmers didn’t get to burn crop stubble, and now they have an even shorter window to dispose of crop waste,” said Anumita Roychowdhury, an executive director at the Centre for Science and Environment think tank.

“As rains ebb, more and more farmers will rush to burn rice stubble, and that will happen when broader weather patterns will allow pollutants to hang in the air, resulting in a thick smog,” Roychowdhury said.

Poor air quality over the capital is a reminder of the challenges India faces in reducing pollution as world leaders meet at the United Nations COP26 summit in Scotland to agree on strategies to fight global warming.

Adding to the concerns, the Diwali festival of lights falls on Thursday when Indians will set off firecrackers as part of an ancient Hindu tradition.

Delhi has banned the sale of firecrackers, but authorities rarely get to enforce such curbs.

Crop waste burning accounts for about a quarter of air pollution in October and November.

Since 2018, India has been giving individual farmers a 50% subsidy and farm cooperatives 80% subsidy to buy machines that dispose of rice paddy stubble left out in the field by mechanised harvesters.

Despite government subsidies, the machines that collect crop stubble and turn them into mulch are too expensive to buy. Farmers also complain that they need to pay upfront and then claim subsidies later – a process that takes about 10 months.

“The Punjab and Haryana governments are responsible for implementing the subsidy programme, and their implementation may be flawed to some extent, but every year more and more farmers are using this equipment to get rid of crop stubble,” the government official said, referring to India’s two bread basket states.

In October this year, crop waste burning came down by 52% against the same month last year, government data showed.

In Pakistan’s Lahore city, not far from the border with India, the air quality index rose to 341, the worst in the world on Monday, according to IQ Air. On Tuesday, air quality in Pakistan’s second-most populous city was 162.

In the winter months, industrial and vehicular emissions, smoke from brick kilns and crop fires lead to a sharp spike in air pollution in Lahore, just like in India.