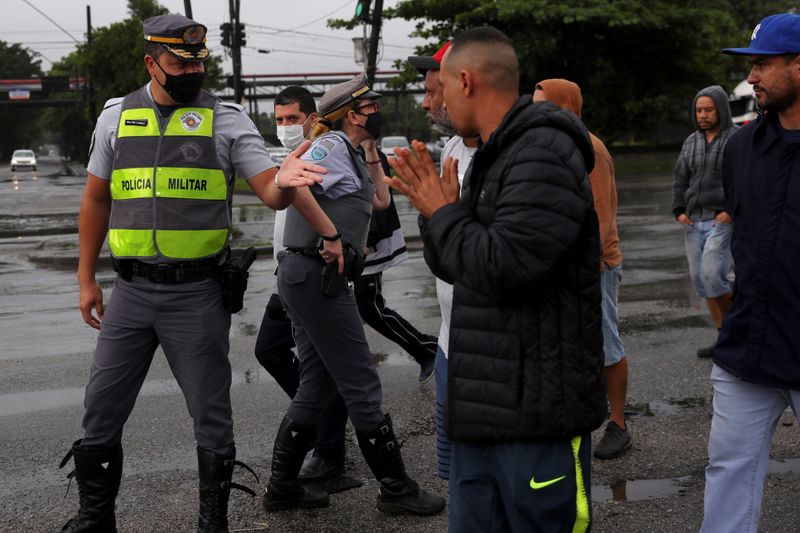 © Reuters. Truckers talk to police officers as they want to protest and promote a strike against the rising fuel prices in Santos, Sao Paulo state, Brazil November 1, 2021. REUTERS/Amanda Perobelli

By Leonardo Benassato and Ana Mano

SANTOS, Brazil (Reuters) -Brazilian truckers protesting high fuel prices have not disrupted any of the country’s logistics with no federal roads or ports blocked, the Infrastructure Ministry said on Monday.

Citing data from the federal highway police updated around noon, the ministry’s latest statement on the ongoing protests said there was only one place where truckers were still demonstrating – the BR-116 highway in the town of Barra Mansa.

There are no blockades and truckers not participating in the protests were able to continue their journeys, the statement said.

Soaring diesel prices have contributed to double-digit inflation in Brazil, hurting an economic recovery from the world’s second-deadliest coronavirus outbreak and raising the prospect of a major trucker strike like one that paralyzed roads in 2018.

Dealing with high fuel prices is a top priority for far-right President Jair Bolsonaro, as he tries to restore some of his popularity ahead of general elections next year. He has long backed Brazil’s truckers who form a key part of his support base.

Brazilian ports and fuel distribution hubs have not been affected by the demonstrations, according to the Infrastructure Ministry.

At Santos port, however, truck drivers staged a demonstration in the early hours of the day; police then intervened and expelled protesters but there were no arrests.

“Autonomous truckers are asking for what is their right,” said Romero Costa, a director of union Sindicam, referring to pay, retirement benefits and high fuel costs. “We were not blocking any roads.”

Santos port authorities did not have an immediate comment.

According to a statement from ship agency Cargonave, a Brazilian court order prohibited truckers from blocking port access and main roads. As such, cargo was arriving normally at Santos, Latin America’s largest port.

Monday’s protests were unlikely to gain force mainly because they lacked support from all trucker unions, Cargonave said in a statement, adding that all Brazil’s large ports were operating normally.