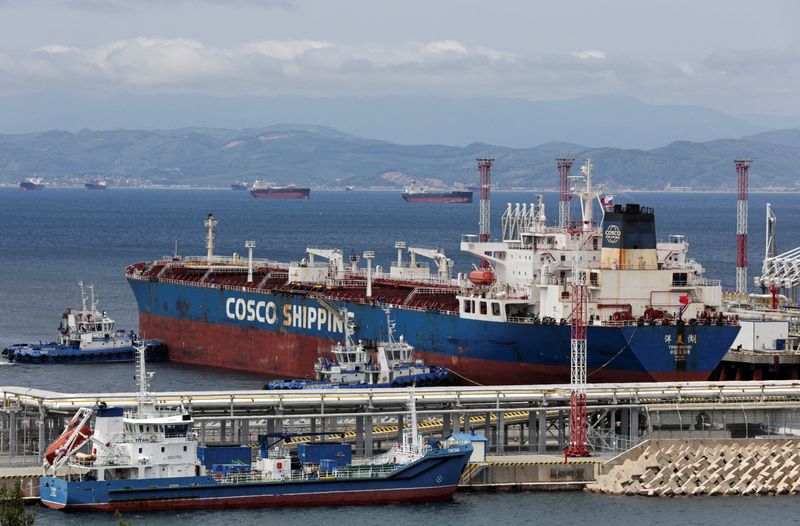 By Andreas Rinke and Angelo Amante

SCHLOSS ELMAU, Germany (Reuters) – The Group of Seven economic powers have agreed to explore imposing a ban on transporting Russian oil that has been sold above a certain price, they said on Tuesday.

“We invite all like-minded countries to consider joining us in our actions,” the G7 leaders said in the communique.

The war in Ukraine and its dramatic economic fallout, in particular soaring food and energy inflation, has dominated this year’s summit of the group of rich democracies at a castle resort in the Bavarian Alps.

The G7 is looking at price caps as a way to prevent Moscow profiting from its invasion of Ukraine, which has sharply raised energy prices, taking the sting out of Western efforts to reduce imports of Russian oil and gas.

Russian oil export revenues climbed in May even as volumes fell, the International Energy Agency said in its June monthly report.

A ceiling on how much other countries pay Russia for oil would squeeze Russian President Vladimir Putin’s “resources that he has to wage war and secondly increase stability and the security of supply in global oil markets,” a senior U.S. administration official said on Tuesday.

G7 leaders have also agreed to push for a ban on imports of Russian gold as part of efforts to tighten the sanctions squeeze on Moscow, an EU official said on Tuesday.

The war, which has killed thousands and sent millions fleeing, entered its fifth month with no signs of abating.

Firefighters and soldiers searched on Tuesday for survivors in the rubble of a shopping mall in central Ukraine struck by a Russian missile.

G7 nations want to crank up pressure on Russia without stoking already soaring inflation that is causing strains at home and savaging developing nations.

There is a “real risk” of multiple famines this year as the Ukraine war has compounded the negative impact of climate crises and the COVID-19 pandemic on food security, United Nations chief Antonio Guterres said last week.

G7 leaders pledged $4.5 billion on Tuesday to fight global hunger, according to the communique.

The United States will provide over half of that sum, which would go to efforts to fight hunger in 47 countries and fund regional organisations, a senior U.S. official said.

The G7 is attempting to rally emerging countries, many with close ties to Russia, to oppose Putin’s invasion of Ukraine, and invited five major middle-and-low income democracies to the summit to win them over.

Some are more concerned with the impact of soaring food prices at home, blaming Western sanctions, not Russia’s invasion of one of the world’s top grain producers and blockade of its ports, for the shortages.

Asked if G7 leaders had found a way to let Ukraine export its grain, British Prime Minister Boris Johnson said on Tuesday: “We’re working on it, we’re all working on it”.

G7 leaders also committed on Tuesday to creating an international “Climate Club” to forge cooperation on climate change and made pledges on decarbonising industrial sectors.