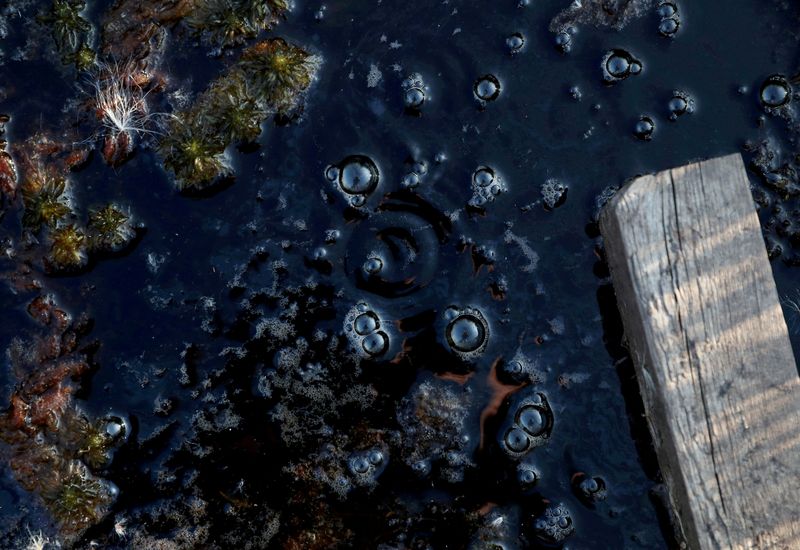 © Reuters. FILE PHOTO: Methane bubbles are seen in an area of marshland at a research post at Stordalen Mire near Abisko, Sweden, August 1, 2019.REUTERS/Hannah McKay/File Photo

GLASGOW (Reuters) – Nearly 90 countries have joined a U.S.- and EU-led effort to slash emissions of the potent greenhouse gas methane 30% by 2030 from 2020 levels, a pact aimed at tackling one of the main causes of climate change, a senior Biden administration official said.

The partnership will be formally launched later on Tuesday.

Methane is the main greenhouse gas after carbon dioxide. It has a higher heat-trapping potential than CO2 but breaks down in the atmosphere faster – meaning that cutting methane emissions can have a rapid impact on reining in global warming.

The Global Methane Pledge, which was first announced in September, now includes half of the top 30 methane emitters accounting for two-thirds of the global economy, according to the Biden administration official.

Among the new signatories that will be announced on Tuesday is Brazil – one of the world’s five biggest emitters of methane.

China, Russia and India, also top-five methane emitters, have not signed on to the pledge. Those countries were all included on a list identified as targets to join the pledge, previously reported by Reuters.

Since it was first announced in September with a handful of signatories, the United States and European Union have worked to get the world’s biggest methane emitters to join the partnership.

There were roughly 60 countries signed up only last week, after a final diplomatic push from the United States and EU ahead of the COP26 summit https://www.reuters.com/business/cop.

While it is not part of the formal U.N. negotiations, the methane pledge could rank among the most significant outcomes from the COP26 conference, given its potential impact in holding off disastrous climate change.

A U.N. report in May said steep cuts in methane emissions this decade could avoid nearly 0.3 degree Celsius of global warming by the 2040s. Failing to tackle methane, however, would push out of reach the Paris Agreement’s aim to limit global temperature rise to 1.5 C above preindustrial levels and avoid the worst impacts of climate change.

The 30% methane cut would be jointly achieved by the signatories, and cover all sectors. Key sources of methane emissions include leaky oil and gas infrastructure, old coal mines, agriculture and landfill sites.

If fulfilled, the pledge is likely to have the biggest impact on the energy sector, since analysts say fixing leaky oil and gas infrastructure is the fastest and cheapest way to curb methane emissions.

The United States is the world’s biggest oil and gas producer, while the EU is the biggest importer of gas.

The United States is due to release oil and gas methane regulations this week. The EU and Canada both plan to unveil methane legislation addressing the energy sector later this year.

Problems with the restoration of full operation of the Nord Stream pipeline continue to put pressure on gas futures prices in Europe, and this factor remains the key reason for the increase in gas prices.

Why do gas prices keep going up?

Why do gas prices keep going up? Last week, gas prices in the EU started going up again. It was caused by Gazprom’s statement that anti-Russian sanctions hamper resolution of the situation with transportation and repair of Siemens engines for the Nord Stream pipeline.

The analysts also singled out additional price growth factors. Intensification of upward gas price dynamics might have been provoked by a stoppage of annual preventive maintenance of some capacities of Norwegian gas field Troll and gas treatment unit Kollsnes from August 13 to the end of the month. This led to a fall in production capacity of 20 million cubic meters of gas during this period.

It is worth noting the atypically high temperatures in Europe, which lead, on the one hand, to a rise in demand for electricity, for air conditioning, and, on the other hand, to a reduction in hydropower generation amid droughts in some regions, notably in France.

Moreover, according to the association WindEurope, wind generation in the European Union remains below the norm, which is usually 11-20% in summer. On August 15, the share of wind power generation was 9.5% of the total. This factor could also increase demand for gas.

We previously reported that Oil prices fell again at the start of Monday’s trading.

Natural gas prices on the London Stock Exchange ICE record rose to more than $2,600 per thousand cubic meters for the first time since early March, according to the site.

At the time of publication, the September futures on the Dutch TTF hub were worth 250.395 euros per kilowatt-hour, or $2,693.17 per thousand cubic meters.

The sharp rise in the cost of gas in Europe on the exchanges is because there is a full shortage of this: gas, supplies from Russia have been reduced, LNG is expensive on the international market and it can not fully replace the supply of Russian gas, expensive petroleum products and coal.

The increase over the last 24 hours was 13.75 percent. The rise in gas prices is due to the abnormal drought in Europe and the interruption of Russian fuel supplies. The latter are now running at 20 percent of standard capacity.

We previously reported that Saudi Aramco sees no strong impact on its position in Asia.

Oil is getting cheaper. Oil quotes are falling Tuesday night due to concerns about slowing global economic growth and weakening demand for fuel.

It became known the day before that growth in retail sales and industrial production in China in July was weaker than analysts’ forecasts.

Retail sales rose by 2.7% year-on-year instead of the expected 5% growth. China’s industrial production growth slowed to 3.8% last month from 3.9% in June, while analysts’ consensus forecast was 4.6%.

Is oil getting cheaper? Why It’s Getting Cheaper

To support China’s economy, the People’s Bank of China injected 400 billion yuan (nearly $60 billion) into the financial system as part of its medium-term lending (MLF) program and also cut the rate on one-year MLF loans by 10 basis points, to 2.75% per year.

“This unexpected decision gave the impression that the central bank was concerned about the scale of the weakening economy,” wrote Commerzbank (ETR:CBKG) analyst Carsten Fritsch. — In our view, problems in the real estate sector, combined with a zero-tolerance coronavirus strategy, are likely to continue to weigh on the economy in the short to medium term, meaning it will be a persistent negative factor for oil prices.”

We previously reported that oil prices have stepped up their fall.