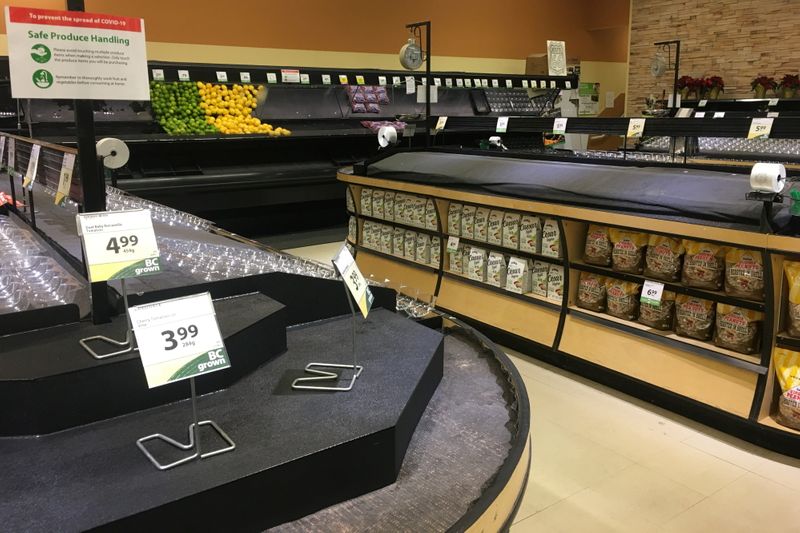 By Nia Williams and Rod Nickel

(Reuters) – Shoppers in Canada’s flood-hit province of British Columbia have emptied grocery shelves following catastrophic flooding, although the shortages are as much down to panic buying as disrupted supply chains, industry associations said on Thursday.

Even as flood waters start to recede, some parts of the province are expected to face to temporary shortages of dairy supplies, with retailers and officials calling for calm.

Canada’s westernmost province declared a state of emergency on Wednesday after a phenomenon known as an “atmospheric river” brought a month’s worth of rain in two days. The rainfall washed out roads and railways, cutting off Vancouver and the lower mainland region from the rest of the country, and blocking access to some towns entirely.

Pictures on social media showed empty shelves and refrigerators in grocery stores, reminiscent of the early days of the COVID-19 pandemic, as shoppers scrambled to stock up. Photos of one store’s produce section showed nothing left but lemons, limes and cranberries.

“We understand that this is a very stressful and challenging time for many of our communities,” the company said on Twitter (NYSE:). “Please – buy only what your family needs at this time.”

Some three-quarters of B.C.’s milk production was stranded for several days, amounting to a few million litres that farmers had to dump, said Holger Schwichtenberg, chair of the BC Dairy Association.

Collections are now resuming, but the region will see a temporary milk shortage before it can access supplies from other regions or provinces, he added.

Some of the worst-affected areas are in the Fraser Valley east of Vancouver, where 63 dairy farms were ordered to evacuate. The city of Abbotsford in the Fraser Valley supplies half of the dairy, eggs and poultry consumed in British Columbia, with many farms situated on the fertile soils of the low-lying Sumas Prairie, a former lake that was drained a century ago to make way for agriculture.

The mayor of Abbotsford estimated damage to his city alone could be up to C$1 billion ($793 million).

While some towns like Hope, 120 kilometres (75 miles) east of Vancouver, are facing food shortages because they were cut off by highway washouts and mudslides, others are seeing shelves picked clean by panic buying.

“In parts of the province, particularly the interior, there has been significant and not well-understood consumer panic,” said Greg Wilson, director of B.C. government relations for the Retail Council of Canada.

“There are highways open between B.C. and Alberta and there is capacity in Alberta to supply the interior of B.C.”

Wilson said Vancouver and the lower mainland can access more food supplies from Washington state to the south, and the rerouting of supply chains was already underway.

U.S. discussing joint reserves release with China, others in aim at OPEC