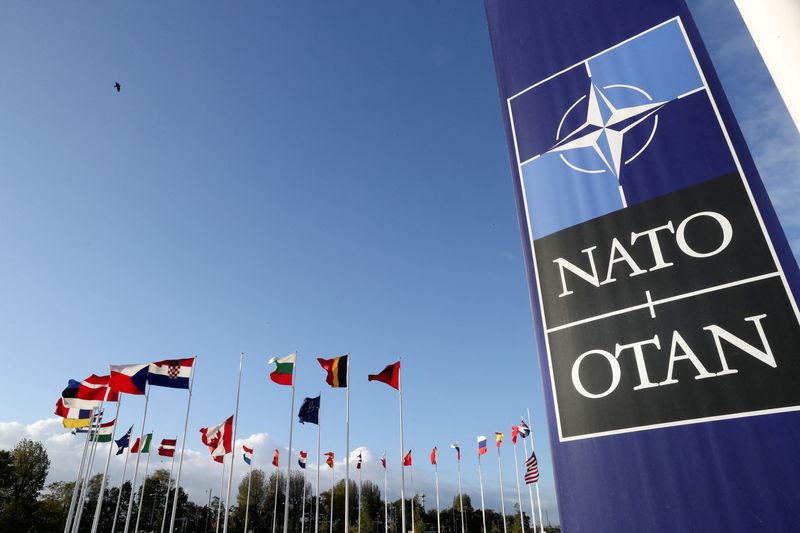 By Anne Kauranen and Jonathan Landay

HELSINKI/KHARKIV, Ukraine (Reuters) – Finland said on Thursday it would apply to join NATO “without delay”, with Sweden expected to follow, as Russia’s invasion of Ukraine looked set to bring about the very expansion of the Western military alliance that Vladimir Putin aimed to prevent.

The decision by the two Nordic countries to abandon the neutrality they maintained throughout the Cold War would be one of the biggest shifts in European security in decades. Moscow called Finland’s announcement a direct threat to Russia, and threatened retaliation, including unspecified “military-technical” measures.

It came even as Russia’s war in Ukraine was suffering another big setback, with Ukrainian forces driving Russian troops out of the region around the second largest city Kharkiv, the fastest Ukrainian advance since forcing Russia to withdraw from the capital and northeast more than a month ago.

NATO Secretary-General Jens Stoltenberg said the Finns would be “warmly welcomed” and promised a “smooth and swift” accession process.

Finland and Sweden are the two biggest EU countries yet to join NATO. Finland’s 1,300-km (800-mile) border will more than double the length of the frontier between the U.S.-led alliance and Russia, putting NATO guards a few hours’ drive from the northern outskirts of St Petersburg.

“Finland must apply for NATO membership without delay,” President Sauli Niinisto and Prime Minister Sanna Marin said in a joint statement, hoping steps to take the decision would “be taken rapidly within the next few days”.

“This cannot fail to arouse our regret, and is a reason for corresponding symmetrical responses on our side,” Peskov added.

Russia’s foreign ministry said Moscow would be forced to take “retaliatory steps, both of a military-technical and other nature”, giving no further details. Russian officials have spoken in the past about potential measures including stationing nuclear-armed missiles on the Baltic Sea.

‘LOOK AT THE MIRROR’

Asked on Wednesday if Finland would provoke Russia by joining NATO, Niinisto said: “My response would be that you caused this. Look at the mirror.”

Five diplomats and officials told Reuters that NATO allies expect both countries to be granted membership quickly, paving the way for an increased troop presence in the Nordic region to defend them during a one-year ratification period.

Putin, Russia’s president, cited NATO’s potential expansion as one of the main reasons he launched a “special military operation” in Ukraine in February.

NATO describes itself as a defensive alliance, built around a treaty declaring that an attack on one member is an attack on all, granting U.S. allies the protection of Washington’s superpower might including its nuclear arsenal.

Moscow regards that as a threat to its security. But Putin’s decision to invade Ukraine has changed Nordic public opinion, with political parties that had long backed neutrality now embracing the view that Russia is a menace.

Finland in particular has centuries of uneasy history in Russia’s shadow. Ruled by the Russian empire from 1809-1917, it fought off Soviet invasions on the eve of World War Two, and accepted some Soviet influence as the price of avoiding taking sides in the Cold War. Since it and Sweden joined the EU in 1995, they have aligned more firmly with the West.

Moscow said it would halt gas flows to Germany through the main pipeline over Poland, while Kyiv said it would not reopen a pipeline route it shut this week unless it regains control of areas from pro-Russian fighters. Prices for gas in Europe surged.

In Geneva, the U.N. Human Rights Council decided on Thursday to launch an investigation into possible war crimes by Russian troops during their occupation of the area near Kyiv, before they were driven out at the end of March.

U.N. High Commissioner for Human Rights Michelle Bachelet said there were many examples of possible war crimes, including unlawful killings and summary executions.

Moscow denies deliberately attacking civilians. Its ambassador to the United Nations in Geneva said the West was “organising another political rout to demonize Russia”.

On the front lines, Ukraine has mounted a counter-offensive in recent days, ousting Russian forces from villages north and east of Kharkiv they had held since the start of the invasion.

Reuters journalists have confirmed that Ukraine is now in control of territory stretching to the banks of the Siverskiy Donets River, around 40 km (25 miles) east of Kharkiv. To the north, the Ukrainians have been pushing towards the Russian border. In the latest advance, they announced on Wednesday the recapture of the village of Pytomnyk, halfway to the frontier.

“The withdrawal of Russian forces from the Kharkiv Oblast (region) is a tacit recognition of Russia’s inability to capture key Ukrainian cities where they expected limited resistance from the population,” Britain’s defence ministry said.

Russia’s retreat has begun to make it possible for some residents to return to recaptured villages around Kharkiv. But areas remain unsafe – littered with mines and booby traps.

The invasion has displaced more than 8 million people within Ukraine and the number of refugees to flee the country now exceeds 6 million, U.N. data showed. 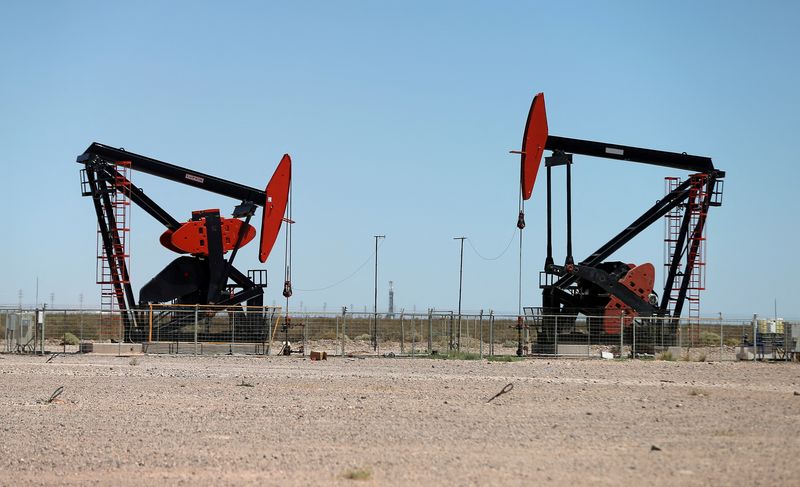 NEW YORK (Reuters) – After hitting seven-week highs, oil prices slumped 2% on Tuesday as Reuters reported that the United States could ease some restrictions on Venezuela’s government, raising hopes that the market could see some additional supplies. 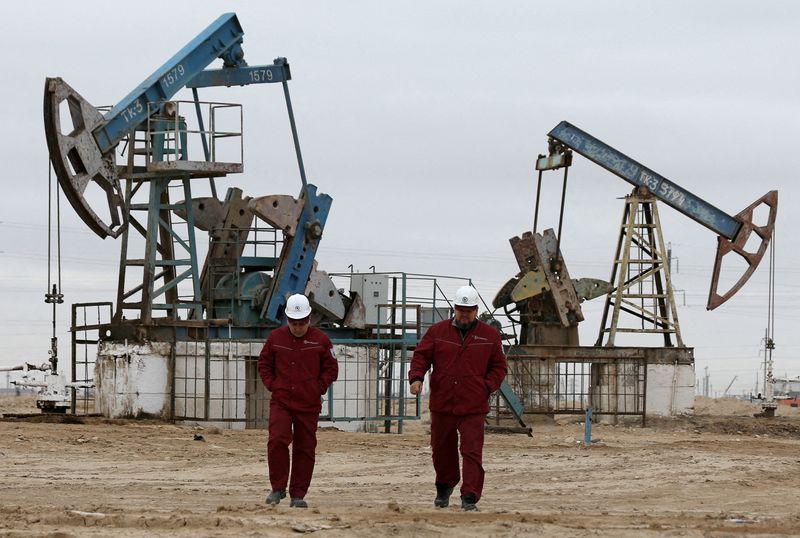 © Reuters. FILE PHOTO: Workers walk as oil pumps are seen in the background in the Uzen oil and gas field in the Mangistau Region of Kazakhstan November 13, 2021. REUTERS/Pavel Mikheyev

Both benchmark prices fell about 2.5% on Wednesday.

“A slump in Wall Street soured sentiment in early trade as it underlined concerns over weakening consumption and fuel demand,” said Satoru Yoshida, a commodity analyst with Rakuten Securities. [MKTS/GLOB]

“Still, oil markets are keeping a bullish trend as a pending import ban by the European Union on Russian crude is expected to further tighten global supply,” Yoshida said.

The European Union this month proposed a new package of sanctions against Russia for its invasion of Ukraine. This would include a total ban on oil imports in six months’ time, but the measures have not yet been adopted, with Hungary being among the most vocal critics of the plan.

The European Commission unveiled on Wednesday a 210 billion euro ($220 billion) plan for Europe to end its reliance on Russian fossil fuels by 2027, and to use the pivot away from Moscow to quicken its transition to green energy. 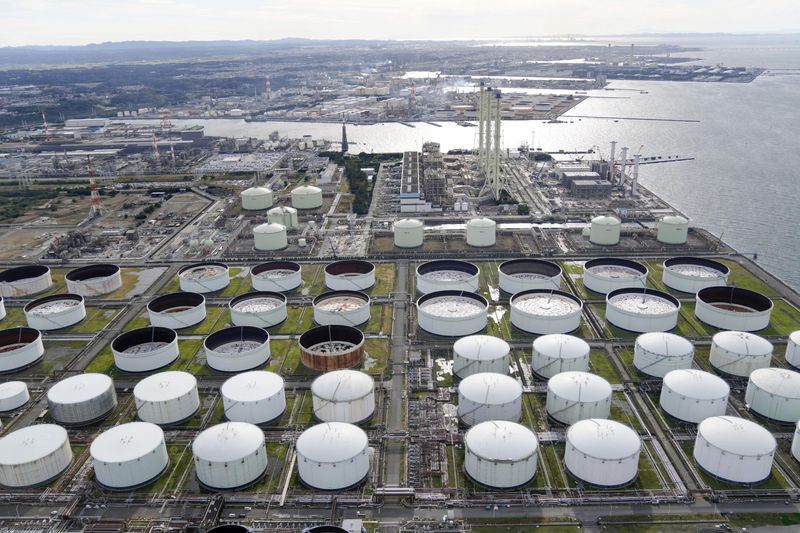 Brent remained at an unusual discount to WTI a day after settling below the U.S. benchmark for the first time since May 2020. Traders and analysts cited strong export demand and tightening U.S. crude stockpiles.

“While on the face of it, the report was extraordinarily bullish, they (refiners) are racing to put more refined product on the market… there’s obviously a refiners response,” said John Kilduff, a partner at Again Capital LLC.

The dollar strengthened and global stocks retreated on concerns about economic growth and rising inflation.

“The perception that we could see some more supply coming Venezuela coming into the market, along with the equity markets, it’s causing some profit taking in a much-needed technical correction in the crude,” said Dennis Kissler, senior vice president for trading at BOK Financial.

The European Union’s failure to persuade Hungary to lift its veto on a proposed embargo on Russian oil was adding price pressure, although some diplomats expect agreement on a phased ban at a summit at the end of May.

On the demand side, hopes of further lockdown easing in China boosted expectations of a recovery. Authorities allowed 864 of Shanghai’s financial institutions to resume work, sources said, and China has relaxed some COVID test rules for U.S. and other travelers.