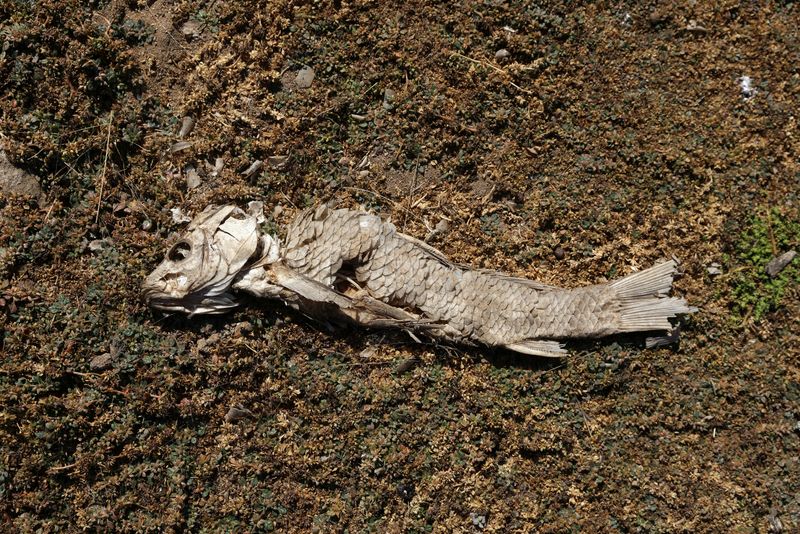 By Alexander Villegas and Rodrigo Gutierrez

PENUELAS, Chile (Reuters) – The Penuelas reservoir in central Chile was until twenty years ago the main source of water for the city of Valparaiso, holding enough water for 38,000 Olympic-size swimming pools. Water for only two pools now remains.

A huge expanse of dried and cracked earth that was once the lake bed is littered with fish skeletons and desperate animals searching for water.

Amid an historic 13-year drought, rainfall levels have slumped in this South American nation that hugs the continent’s Pacific coast. Higher air temperatures have meant snow in the Andes, once a key store of meltwater for spring and summer, is not compacting, melts faster, or turns straight to vapor.

The drought has hit mine output in the world’s largest copper producer, stoked tensions over water use for lithium and farming, and led capital Santiago to make unprecedented plans for potential water rationing.

“We have to beg God to send us water,” said Amanda Carrasco, a 54-year-old who lives near the Penuelas reservoir and recalls line fishing in the waters for local pejerrey fish. “I’ve never seen it like this. There’s been less water before, but not like now.”

The reservoir needs rainfall – once reliable in winter but now at historic lows, said Jose Luis Murillo, general manager of ESVAL, the company that supplies Valparaiso with water.

“Basically what we have is just a puddle,” he said, adding that the city now relied on rivers. “This is especially significant if you think that several decades ago the Penuelas reservoir was the only source of water for all greater Valparaiso.”

Behind the issue, academic studies have found, is a global shift in climate patterns sharpening natural weather cycles.

Normally, low-pressure storms from the Pacific unload precipitation over Chile in winter, recharging aquifers and packing the Andes mountains with snow.

But naturally occurring warming of the sea off Chile’s coast, which blocks storms from arriving, has been intensified by rising global sea temperature, according to a global study https://academiccommons.columbia.edu/doi/10.7916/D8V12DD7 on sea temperature and rainfall deficits. Ozone depletion and greenhouse gasses in the Antarctic, meanwhile, exacerbate weather patterns that draw storms away from Chile, according to a study https://journals.ametsoc.org/view/journals/clim/19/12/jcli3774.1.xml on variables affecting Antarctic weather.

Analysis of tree rings going back 400 years shows how rare the current drought is, said Duncan Christie, a researcher at the Center for Climate and Resilience in Chile. It is totally unrivalled for duration or intensity.

He said that meant the Andes – which he called the country’s “water towers” – were not getting a chance to replenish, which in turn meant that as snow melted in spring there was far less water to fill rivers, reservoirs and aquifers.

Miguel Lagos, a civil engineer and water specialist, traveled to measure snow cover near the Laguna Negra station in central Chile some 50 kilometers (31 miles) east of Santiago – part of a process to estimate summer water supply.

“There was just nothing,” he told Reuters. “There were so few precipitation events and such warm conditions that the snow melted that same winter.”

As snow compacts, creating new layers, this helps keep it colder for longer. But with warmer weather and less snowfall, Lagos said, top layers of snow were melting faster or turning straight to vapor, a process called sublimation.

A 2019 study http://dgf.uchile.cl/rene/PUBS/MD_dynamics.pdf in the International Journal of Climatology that analyzed Chile’s drought from 2010 to 2018 said shifting weather events could ease the drought in future, but much would depend on the trajectory of human emissions impacting climate.

Segundo Aballay, an animal breeder in the Chilean village of Montenegro, is praying change comes soon.

“If it doesn’t rain this year we will be left with nothing to do,” he said. “The animals are getting weaker and dying day by day.”

Unfortunately for agriculture workers like Aballay, researchers at the University of Chile predict the country will have 30% less water over the next 30 years, based on mathematical models and historic data.

“What we call a drought today will become normal,” Lagos said.

In the Laguna de Aculeo, another dried up lake south of Santiago, local campsite manager Francisco Martinez recalled hundreds of people coming to the area to take out kayaks or swim in the waters.

Now rusting piers and old boats sit in the barren landscape. An eerie island in the middle of what was once water rises up above the dust.

“Now there is no water, it is a desert here,” Martinez told Reuters. “The animals are dying and there is nothing to do here in the lagoon any more.”