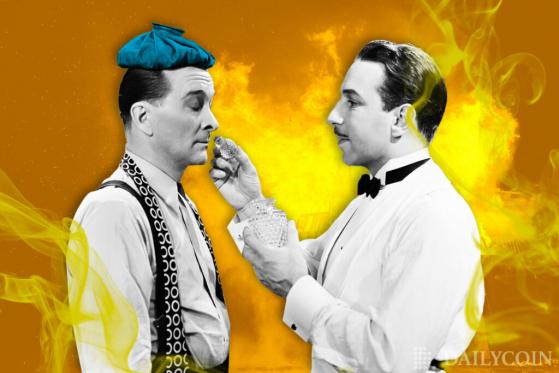 More than $100 Billion Wiped Off Global Crypto Market Cap as Bitcoin Falls Under $25,000


Bitcoin, the world’s largest cryptocurrency, which has been unable to break off the bearish pressure fueled by macroeconomic issues, experienced its third-largest single-day drop in a decade this weekend, as its price fell to under $25k.

The crypto market crash has been gathering momentum, coming to a head on Sunday after U.S. data showed an 8.6% rise in inflation in May from the year prior, marking the fastest increase since December 1981.

Since the release, the price of Bitcoin has fallen sharply over the last 24 hours, dropping by 11.3%, and by as much as 22% over the last seven days. Bitcoin fell to as low as $24,400 over the weekend⁠—its lowest price since November 2020.

More than $100 Billion Wiped off the Global Crypto Market Cap

Bitcoin is not the only crypto tumbling today, with each of the top 10 Altcoins ranked by market cap reporting losses of at least double digits for the last 24 hours.

The resulting market crash has wiped off more than $100 billion from the global crypto market cap, which has fallen to below $1 trillion for the first time since February 2021.

The cumulative crypto market cap now stands at $985 billion, with Bitcoin dominating 47.2% of the market.

The sell-off catalyzing the sharp decline of the crypto market is being fueled by inflation concerns, which are only predicted to worsen.

Find out where the price of Bitcoin is headed next in:

Is Bitcoin Bottoming Out?

To learn about the predicted adoption rate of Bitcoin, try:

Nexo offers to buy out Celsius’ loans amid withdrawal suspension

The annual ETH inflation after Merge has once again turned positive for the first time since early November.

According to ultrasound.money, the annual ETH inflation rate rose 0.08% to 622,000 ETH as of December 6. At the same time, the annual ETH burn rate is 527,000 ETH. This news will also have a negative impact on the current price of Ethereum.

Meanwhile, back in early November, the volume of ETH being burned was overtaking issuance, making the cryptocurrency deflationary.

The cryptocurrency exchange site Uniswap V3 had the most commissions burned (~4192.1 ETH burned in the last thirty days). In second place were commissions burned for ETH transactions on the Ethereum network (3195 ETH). The three most active projects were closed by the USDT Stablecoin smart contract, through which ~2593 ETH was burned.

Almost in a month the Ethereum network burned over 50 000 ETH, and every minute about 1.2 ETH are burned in commissions.

Recall that before Ethereum switched to Proof-of-Stake algorithm, the amount of ETH issued per day was calculated by the formula: reward per block for miners and pay for PoS-stackers – ETH burned. However, after the transition to PoS, rewards for mined blocks are no longer generated at the execution level or on the main Ethereum network.

Given that the issue at the execution level after the transition to PoS is zero, the number of new ETH is now calculated as follows: the reward for PoS-stackers is burned tokens. At the time of writing, the ETH rate in the ETH/USD trading pair is $1,261, according to Nomics. The market capitalization at the same time is fixed at $154.5 billion.

The British Treasury is finalizing a package of rules to restrict the crypto business. It was reported by the Financial Times, referring to the Financial Conduct Authority (FCA) of Great Britain.

The list of new rules includes restrictions on foreign cryptocurrency businesses in the UK; provisions on how businesses should act in case of bankruptcy, as well as requirements for advertising cryptocurrencies. This news will also have a negative impact on the current price of Ethereum and the cryptocurrency market.

Sources close to the British Ministry of Finance said in a media commentary that the ministry also intends to expand the FCA’s crypto restrictions and supervision over the cryptocurrency market. Details, however, remain unclear. Officially, the timetable for considering a new set of rules for the crypto market remains unknown. but media reports indicate that the British authorities may start consultations as early as early 2023.

In early November 2022, the Committee on Digital, Culture, Media and Sport (DCMS) in the U.K. The House of Commons announced the launch of a study into non-interchangeable tokens (NFT) and blockchain technology.

DCMS committee chair Julian Knight MP said that NFTs burst into the digital world so quickly that there was no time to stop and think. Now that the market is changing dramatically and there are fears that the bubble may burst, it is necessary to understand the risks, the benefits of this disruptive technology, and to formulate regulatory requirements for it, he stressed.

Amid the collapse of the FTX crypto exchange, UK authorities are discussing many initiatives to regulate the crypto market. Rishi Sunak, who took over as prime minister after the short reign of Liz Truss, played no small role here. Sunak is considered a key supporter of cryptocurrency in the government circles of the country.

Previously, we reported that Tether claims its USDT loans are “over-secured.”.

For the first time, a Chinese court recognized that NFT is virtual ownership

Collections of NFTs have been recognized as virtual property under current Chinese law. The court in Hangzhou ruled.

The ruling states that NFTs have property rights characteristics such as value, rarity, manageability, and saleability. The court described virtuality and the technology that provides it as unique attributes of the assets. Whether this will have a positive effect on the current price of Bitcoin, we will see soon enough.

The case was heard in the sale of NFT virtual property by the defendant company. The plaintiff gave the firm personal information and transferred 999 yuan (about $144) before the purchase. However, the company did not deliver the goods, and returned his money a few days later, citing incorrect identification information. As a result, his claim was assessed at 99,999 yuan (about $14,380). The court sided with the seller, confirming the misrepresentation.

“As a virtual work of art, the NFT virtual property digital collection itself combines the original expression of the creator of the art and has the value of the corresponding intellectual property rights. At the same time – they are unique digital assets formed on the blockchain based on the mechanism of trust and consensus between the nodes. Therefore, NFT collections fall under the category of virtual property,” the ruling said.

On that basis, the court ruled that the rules governing online trading apply to asset transactions.

However, despite the restrictions, as of the end of May, there were 83 billion yuan (about $12.33 billion) worth of digital yuan transactions in the country. China continues to actively pursue the adoption of digital currency.