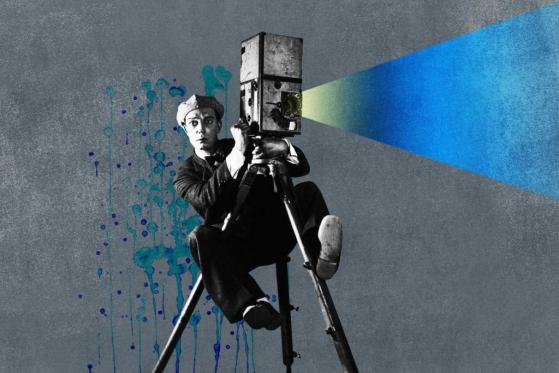 
The application of blockchain in the entertainment industry knows no bounds with its footprint spanning across sectors including music streaming services, social media, and gaming applications. However, one major area that is yet to tap into the cutting-edge innovation, is the movie industry.

All this is about to change as Vuele, a decentralized protocol, plans to extend blockchain’s influence into the movie industry. Vuele, according to their official website, is the premier platform for watching and collecting exclusive, limited edition, feature-length films, alongside other NFT collectibles.

Vuele is the product of a partnership between CurrencyWorks, a financial technology blockchain pioneer, as well as a NFT and digital payment provider, and Enderby Entertainment, a global film, television, and digital media company.

Being a proprietary project, Vuele wants to set the standard that others will follow for years to come, while leading the change itself in the movie industry.

At the top of its priorities is helping the film industry to relate its offerings to consumers by delivering feature films and collectible content. In other words, Vuele wants to give its users what conventional video streaming platforms have taken away from them. To understand this better, you may need to read further.

In an exclusive interview with DailyCoin, Cameron Shell (LON:), Executive Chairman of Currency Work, and co-head at Vuele, shared his insights on the problems they intend to solve within the movie industry and the NFT space at large.

Starting with the core aspect, the movie industry, Shell noted that the major problem they are seeking to address is the ability, or in many cases, the inability, of the consumer to deeply connect to the movies or content they love.

To further clarify his thoughts, Shell made reference to several decades ago, when DVDs were the main medium for storing media, at that time people would have a collection of blu ray disks of their favorite movies. In other scenarios, people simply kept memorabilia, such as stickers, cards, or figures of specific moments and characters in a movie, just in an attempt to stay connected to such moments.

While this was achievable back in those days, Shell claims that a lot has changed in the movie industry, and now that we are well and truly in the era of streaming services, people don’t get to enjoy some of those aforementioned privileges and comforts anymore.

“In the streaming revolution, we don’t have that opportunity to own [media]. Instead, people subscribe for those pieces of content at the cost of about 10, or 12, or 18 dollars, or euros, or whatever it is per month, during which we have access to these movies, which is great in its own sense. But we see a bit of an evolution of that, where we’re able to actually take a [version of our] own, an actual specialized copy of that movie,”
Shell noted.

Unlike with Vuele, existing streaming services do not offer specialized copies of movies nor collectible content, which is where their proprietary solution comes into play, bringing full feature length movie content back, this time in NFT form.

In this context, a specialized copy of a film is a version that includes special interviews on the set of production, or behind the scenes (BTS), as well as other noteworthy moments from the movie’s production. These copies are usually one-of-a-kind and are different from the copy that is eventually released publicly.

Those who acquire these specialized copies would get early access prior to the release of the theatrical version.

Once the aforementioned has been achieved, the second step is where the protocol takes a person’s movie interests, along with the movie in question (i.e the specialized movie copy), and integrates them into a metaverse where they can be easily accessed anytime, and anywhere.

So overall, in order to help consumers connect closer to their movie interests, in addition to the other content they love, Vuele is working to integrate such content into a native metaverse as collectibles.

A close comparison to Vuele, according to Shell, is ‘NBA Top Shots or autograph,’ on which people can collect special moments from the game as NFTs, similarly to collecting basketball cards which give fans special access to basketball players, or the league itself. The concept is the same in application, but for the movie industry.

Vuele to also Function as a Decentralized ‘Netflix’

Although the core purpose is to connect consumers with specialized copies of movies and other NFT content, Vuele will also serve as a decentralized movie streaming service, just like Netflix (NASDAQ:), Amazon (NASDAQ:) Prime, and their likes.

Notably, once the acquisition of the specialized movie copies is complete, the theatrical version will be released much later, and is then made available for other Vuele users to stream on the platform. “It is at this point that the experience is similar to Netflix,” Shell said, adding that the process of signing up and navigating the platform is smooth, seamless, and consumer friendly.

By setting up an account on Vuele, Shell claims that a user is automatically setting up a wallet, however, without the 16 bit encryption code used by most decentralized exchanges or wallets. This wallet will enable users to participate in NFT acquisition.

Ultimately, Vuele wants to revolutionize the way movie content is consumed, collected, and memorabilized, all by leveraging blockchain technology.

Prior to the advent of the Vuele protocol, there has never been a platform solely dedicated to movie NFTs. This seems to imply that early investors and end-users could potentially tap into a wealth of opportunity given that the project has room to become the next big thing in the movie business.

The annual ETH inflation after Merge has once again turned positive for the first time since early November.

According to ultrasound.money, the annual ETH inflation rate rose 0.08% to 622,000 ETH as of December 6. At the same time, the annual ETH burn rate is 527,000 ETH. This news will also have a negative impact on the current price of Ethereum.

Meanwhile, back in early November, the volume of ETH being burned was overtaking issuance, making the cryptocurrency deflationary.

The cryptocurrency exchange site Uniswap V3 had the most commissions burned (~4192.1 ETH burned in the last thirty days). In second place were commissions burned for ETH transactions on the Ethereum network (3195 ETH). The three most active projects were closed by the USDT Stablecoin smart contract, through which ~2593 ETH was burned.

Almost in a month the Ethereum network burned over 50 000 ETH, and every minute about 1.2 ETH are burned in commissions.

Recall that before Ethereum switched to Proof-of-Stake algorithm, the amount of ETH issued per day was calculated by the formula: reward per block for miners and pay for PoS-stackers – ETH burned. However, after the transition to PoS, rewards for mined blocks are no longer generated at the execution level or on the main Ethereum network.

Given that the issue at the execution level after the transition to PoS is zero, the number of new ETH is now calculated as follows: the reward for PoS-stackers is burned tokens. At the time of writing, the ETH rate in the ETH/USD trading pair is $1,261, according to Nomics. The market capitalization at the same time is fixed at $154.5 billion.

The British Treasury is finalizing a package of rules to restrict the crypto business. It was reported by the Financial Times, referring to the Financial Conduct Authority (FCA) of Great Britain.

The list of new rules includes restrictions on foreign cryptocurrency businesses in the UK; provisions on how businesses should act in case of bankruptcy, as well as requirements for advertising cryptocurrencies. This news will also have a negative impact on the current price of Ethereum and the cryptocurrency market.

Sources close to the British Ministry of Finance said in a media commentary that the ministry also intends to expand the FCA’s crypto restrictions and supervision over the cryptocurrency market. Details, however, remain unclear. Officially, the timetable for considering a new set of rules for the crypto market remains unknown. but media reports indicate that the British authorities may start consultations as early as early 2023.

In early November 2022, the Committee on Digital, Culture, Media and Sport (DCMS) in the U.K. The House of Commons announced the launch of a study into non-interchangeable tokens (NFT) and blockchain technology.

DCMS committee chair Julian Knight MP said that NFTs burst into the digital world so quickly that there was no time to stop and think. Now that the market is changing dramatically and there are fears that the bubble may burst, it is necessary to understand the risks, the benefits of this disruptive technology, and to formulate regulatory requirements for it, he stressed.

Amid the collapse of the FTX crypto exchange, UK authorities are discussing many initiatives to regulate the crypto market. Rishi Sunak, who took over as prime minister after the short reign of Liz Truss, played no small role here. Sunak is considered a key supporter of cryptocurrency in the government circles of the country.

Previously, we reported that Tether claims its USDT loans are “over-secured.”.

For the first time, a Chinese court recognized that NFT is virtual ownership

Collections of NFTs have been recognized as virtual property under current Chinese law. The court in Hangzhou ruled.

The ruling states that NFTs have property rights characteristics such as value, rarity, manageability, and saleability. The court described virtuality and the technology that provides it as unique attributes of the assets. Whether this will have a positive effect on the current price of Bitcoin, we will see soon enough.

The case was heard in the sale of NFT virtual property by the defendant company. The plaintiff gave the firm personal information and transferred 999 yuan (about $144) before the purchase. However, the company did not deliver the goods, and returned his money a few days later, citing incorrect identification information. As a result, his claim was assessed at 99,999 yuan (about $14,380). The court sided with the seller, confirming the misrepresentation.

“As a virtual work of art, the NFT virtual property digital collection itself combines the original expression of the creator of the art and has the value of the corresponding intellectual property rights. At the same time – they are unique digital assets formed on the blockchain based on the mechanism of trust and consensus between the nodes. Therefore, NFT collections fall under the category of virtual property,” the ruling said.

On that basis, the court ruled that the rules governing online trading apply to asset transactions.

However, despite the restrictions, as of the end of May, there were 83 billion yuan (about $12.33 billion) worth of digital yuan transactions in the country. China continues to actively pursue the adoption of digital currency.