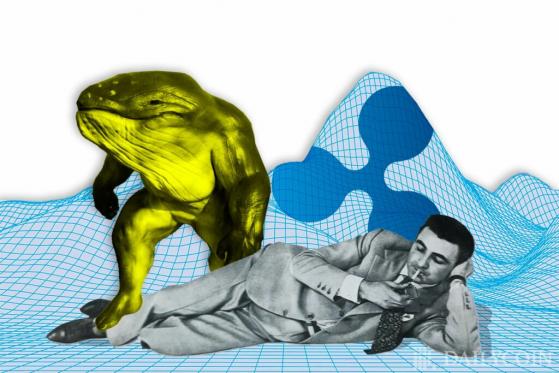 Whales After Ripple: Millions of XRP Moved During the Weekend


Over the past few days, directly following the lawsuit hearing held between Ripple and the SEC last week, hundreds of millions of XRP coins have been moved through crypto exchanges to anonymous wallets.

As reported by popular cryptocurrency tracker WhaleAlert, which reports on large crypto transactions, more than 330 million XRP has been shifted across several crypto exchanges and anonymous wallets.

The largest transaction involved the transfer of more than 70 million XRP coins, worth over $26.7 million USD at the time. The enormous amount was sent to an anonymous wallet, which holds over $62M worth of assets, owned by Ripple itself.

The 70 million XRP transfer, worth more than $26.7 million at the time, was transferred from Ripple to an RL18-VN wallet, which has been known to be Ripple’s escrow wallet for a few years already.

The wallet currently holds over $62 million worth of assets, and is said to be used for moving XRP out of the company. Companies use their escrow wallets to cover operating expenses or to transfer assets to crypto exchanges.

WhaleAlert further noted other major XRP transfers being made from multiple crypto exchanges to anonymous wallets. Each transfer accounted for millions of XRP coins, which were shifted from a range of trading platforms, including Bitfinex, Bittrex, Crypto.com and Nexo. In total, a cumulative 335 million XRP which is over 0.6% of the total circulating supply of the XRP, was moved during the wave of recent transfers.

Exchange outflows, or withdrawals from trading platforms, are considered a key metric that signifies trends in the cryptocurrency market, as investors typically pull coins from exchanges for long-term holdings. Traditionally, an increase in exchange outflows signifies bullish sentiment towards the specific asset.

Meanwhile, the WhaleStats tracker noted that the amount of XRP wrapped on the Binance Smart Chain blockchain has increased significantly over the past days. According to the website, Ripple’s native coin was among the top 10 most purchased digital assets by the 2000 biggest BNB whales.

As of today, XRP still sits among the 15 most held assets in the top 100 BNB whale wallets, each of which holds more than 466K XRP coins on average, according to WhaleStats.

Despite this, the price of the XRP has been on a severe downtrend in recent days, nosediving by more than 25% since Friday, losing 16% of its value in the past 24 hours alone. The 8th biggest crypto by market cap is trading at $0.30, a 17-month low at the time of writing.

A Class Action Lawsuit Was Filed Against Binance Over Terra

In this together: Musk and Saylor down a combined $1.5B on Bitcoin buys