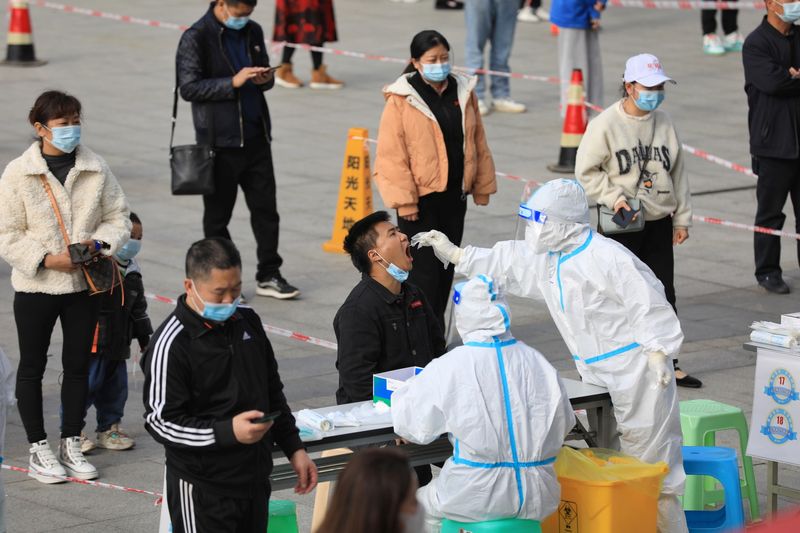 © Reuters. A medical worker in protective suit collects a swab from a man during a mass nucleic acid testing in Huichuan district following new cases of the coronavirus disease (COVID-19) in Zunyi, Guizhou province, China October 23, 2021. cnsphoto via REUTERS

BEIJING (Reuters) – China will not give up on its zero-tolerance policy towards local COVID-19 cases any time soon, some experts said, as the policy has allowed it to quickly quell local outbreaks, while the virus continues to spread outside its borders.

To stop local cases from turning into wider outbreaks, China has developed and continually refined its COVID-fighting arsenal — including mass testing, targeted lockdowns and travel restrictions – even when those anti-COVID measures occasionally disrupted local economies.

“How long it will last depends on the virus-control situation worldwide.”

In a major outbreak in July-August, China counted a total of over 1,200 local symptomatic infections. In the latest flare-up, mostly in northern China, some 538 local cases were reported between Oct. 17 and Nov. 1.

Despite the lower caseload, the geographical spread of the infections has put constraints on China’s leisure and tourism sectors.

Since Oct. 23, travel agencies have not been allowed to organise tourism between certain provinces, with such restrictions affecting trips to nearly one-third of the mainland’s 31 province-level regions including Beijing.

Many cities with infections have also closed indoor entertainment and cultural venues. A flurry of marathons, theatrical performances and concerts have been delayed or cancelled.

China also requires weeks of quarantine for most travellers arriving from abroad.

In contrast, some Asia-Pacific countries are starting to open selectively to fully vaccinated international travellers as they seek to secure a more normal footing for their economies and societies.

The successful containment of clusters and popular support for restricting international travel make it overwhelmingly likely that China will stick to its zero tolerance towards domestic cases for at least another year, Gavekal Dragonomics analyst Ernan Cui said in a note.

“Officials seem to believe that giving up on the zero-tolerance approach would just replace one set of problems with another,” wrote Cui.

Respiratory disease expert Zhong told state media CGTN that the current 2% death rate of the disease globally, despite vaccination, is not tolerable in China.

Some countries had loosened curbs while still reporting some small clusters, leading to a new series of infections that have since forced them to backpedal again, Zhong said.

Such back-and-forth in policy costs more, and has a greater impact on the public, he warned.

The cost of treating COVID patients – on average 20,000 yuan each and sometimes over 1 million yuan for those critically ill – totalled 2.8 billion yuan ($438 million) as of end-June, all paid by the government, state television said in August.