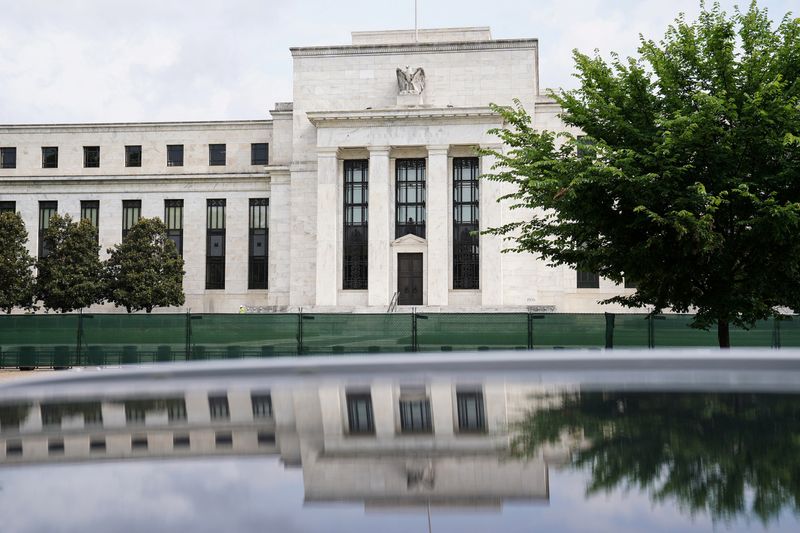 
NEW YORK (Reuters) – The Federal Reserve on Wednesday raised its target interest rate by three-quarters of a percentage point on Wednesday to stem a disruptive surge in inflation, and projected a slowing economy and rising unemployment in the months to come.

The action raised the short-term federal funds rate to a range of 1.50% to 1.75%, and Fed officials at the median projected the rate increasing to 3.4% by the end of this year and to 3.8% in 2023 – a substantial shift from projections in March that saw the rate rising to 1.9% this year.

“Today’s decision comes on the back of a hot U.S. inflation report for May, which prompted increased speculation on Monday that the Fed would abandon its previous signaling of back-to-back 50-bpS hikes in favor of a more aggressive move. Whether or not the Fed chose to prime markets by leaking information to the Wall Street Journal or not is largely irrelevant at this point because the market went all-in on the prospect of a larger rate hike.”

“By standing by its original forward guidance, the Fed would have had to effectively loosen financial conditions when hiking by 50-bps at a time when inflation pressures were mounting. With the announcement largely baked into money market pricing, for both the latest decision and the adjustment in the dot plot, the reaction in financial markets was limited. The emphasis now completely shifts to Chair Powell’s commentary in the press conference as markets try to gauge the Fed’s sensitivity to incoming inflation prints following their latest U-turn and what the FOMC’s appetite is for aggressively taking rates above neutral this year.”

“I wouldn’t be surprised if they go with 75 basis points again July, and then they kind of sit back and wait.”

CHRISTOPHER C. GRISANTI, CHIEF EQUITY STRATEGIST, MAI CAPITAL MANAGEMENT, CLEVELAND, OHIO     “This is going to be a buy on the rumor, sell on the news kind of day. The market was strong today, but now that the results have come out and it’s up 75 basis points, which had become the consensus, people are looking forward, seeing more difficult markets ahead and they’re selling off this morning’s rally.”

“We think the Fed funds rate will approach 3.5% by year end, so another 200 basis points of hikes from here. Still not the end of the world, it’s far below the average Fed funds rate of the last 40 years. But what I’d also point out is while it doesn’t necessarily have to end in recession, it’s harder and harder to think that even the 350 basis points will stop the inflation that we’re seeing now.”

“The Fed is willing to let the unemployment rate rise and risk a recession as collateral damage to get inflation back down. This isn’t a Volker-moment for Powell given the magnitude of the hike, but he is like a Mini-Me version of Volcker with this move.”

France’s Le Maire: “We are in the middle of an inflation peak”