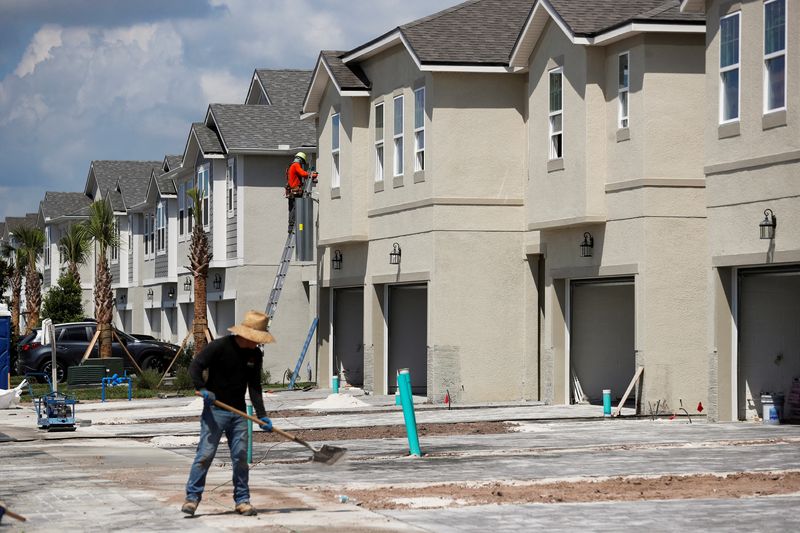 © Reuters. FILE PHOTO: A carpenter works on building new townhomes that are still under construction while building material supplies are in high demand in Tampa, Florida, U.S., May 5, 2021. REUTERS/Octavio Jones


WASHINGTON (Reuters) – Sales of new U.S. single-family homes surged to a seven-month high in November, boosted an acute shortage of previously owned homes on the market, but soaring house prices are an obstacle for first-time buyers.

New home sales increased 12.4% to a seasonally adjusted annual rate of 744,000 units last month, the highest level since April, the Commerce Department said on Thursday. October’s sales pace was revised down to 662,000 units from the previously reported 745,000 units.

Sales rose in the densely populated South as well as in the West and Northeast, but fell in the Midwest.

Economists polled by Reuters had forecast new home sales, which account for more than 10% of U.S. home sales, rising to a rate of 770,000 units.

The National Association of Realtors said on Wednesday that the inventory of previously owned homes fell to an eight-month low in November.

Houses under construction made up 62.9% of the inventory, with homes yet to be built accounting for about 27.4%.

There is a record backlog of houses authorized for construction but not yet started, according to government data published last week. Builders are struggling with worker shortages, expensive materials and delays getting supplies.

At November’s sales pace it would take 6.5 months to clear the supply of houses on the market, down from 7.1 months in October.

Analysis-Omicron begins to leave mark on U.S. economy, but unlikely to derail it 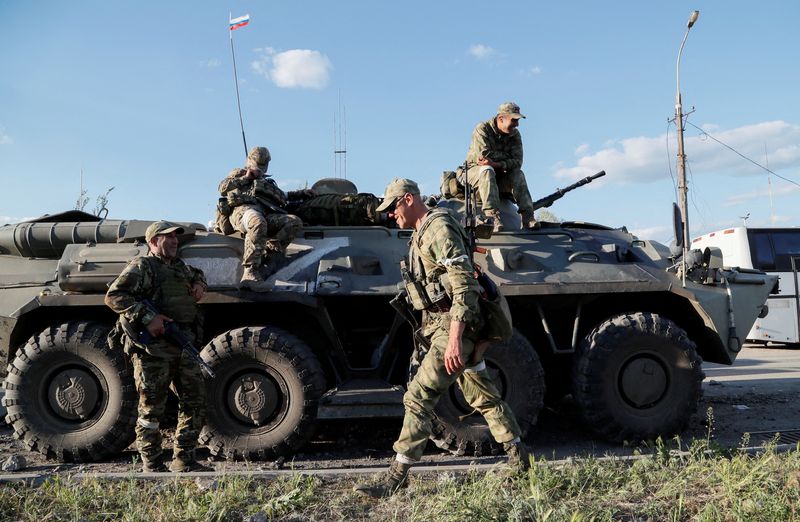 © Reuters. FILE PHOTO: Service members of pro-Russian troops wait before the expected evacuation of wounded Ukrainian soldiers from the besieged Azovstal steel mill in the course of Ukraine-Russia conflict in Mariupol, Ukraine May 16, 2022. REUTERS/Alexander Ermoche


KONIGSWINTER, Germany (Reuters) – G7 financial leaders are likely to focus on Thursday and Friday on how to help Ukraine pay its bills, with reconstruction after the war, surging global inflation, climate change, supply chains and the impending food crisis also high on the agenda.

Finance ministers and central bank governors of the United States, Japan, Canada, Britain, Germany, France and Italy – the G7 – will hold talks as Ukraine, invaded by Russia on Feb. 24, is struggling to fend off the attack.

The Ukraine war is a game-changer for Western powers because it forces them to rethink decades-old relations with Russia not only in terms of security, but also in energy, food and global supply alliances from microchips to rare earths.

“Ukraine is overshadowing these meetings. But there are other issues that must be discussed,” a G7 official, who asked not to be named, said, adding that debt, international taxation, climate change and global health were all up for debate.

Ukraine estimates its financial needs at $5 billion a month to keep public employees’ salaries paid and the administration working despite the daily destruction wrought by Russia.

Russia calls its actions in Ukraine a “special operation” that it says is not designed to occupy territory but to destroy its southern neighbour’s military capabilities and capture what it regards as dangerous nationalists.

The short-term financing package to be agreed by the G7 would cover three months of Ukraine’s needs.

The European Commission offered on Wednesday to provide up to 9 billion euros ($9.44 billion) in loans to Ukraine, financed from EU borrowing guaranteed by EU governments, to cover Kyiv’s needs until the end of June.

The Commission also proposed to set up a fund of unspecified size of grants and loans for Ukraine, possibly jointly borrowed by the EU, to pay for the reconstruction of the country after the war ends.

Some economists estimate the financial need for such a project to be between 500 billion euros and 2 trillion euros ($524 billion to $2.09 trillion), with estimates frequently changing depending on the length of the conflict and the scope of destruction.

With sums of that magnitude coming into play, the EU is considering not only a new joint borrowing project, modelled on the pandemic recovery fund, but also the confiscation of the now frozen Russian assets in the EU, as sources of financing.

Some countries like Germany, however, say that the idea, though politically interesting, would be on shaky legal grounds.

U.S. officials emphasise it is too soon to map out financing for a massive rebuilding plan for Ukraine. Washington wants the discussions to focus on meeting Kyiv’s immediate budget needs over the next three months.

“After all, these rebuilding needs are mostly a bit in the future,” a U.S. Treasury official said. “This is why we’re focused more on the budget needs of Ukraine in the next three months than about reconstruction, Marshall Plans and asset confiscation.” 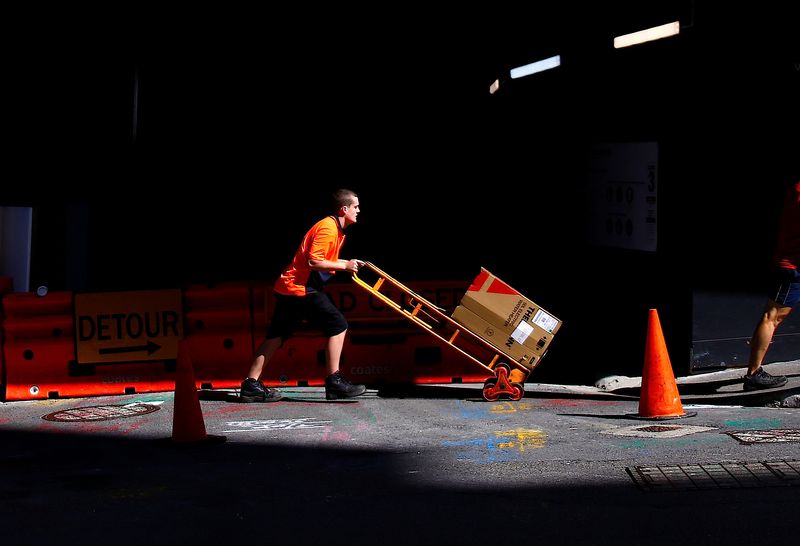 © Reuters. FILE PHOTO – A worker pushes a trolley loaded with goods past a construction site in the central business district (CBD) of Sydney in Australia, March 15, 2018. REUTERS/David Gray

SYDNEY (Reuters) -Australia’s unemployment rate stood at its lowest in almost 50 years in April as firms took on more full-time workers, a tightening in the labour market that will ratchet up pressure for further hikes in interest rates.

Figures from the Australian Bureau of Statistics on Thursday showed the jobless rate held at 3.9% in April, from a downwardly revised 3.9% in March, matching market forecasts.

Employment missed forecast with a rise of just 4,000, though that reflected a large 92,400 gain in full-time jobs being offset by a 88,400 drop in part-time work.

The fall in unemployment will be welcomed by Prime Minister Scott Morrison who has made jobs the clarion cry of his election campaign ahead of what is expected to be a close vote on Saturday.

It also strongly suggests the Reserve Bank of Australia (RBA) will lift interest rates again in June as it scrambles to contain a flare up of inflation to two-decade highs.

So strong is the inflation tide globally that investors are wagering rates will rise to at least 2.5% by the end of the year, even if that threatens to cripple the economy.

So far, the labour market has withstood the pressure with employment rising by 381,500 in the past 12 months. Underemployment also fell to its lowest since 2008 and this rate has a close correlation to wages over time.

Wages, though, are still lagging, at least by the official measure which showed annual growth ticked up only slightly in the first quarter to 2.4%, half the pace of inflation.

However, surveys of businesses paint a different picture with more and more firms saying they are having to bump up pay to attract workers.

The RBA’s Board was particularly alarmed that firms were planning to pass on rising input and labour costs to customers, a sea change from the past decade when fierce competition kept prices restrained.

“The RBA has returned to a more forward-looking approach for labour costs amid much higher inflation, shifting on leading indications from liaison and the anticipated feed through of the still-tightening labour market to wages outcomes,” said Taylor Nugent, an economist at NAB.

He sees the central bank hiking by a quarter point at each of the next three monthly meetings.

© Reuters. FILE PHOTO – A worker pushes a trolley loaded with goods past a construction site in the central business district (CBD) of Sydney in Australia, March 15, 2018. REUTERS/David Gray


SYDNEY (Reuters) – Australia’s unemployment rate stood at its lowest in almost 50 years in April as firms took on more full-time workers, a tightening in the labour market that will ratchet up pressure for further hikes in interest rates.

Figures from the Australian Bureau of Statistics on Thursday showed the jobless rate held at 3.9% in April, from a downwardly revised 3.9% in March, matching market forecasts.

Employment missed forecast with a rise of just 4,000, though that reflected a large 92,400 gain in full-time jobs being offset by a 88,400 drop in part-time work.

The fall in unemployment will be welcomed by Prime Minister Scott Morrison who has made jobs the clarion cry of his election campaign ahead of what is expected to be a close vote on Saturday.