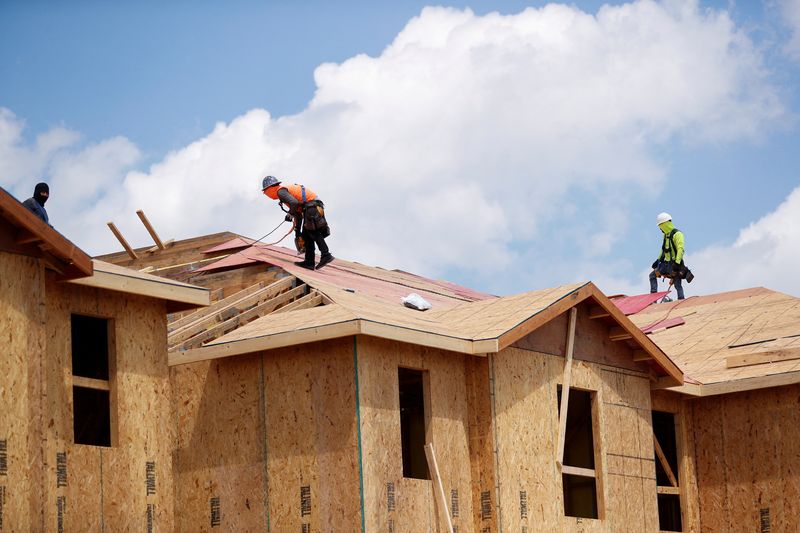 © Reuters. FILE PHOTO: Carpenters work on building new townhomes that are still under construction while building material supplies are in high demand in Tampa, Florida, U.S., May 5, 2021. REUTERS/Octavio Jones/File Photo

WASHINGTON (Reuters) – Sales of new U.S. single-family homes unexpectedly rose in May, but the rebound is likely to be temporary as home prices continue to increase and the average contract rate on a 30-year fixed-rate mortgage approaches 6%, reducing affordability.

New home sales jumped 10.7% to a seasonally adjusted annual rate of 696,000 units last month. April’s sales pace was revised higher to 629,000 units from the previously reported 591,000 units. Sales surged in the West and the densely populated South, but declined in the Midwest and Northeast.

The average contract rate on a 30-year fixed-rate mortgage increased this week to more than a 13-1/2-year high of 5.81%, from 5.78% last week, according to data from mortgage finance agency Freddie Mac (OTC:FMCC). The rate has risen more than 250 basis points since January, amid a surge in inflation expectations and the Federal Reserve’s aggressive interest rate hikes.

There was, however, some encouraging news on the inflation front. While a survey from the University of Michigan on Friday confirmed consumer confidence plunged to a record low in June, consumers’ inflation expectations moderated a bit.

The University of Michigan said its final consumer sentiment index fell to 50.0 from a preliminary reading of 50.2 earlier this month. It was down from 55.2 in May.

The survey’s one-year inflation expectation was unchanged from May at 5.3%, but ticked down from a preliminary June reading of 5.4%. The five-year inflation outlook edged up to 3.1% from 3.0% in May, but was down from 3.3% earlier in June.

The increase in the preliminary inflation expectations and jump in annual consumer prices were behind the Fed’s decision last week to raise its policy rate by three-quarters of a percentage point, its biggest hike since 1994.

“Fed officials will breathe a sigh of relief,” said Christopher Rupkey, chief economist at FWDBONDS in New York. “There is nothing in today’s data to change market expectations for another 75-basis-points rate hike in July.”

Stocks on Wall Street were trading higher. The dollar fell against a basket of currencies. U.S. Treasury yields rose.

Data this week showed sales of previously owned homes fell to a two-year low in May. Housing starts and building permits also declined last month, though they remained at high levels. But cooling demand could help to bring housing supply and demand back into alignment and slow price growth.

Houses under construction made up roughly 65.8% of the inventory, with homes yet to be built accounting for about 25.9%. At May’s sales pace it would take 7.7 months to clear the supply of houses on the market, down from 8.3 months in April.

Taliban call for release of frozen funds after deadly earthquake