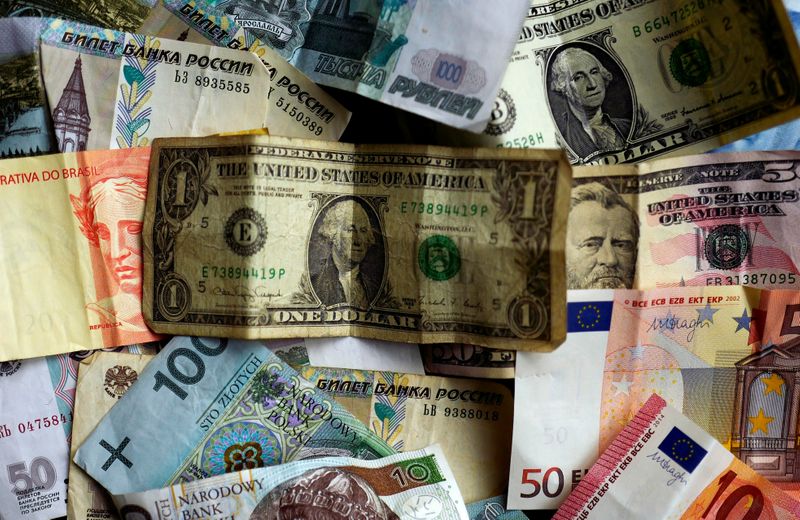 
By Francesco Canepa and Balazs Koranyi

FRANKFURT (Reuters) – Investors are pricing in the briskest inflation rates in decades for the United States and the euro zone but central bankers may be well advised to take that with a pinch of salt given flaws in the indicator.

The so-called five-year/five-year forward gauge of market inflation expectations – or 5y5y for short – has hit 2% in the euro zone and its U.S. counterpart is even above that threshold, which is the Federal Reserve’s and the European Central Bank’s goal.

So should both central banks just declare victory and begin raising rates?

Both indicators, which roughly measure how much compensation investors demand to take on inflation risk over a 10 year period, are marred by flaws.

For starters they have a poor track record of predicting inflation while they have an uncanny correlation with movements in oil prices.

This beats economic logic since one measure is the price of a barrel of crude to be delivered in short order while the other is a long-term rate of change in overall prices.

The correlation may have to do with the internal working of financial markets, where some investors use inflation-linked products to hedge other trades.

“Would the 5y-5y be a good predictor of future realised inflation? I don’t think so because it correlates to oil futures, which are bad predictors,” said Ilia Bouchouev, a managing partner at Pentathlon Investments and a lecturer at New York University.

His firm belongs to a niche of hedge funds that seek to exploit that correlation by simultaneously trading oil futures and inflation swaps when their price diverge.

In addition, the low trading volumes in the swap contracts underpinning the European 5y5y mean a relatively small number of traders can influence its price, which can also be distorted by general market turbulence.

The ECB has long been aware of these and other limitations.

It warned as early as 2006 that the inflation swaps “should not be interpreted as direct market expectations of future inflation rates” and concluded last summer that “market imperfections” accounted for 30 basis points in a 100 basis points fall in the 5y5y since 2008.

The U.S. 5y5y was no better. Unlike its euro zone peer, it is based on the so-called breakeven rate – the spread between the yield on inflation-linked Treasury bonds and their nominal counterparts.

With the Federal Reserve owning almost a quarter of the Treasury Inflation-Protected Security (TIPS) market and over a fifth of the underlying Treasuries, some investors feel that the 5y5y was losing importance as an indicator.

“Pricing on breakevens to some extent is somewhat controlled which to me implies it’s an imperfect mechanism to either get a gauge of what true market inflation expectations are or indeed to perfectly hedge against inflation,” Sonal Desai, chief investment officer of the Franklin Templeton Fixed Income Group, said in a corporate podcast.

ROD FOR OWN BACK

Central bankers have made a rod for their own back.

In 2014, then ECB President Mario Draghi unleashed the market’s obsession with the euro zone’s 5y5y by elevating it as the central bank’s favourite measure of inflation expectations in a speech paving the ground for a massive bond-buying plan.

This may have contributed to the 5y5y own demise based on Goodhart’s law.

This law, named after British economist and former Bank of England policymaker Charles Goodhart and later reformulated by anthropologist Marilyn Strathern, stipulates that when a measure becomes a target, it ceases to be a good measure.

The ECB’s chief economist Philip Lane and fellow board member Isabel Schnabel have already started complementing the 5y5y with the probability, implied in option prices, of inflation coming in within certain ranges.

Old-fashioned forecasts by flesh-and-bone economists were also getting mentions by policymakers.

The Fed, for its part, has even created an Index of Common Inflation Expectations that merges surveys and market prices.

Indeed surveys may be insulated from market turbulence but they also have their drawbacks, such as a limited sample size and relative infrequency.

“In the end all indicators have limitations so we go with the preponderance of evidence,” Fritzi Koehler-Geib, chief economist at German state bank KfW, said.