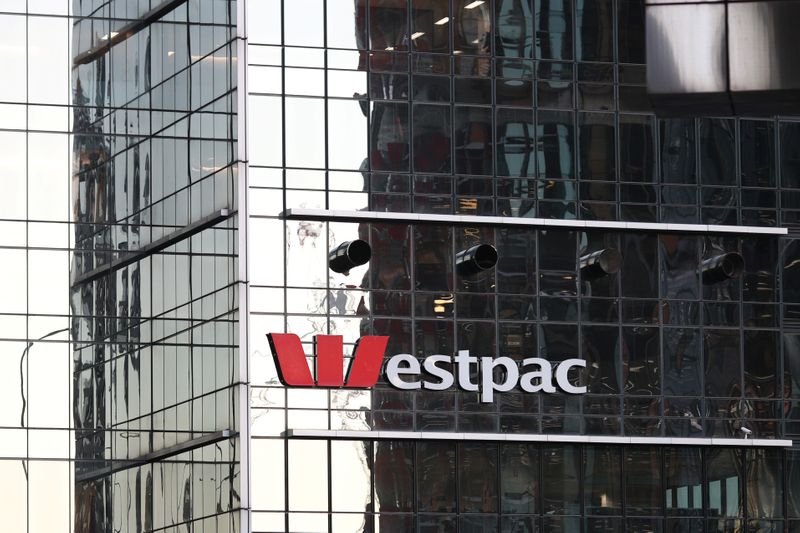 © Reuters. FILE PHOTO: An office building with Westpac logo is seen amidst the easing of the coronavirus disease (COVID-19) restrictions in the Central Business District of Sydney, Australia, June 3, 2020. REUTERS/Loren Elliott

Westpac reported cash earnings for 2020/21 of A$5.35 billion ($4.02 billion), just below expectations but more than twice last year’s result after the release of funds set aside for pandemic losses, and announced a A$3.5 billion share buyback.

However, its shares sank more than 6% to an eight-month low as investors pointed to the fall in margins, particularly in the second half, and higher expenses, which put pressure on core earnings.

“Our underlying results are not where we want them to be, and we recognise we have more to do to become the high-performing company we aspire to be,” Chief Executive Peter King said.

“They are on a far better footing going forward, but the market has focused on the cost of rectification rather than the benefits that flow from this,” said Regal Funds Management portfolio manager Mark Nathan.

A rebound in the Australian economy and sky-rocketing house prices helped drive a 4% rise in Westpac’s mortgage book after a decline last year, but the growth came at the expense of margins.

Net interest margin, a key measure of profitability that measures the difference between what banks charge for loans and what they pay, fell 10 basis points during the second half, to 1.99%. For the full year, it was 4 basis points lower at 2.04%.

In the second half, cash earnings fell at all the bank’s business units, including retail and business banking, institutional banking and its New Zealand subsidiary. Core profit, excluding a pre-announced A$1.3 billion hit from Westpac’s institutional bank and remediation costs, was 13% lower for the year.

Westpac’s King also reiterated his commitment to cutting the bank’s cost base https://www.reuters.com/article/westpac-results-idUSL1N2MQ00W by over a fifth to A$8 billion by fiscal 2024, a key part of his strategy. Still, that is far from the A$11 billion in costs it reported on Monday that excluded an A$2.3 billion one-off “notable” charge.

Westpac said it expects demand for credit to remain high, although home price growth would likely moderate to about 8%, King said, given tighter restrictions on home lending https://www.reuters.com/world/asia-pacific/australia-banking-watchdog-tightens-home-loan-requirements-2021-10-05.

The bank declared a dividend of A$0.60 a share.

Explainer-Why is the yield curve flattening and what does it mean?