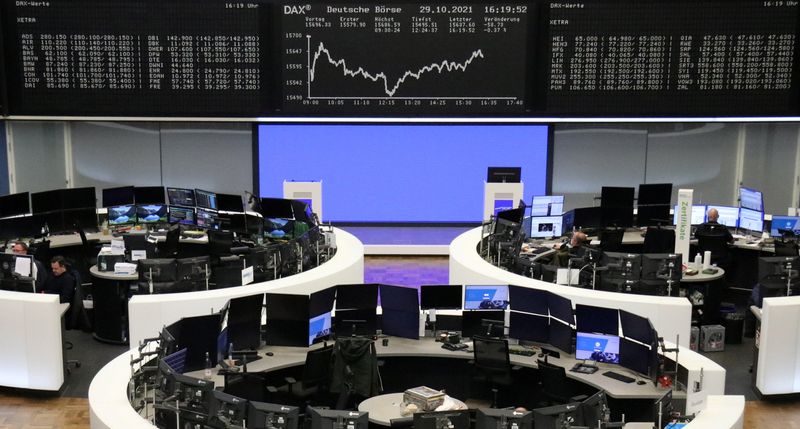 
By Anisha Sircar and Ambar Warrick

(Reuters) -European stocks finished at record highs on Monday, carrying over momentum from October’s gains on the back of strong earnings and as expectations of interest rate hikes supported bank stocks.

The pan-European closed up 0.7% at a record high of 478.87 points, boosted by a 1.4% jump in bank stocks, as euro zone bond yields surged on expectations of rate hikes by the European Central Bank (ECB) next year. [GVD/EUR]

The bank sector touched its highest level in more than two years, and was the best performer for the day.

The bank-heavy Italian and Spanish indexes rose 1.2% and 1.4%, respectively, while the German added 0.8%.

“We spent so much time being afraid of the tapering in September and early October. I think people are now going to see tapering as a positive sign, that you can completely come full circle.”

The STOXX 600 in October recorded its best month in seven with a 4.6% rise, driven by a slew of strong earnings. Refinitiv data last week showed that third quarter earnings in the STOXX 600 are expected to jump 52% from last year.

Investors are now awaiting signals from the U.S. Federal Reserve this week, particularly on when the bank intends to begin tapering pandemic-era stimulus measures.

Among individual stocks, shares in German conglomerate Thyssenkrupp (DE:) and steelmaker Salzgitter rose 2.4% and 1.9%, respectively, after the U.S. and the European Union ended a dispute over steel and aluminium tariffs.

Volkswagen (DE:) inched up 0.4% after saying its Skoda Auto would resume production on Sunday following a two-week outage caused by the chip crisis.

Pandora (OTC:) fell 1.2% after an earnings update from the world’s largest jewellery maker showed weak sales growth at its own stores in the third quarter.

Budget airline operator Ryanair rose 1.2% after it reported its first quarterly profit since before COVID-19. But gains in the stock were stifled as the firm downgraded its annual forecast to a loss.