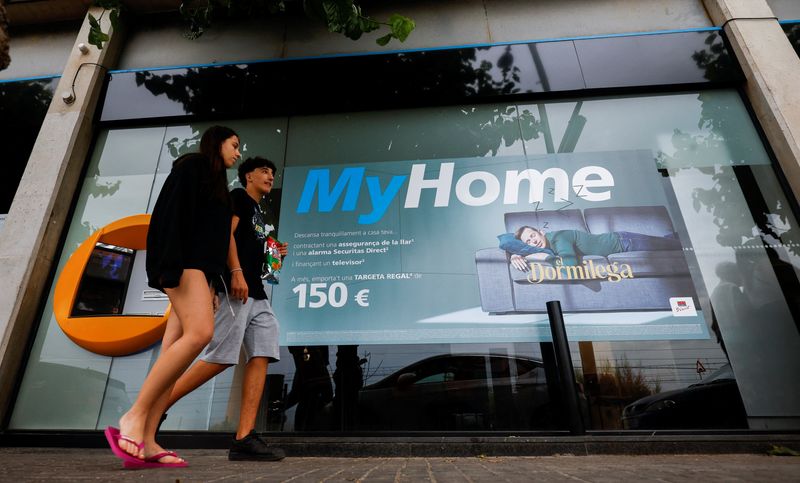 MADRID (Reuters) – Spanish homeowners, fearing a return to the turmoil that nearly bankrupted their country a decade ago, are rushing to shield themselves from rising prices and runaway borrowing costs by striking new mortgage deals that lock in repayment rates.

In a country where according to data from Eurostat around three quarters of the population own their own home, most used to choose floating-rate mortgages, and picked between competing deals from banks as euro zone borrowing costs hit rock bottom.

New applications are surging as house prices soar, but three in four of those are now fixed deals as war rattles confidence and the European Central Bank readies to lift interest rates while markets tank.

They are above all seeking financial security, said Ignasi Viladesau, Chief Investment Officer at Spanish neobank MyInvestor, and similar shifts are under way in Italy and, to a lesser extent, Germany.

In March, 73% – or around around 4.6 billion euros – of new mortgages were fixed-rate deals, up from 56% a year ago, according to Spain’s National Statistics Institute – even though fixed mortgages at that time carried average interest of 2.68% compared with 2.15% for variable deals.

Of total Spanish mortgage debt of almost half a trillion euros, more than 120 billion is tied to fixed rates.

Property prices that rose 8.5% in the first three months of 2022 – the steepest since the third quarter of 2007 – are adding to the uncertainty.

“It’s all driven by an aversion to risk,” said property agent Pablo Rodriguez.

A GAME OF TWO HALVES?

Euro area interbank borrowing rate fixings surged on Tuesday, reflecting a surge in bond yields and huge increases in market expectations for rates this week and illustrating why the shift in mortgage borrowing is not just a Spanish phenomenon.

In Italy, fixed-rate mortgages account for 85% of new home loans compared with less than 30% a decade ago, according to the central bank.

In Germany, conservative borrowers have long favoured fixed repayments but are now locking them in for longer – 14 years on average compared with 13.3 in 2021, according to German mortgage broker Interhyp.

“Many of our customers are concerned. They see the rising interest rate level and feel a certain pressure to secure favourable interest rates quickly.”

Interest in fixed rate deals has also been growing in Portugal, though many there are choosing to stick with cheaper variable rates, a banking source said.

For Rafael Miralles Ponce, associate at Spanish consumer group Adicae, this is no time for borrowers to place their futures “in the hands of a bank”.

“This is like a football match,” he said. “The bank may score the first goal, but then there’s the whole game, and I win by a landslide.”