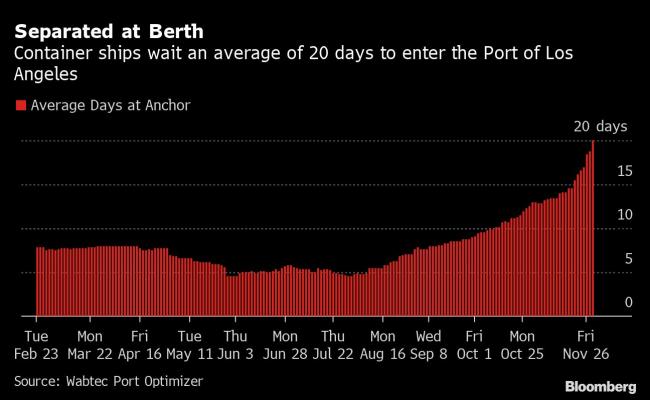 (Bloomberg) — President Joe Biden said his administration’s work has begun to alleviate supply-chain disruptions and that higher inflation is a “natural byproduct” of the global economy’s recovery from the pandemic.

The president, who’s been assailed by his political opponents over rising prices, again sought to reassure Americans that store shelves will be full for the holiday season and persuade them that his policies would build on the economy’s strong rebound.

“I can’t promise every person will get every gift they want on time. Only Santa Claus can keep that promise,” he said in a speech from the White House. But he noted that executives of large retailers have “reported that their shelves are well stocked and they are ready to meet consumer demand for the holidays.”

The president boasted of his administration’s efforts to relieve crowding at U.S. ports, where unprecedented consumer demand has led to long queues for ships and piles of containers full of goods. By prodding unions and port managers to “step up and cooperate more,” the ports have expanded operations and sped up the movement of goods, he said.

And he pointed to reports this week of accelerating prices in Europe and the U.K., in defense of his administration’s own efforts.

“This is a worldwide challenge, a natural byproduct of a world economy shut down by the pandemic as it comes back to life,” he said. “Even accounting for rising prices, the typical American family has more money in their pocket than they did last year, or the year before that.”

The U.S. consumer price index, a broad survey of inflation, increased 6.2% last month from October 2020, the fastest annual pace since 1990. Companies increasingly have passed along increased shipping and transportation costs to consumers, contributing to increasing prices.

While many economists believe the abnormal inflation is due to unprecedented consumer demand following the pandemic shutdowns, Republicans have blamed Biden and his economic policies.

Biden took a swipe at his political opponents, some of whom he said are “rooting” for inflation in the belief it’ll benefit their party in next year’s elections. Florida Senator Rick Scott, a Republican, told the Wall Street Journal that inflation is a “gold mine” for his party.

“I don’t want to speculate on anyone’s motive but it’s always easier to complain about a problem than to try to fix it,” Biden said.

He said his $1.75 trillion “Build Back Better” legislation, which is stalled in Congress, would help families contend with inflation by reducing the costs of child and elderly care, “housing, college, health care and prescription drugs.”

“These are the biggest costs that most families face,” he said.

Widespread public anxiety about the economy has forced Biden to repeatedly address the issue in speeches, trips and other events in recent weeks. He’s also sought to cast policies driven by the progressive wing of his party, including federal support for child care, expanded preschool and health insurance premiums, as inflation-fighting.

Despite efforts to ease congestion, long delays continue at the ports of Los Angeles and Long Beach, which combine to handle 40% of the U.S.’s inbound containers. Forty-nine container vessels were anchored off their coasts as of Tuesday, seemingly an improvement from the more than 80 waiting a few weeks ago.

However, much of the decrease stems from a new queuing system for ships that keeps them farther away from the coast and slows their progression across the Pacific Ocean, said James Kipling Louttit of the Marine Exchange of Southern California, a nonprofit involved in maritime traffic.

“All it does is move the parking lot,” he said.

Companies operating at the two California ports — which together are the nation’s busiest — have agreed to eliminate fees for shipping containers picked up at night and on weekends, instead of during peak hours. And one of the world’s biggest ocean carriers is offering as much as $200 per container in incentives for importers to help clear the ports’ backlog by retrieving their goods faster.

The ports have said they’re considering charging fines for containers that sit on the docks for too long, and that the threat of penalties has helped ease bottlenecks.

“Gas supply companies are paying less and making a lot more. And they do not seem to be passing that on to the consumers at the pump,” he said during remarks on Nov. 23. “Instead, companies are pocketing the difference as profit.”

The White House applied a similar tone in a blog post Monday.

“And with prices for shipping dropping 20% in November, retailers will hopefully be able to begin passing on those savings to consumers soon,” it said.

Polls indicate a majority of voters believe the country is headed in the wrong direction, despite reduced unemployment and growing economic output under Biden.

Many of the supply-chain issues facing the U.S. are largely out of Biden’s control and the White House has acknowledged there isn’t a quick fix.

That includes a global shortage of semiconductors, which continues to cause supply disruptions for cars and electronics.

The White House supports legislation to encourage domestic research and manufacturing of chips but the measure has been stuck in Congress for months. And even after it passes, the impact would not be felt for years, making it a long-term solution that doesn’t help alleviate the immediate supply crunch. 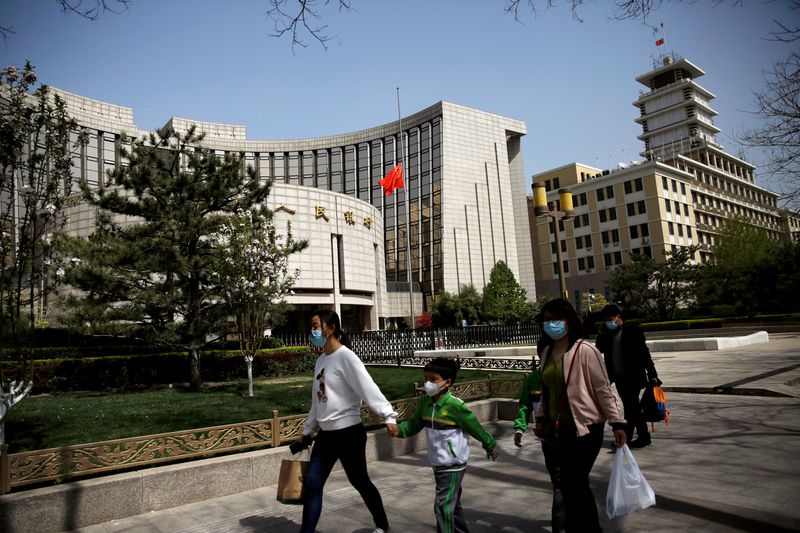 The statement from the People’s Bank of China (PBOC), made following its fourth-quarter monetary policy committee meeting, is the latest sign that Chinese regulators are marginally easing curbs on the property sector to prevent a hard-landing.

The PBOC said it will keep its monetary policy flexible and appropriate, and liquidity reasonably ample. It will strengthen support to the real economy, with a bias toward small companies.

The central bank reiterated that it will deepen reforms of the forex market and increase the flexibility of the yuan’s exchange rate while guiding companies and financial institutions to be “risk neutral”. 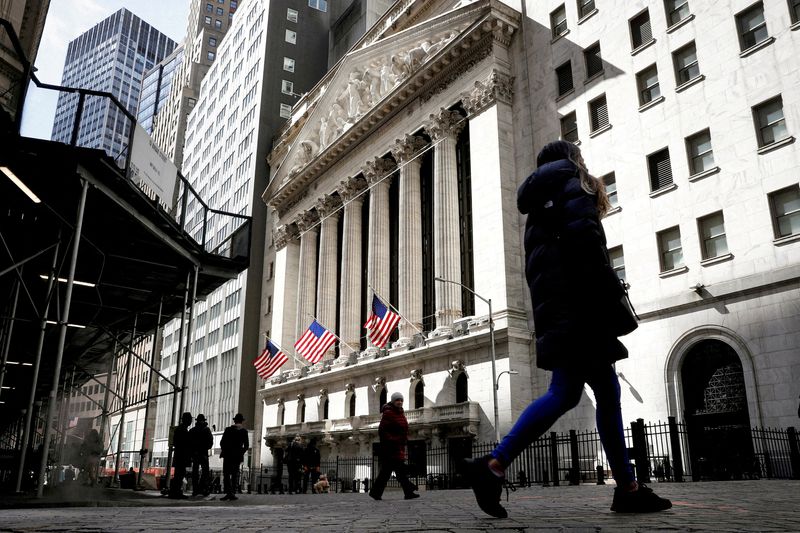 By Kane Wu and Julie Zhu

But the securities regulator’s new filing-based system, designed to rein in once freewheeling Chinese listings in the U.S. market and elsewhere, leaves open questions about rule enforcement and compliance criteria, they added.

The China Securities and Regulatory Commission published draft rules https://www.reuters.com/markets/europe/china-securities-regulator-says-vie-compliant-companies-can-list-overseas-2021-12-24 late on Friday requiring filings by companies seeking offshore listings under a framework to ensure they comply with Chinese laws and regulations.

Companies using a so-called variable interest entity (VIE) structure will still be allowed to seek offshore listings as long as they are compliant, removing uncertainty for investors who feared China would block such listings.

That risk loomed large after Didi Global Inc’s U.S. listing in July sparked a major regulatory backlash from Chinese officials, who were concerned over national security.

The VIE structure has been used by most overseas-listed Chinese tech companies, such as Alibaba (NYSE:) and JD (NASDAQ:).com, to skirt Chinese restrictions on foreign investment in certain sectors.

Uncertainty over the future of VIE structures, coupled with China’s regulatory crackdowns in major sectors such as e-commerce and tutoring, has bashed shares in offshore-listed Chinese companies this year.

And while Chinese firms raised $12.8 billion in the United States this year, the value of deals ground to a halt after Didi’s July listing. In Hong Kong, the value of IPOs in 2021 fell to $26.7 billion from the previous year’s $32.1 billion, according to Refinitiv data.

Reaction to the new rules will be seen Monday when the U.S stock market resumes trade after closing on Friday for the Christmas holiday. Hong Kong stocks will resume trading on Tuesday.

The planned filing-based system is also expected to ease uncertainty by calling for closer coordination between the securities regulator and various industry regulators, such as the cyberspace watchdog.

But it remains unclear how the rules would be enforced and compliance determined, especially when a VIE structure is used to circumvent foreign investment restrictions, the CICC note said.

The investment bank added that even if a company plans a Hong Kong listing, which would pose no risk to national security, “we still suggest the issuer voluntarily contact the Cyber Administration of China () for its nod” before going to the securities regulator.

Winston Ma, adjunct professor at NYU Law School, stressed that cross-border data security had become critical in the global digital economy and was a main driver for the latest move.

“As such, under the proposed new rule, cybersecurity review must be completed before the (security regulator’s) clearance process,” Ma said.

Public consultation on the draft rules will remain open until Jan. 23.

More than 10,000 Russian troops returning to bases after drills near Ukraine -Interfax 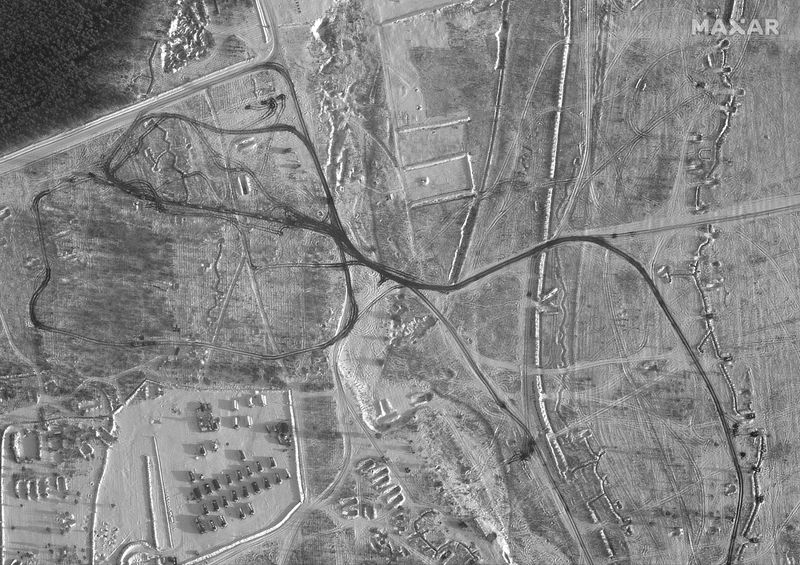 
MOSCOW (Reuters) – More than 10,000 Russian troops have been returning to their permanent bases after month-long drills near Ukraine, Interfax news agency reported on Saturday, citing the Russian military.

Interfax said the drills were held in several regions near Ukraine, including in Crimea, which Russia annexed in 2014, as well as in the southern Russian regions of Rostov and Kuban.

Russia’s deployment of tens of thousands of troops to the north, east and south of Ukraine had fuelled fears in Kyiv and Western capitals that Moscow was planning an attack.

Russia denies any such plans, saying it needs pledges from the West – including a promise from NATO not to expand the alliance eastward towards Russian borders – because its own security is threatened by Ukraine’s growing ties with the Western alliance.

Moscow also says that it can deploy its troops on its territory as it sees fit.

Estimates for the number of Russian troops recently moved closer to Ukraine vary from 60,000 to 90,000, with one U.S. intelligence document suggesting that number could be ramped up as high as 175,000.

“A stage of combat coordination of divisions, combat crews, squads at motorized units… has been completed. More than 10,000 military servicemen… will march to their permanent deployment from the territory of the combined arms’ area of drills,” Interfax quoted the army as saying.

Dollar Down, Yen Reacts to Bank of Japan Policy Decision

Oil rises to more than 7-year high on Mideast tensions

Brent Crude Trades Near Highest Since 2014 on Tightening Market

403 Forbidden You don’t have permission to access /news/cryptocurrency-news/panther-protocol-cofounder-oliver-gale-discusses-bringing-zeroknowledge-technology-to-multichain-2740735 on this server. Apache/2.4.6 (CentOS) Server at www.investing.com Port 80

Dollar fails to catch a lift from higher yields, Bank of Japan in focus

After flying start, Stellantis must tackle Tesla and China