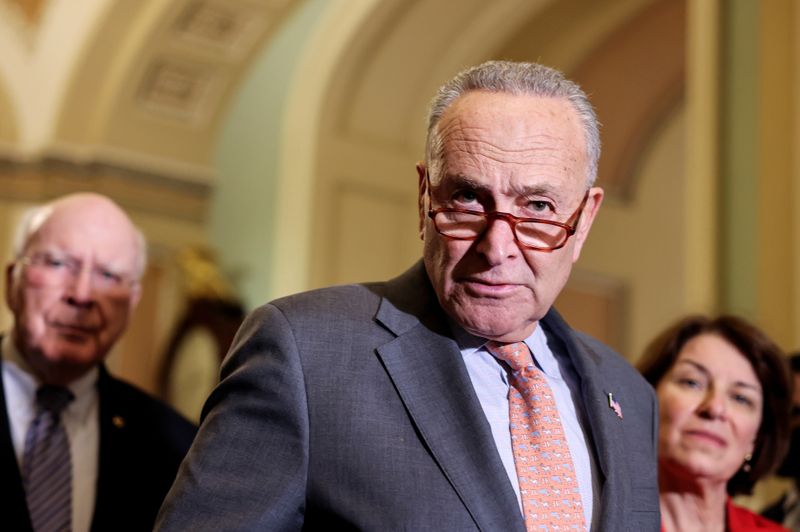 By Richard Cowan and Makini Brice

WASHINGTON (Reuters) – One day after Senator Joe Manchin appeared to stymie efforts to advance a bill that is a centerpiece of President Joe Biden’s legislative agenda, the measure showed new promise for moving to the full House of Representatives for a vote on passage.

Democrats on Tuesday sought to conclude negotiations surrounding Biden’s Build Back Better plan, a $1.75 trillion framework on social spending and climate change that he unveiled last week. On Monday, influential Democrat Manchin refused to commit to support the legislation, rebuffing a previous demand by progressives.

Yet in the House, the bill showed signs of moving forward following a series of stops and starts in closed-door negotiations.

Democratic Representative Jim McGovern, the chairman of the powerful House Rules Committee, told reporters the bill could be ready for his panel to process and send to the full House this week.

“Not today, but maybe tomorrow,” McGovern said of the possible timing.

His comments came as Democrats cited progress on two controversial items that had been sticking points – prescription drug pricing and loosening a cap on state and local tax deductions, often referred to as SALT, which is important to high-tax coastal states that help comprise the Democratic Party’s base.

The agreement included measures to impose a cap on annual out-of-pocket spending and to allow Medicare, the American health insurance program for the elderly, to negotiate drug prices.

“Fixing prescription drug pricing has consistently been a top issue for Americans year after year, including the vast majority of both Democrats and Republicans who want to see a change because they simply cannot afford their medications,” said Schumer.

Elsewhere, Jimmy Gomez, a California congressman and a member of the tax-writing House Ways and Means Committee, said he thought a measure changing the 2017 cap on state and local tax deductions – imposed during a tax overhaul signed by then-President Donald Trump – would be inserted into the bill.

“There are too many members in the New Jersey and New York delegations” seeking that to ignore the matter, Gomez said.

Josh Gottheimer, Tom Suozzi and Mikie Sherrill, three lawmakers from New York and New Jersey who had been vocal proponents for repealing the cap, called the status of negotiations “encouraging.”

Following a closed-door meeting of House Democrats, some lawmakers said Pelosi might seek House passage as soon as Thursday on both a $1 trillion bipartisan infrastructure package passed earlier in the summer by the Senate and the Build Back Better legislation, although it was not certain that such a swift schedule could be achieved.

Progressives have sought to include changes to the immigration system in the reconciliation bill. But that could make for a difficult vote for Democrats in predominantly Republican states, Gomez said, and would be subject to a ruling by the Senate parliamentarian on whether it could be included.

Separately, Pramila Jayapal, the chair of the nearly 100-member Congressional Progressive (NYSE:) Caucus, said negotiators were working on the details of implementing a new child care benefit so that the government could “get benefits out to people as quickly as possible.”

It was also unclear whether an expansion of Medicare — a demand of Senator Bernie Sanders and other progressives — would make it into the bill, Jayapal said.

A group of five moderate lawmakers – enough to potentially sink a bill in the closely divided House – wrote in a letter to Pelosi on Tuesday that they could not back the reconciliation bill without an estimate of how it would affect the budget and at least 72 hours to review it.

It is not clear when the budget scores by the Congressional Budget Office or the Joint Committee on Taxation would be ready. Such demands, if accepted by the speaker, would mean it would be impossible to pass the legislation in the House this week.