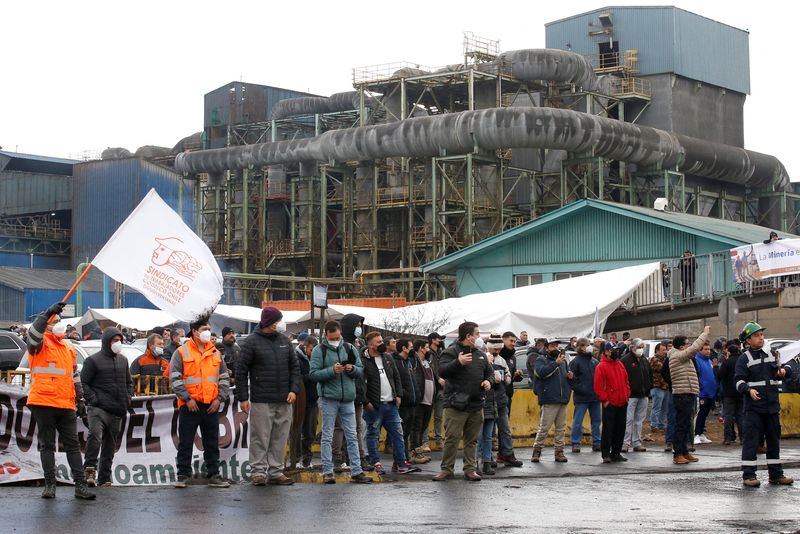 © Reuters. Workers of Codelco’s Ventanas copper smelter take part in a nationwide strike in protest against the government’s and the company’s decision to close the smelter in Ventanas, Chile, June 22, 2022. REUTERS/Rodrigo Garrido


By Natalia A. Ramos Miranda

SANTIAGO (Reuters) -Union leaders at Chile’s state-owned mining firm Codelco, the world’s largest copper producer, reached an agreement with the company on Thursday to end a national strike over the decision to close a smelter located in a highly polluted area.

The Federation of Copper Workers (FTC), an umbrella group of Codelco’s unions, started the strike early Wednesday morning after Codelco’s board of directors decided to close its Ventanas smelter on Friday.

“We’re officially declaring the end of the strike,” Amador Pantoja, president of the FTC said to reporters outside of Codelco’s headquarters in Santiago after hours of negotiations, adding that strike leaders were already lifting blockades around the country.

Workers had blocked roads outside Codelco facilities around the country, lit fires, and held up banners and Chilean flags calling for more investment in the smelter.

After spending nearly $156 million over a decade to reduce emissions at the smelter, Codelco decided to close it due ongoing health concerns in the surrounding community, which is home to several industrial companies, citing the smelter’s outdated technology which made it harder to curb emissions.

About 350 people worked at the smelter.

Thursday’s agreement does not include more investment in the troubled Ventanas smelter, but it involved strengthening the Ventanas copper refinery, Pantoja said without elaborating.

“That lets us look forward with optimism and hope,” Pantoja said.

Andre Sougarret, Codelco’s interim chief executive, said that the company was starting a working dialogue with workers starting Monday regarding the closure of the Ventanas smelter.

“We’re with the workers; we plan on meeting their demands,” Sougarret said, saying that retraining, relocation and exit packages were on the table for workers currently employed at the smelter.

Closing the smelter will take years, according to Sougarret and the process is reliant on Congress modifying a law that forces the company to use the Ventanas smelter, which could take months.

The smelter is located in a populated area filled with industrial companies and has been the site of multiple pollution incidents that have affected residents’ health and prompted environmental emergencies, including one earlier this month that caused the Ventanas smelter to close.