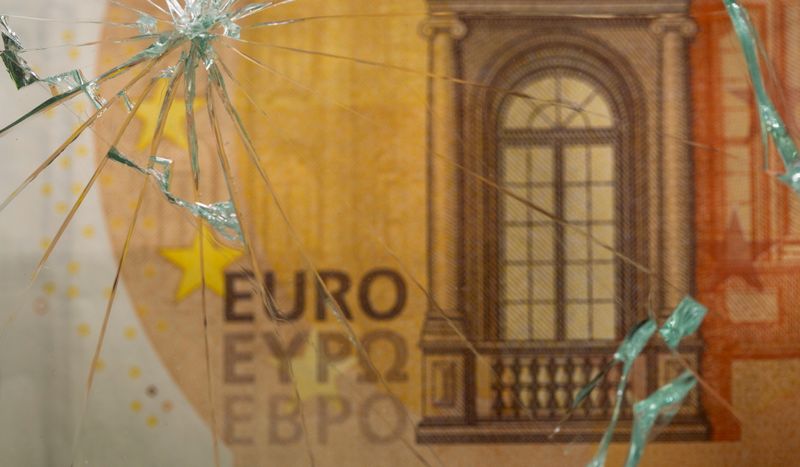 
By Julien Ponthus and Yoruk Bahceli

LONDON (Reuters) – COVID-19 lockdowns have returned anew to haunt Europe’s economic prospects, forcing investors on Friday to reassess portfolios and sell vulnerable assets such as the euro and bank stocks.

Days after the Netherlands, Hungary, Slovakia and the Czech Republic reimposed curbs, Austria put itself back under lockdown and Germany’s health minister refused to rule out one.

Markets were little soothed by Germany’s foreign minister ruling out a lockdown and mandatory vaccinations for all to tabloid Bild.

The developments upended the buoyant mood in European equity markets where French and German shares had hit a string of record highs, thanks to a strong earnings recovery.

A pan-European equity index, up 80% from March 2020, slipped half a percent on Friday.

“One thing is certain, if the whole of Europe had to go under lockdown once more, and depending on how long that would last, we would need to rethink our growth scenarios,” said Stephane Ekolo, a global equity strategist at the brokerage Tradition.

As markets started scaling back wagers on euro zone interest rate rises for next year, an index of European banks plunged 2.5%, its biggest daily drop since late September.

The question now is to what extent lockdowns might hammer expectations for fourth-quarter earnings. Refinitiv I/B/E/S currently flags a 51% rise for the benchmark, only marginally below 60% in Q3.

It still compares favourably with predictions of a 21% earnings growth for companies.

But some ominous signs had emerged for Europe even before the latest COVID resurgence. European data lags U.S. equivalents by the biggest margin in over a year, according to economic surprise indexes compiled by Citi.

“Markets have been aware for a few weeks now that this winter will be difficult and that the vaccination rollout doesn’t reduce lockdown risk by 100%,” said Emmanuel Cau, head of European equity strategy at Barclays (LON:).

The setback, if it deepens, will prove painful to many. BofA’s widely followed monthly investor survey showed funds most bullish on euro zone equities, with a 33% “overweight” and EU banks especially in favour.

Cau says it is too early to see the lockdowns as a gamechanger and that investors are booking profits off recent sizzling rallies. And deeply negative inflation-adjusted bond yields probably means that the tsunami of cash chasing global stocks will not ebb entirely.

And there will be winners: healthcare stocks rose 1% on Friday, while the technology sector gained 0.6%.

Investors made a beeline for bonds, turning Germany’s entire yield curve negative for the first time since August as 30-year government borrowing costs fell below 0%.

Ten-year yields, the euro area benchmark, dropped as much as 6 basis points to the lowest since mid-September at -0.342%.

The euro tumbled to more than six-year lows versus the Swiss franc and approached 16-month troughs against the greenback.

“It’s just building, that story of the pandemic not being quite over in Europe and that’s a knee-jerk flight to quality,” said Peter McCallum, rates strategist at Mizuho.

“The more that becomes a theme and we get the market thinking about a dovish ECB….we’ve got some room to fill the (10-year Bund yield) gap down to -0.45%,” he added.

Some market watchers are starting to look beyond Europe.

Deutsche Bank (DE:) noted that on the cusp of winter, vaccination rates in Austria and Germany at 64% and 69% were well above the U.S. 58% level.

“Although all the headlines are in Europe at the moment, will the United States be more vulnerable than many European countries over the course of the full winter?” the bank wrote.