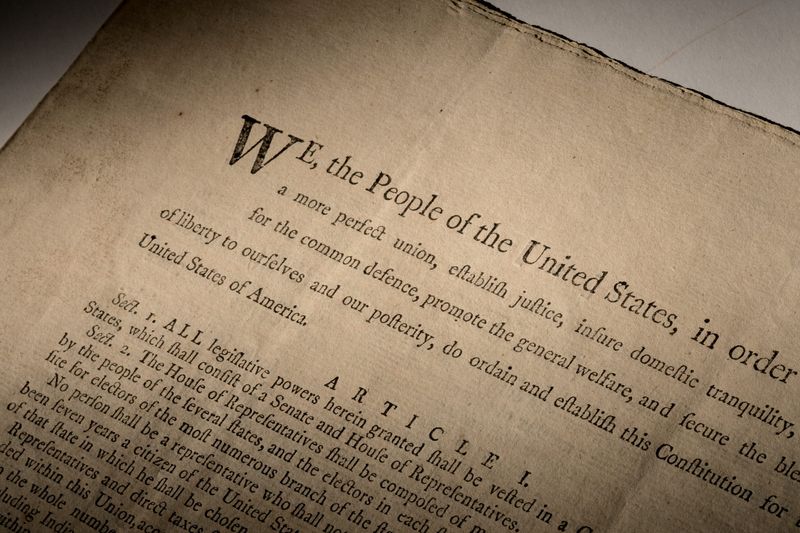 © Reuters. An extremely rare official first-edition printed copy of the U.S. Constitution as adopted by delegates to the Constitutional Convention in Philadelphia in 1787, which will auctioned off in mid-November 2021 by Sotheby’s in New York, is seen in this hand


LONDON (Reuters) – An online group has raised more than $46.6 million in cryptocurrency funds to bid on an original copy of the U.S. Constitution for sale at Sotheby’s auction house on Thursday.

The group, called “ConstitutionDAO”, set up a crowdfunding page in which people can pay in the digital currency ether to contribute to the funds, which they say will be used to bid on a rare copy of the U.S. Constitution at Sotheby’s.

The extremely rare official first-edition printed copy of the U.S. Constitution, which was adopted by America’s founding fathers in Philadelphia in 1787, is estimated by Sotheby’s to be worth $15 million to $20 million. The auction begins at 7 p.m. EST.

The ConstitutionDAO website says that those who contribute funds will become members of the Decentralised Autonomous Organisation, or DAO, but will not themselves have an ownership stake in the document if the group has the winning bid.

A DAO is a kind of online community which can use blockchain technology to allow members to suggest and vote on decisions about how it is run, for example by using crypto tokens to cast votes.

ConstitutionDAO’s website says that the people who contributed would not receive fractionalised ownership of the valuable item itself, but instead a “governance token”, which will give them the ability to “advise” on what happens to it.

More than $46.6 million worth of funds, or 11,513 ether, had been paid into the project so far as of 3:26 p.m. EST, according to the crowdfunding website Juicebox. Juicebox’s website said its crypto crowdfunding is “experimental software” and advised user caution.

“The total raised will not be reflected here, nor on any other sites related to this project, until after the auction is over,” the ConstitutionDAO website said.

One of the people behind the project, Alice Ma, told Reuters the fundraising was set up by a group of 34 people listed on the ConstitutionDAO website. Some of these are listed under pseudonyms.

The bidding will be done by the group’s “fiscal sponsor”, called Endaoment, which will take “interim legal ownership” of the document, a set of FAQs by ConstitutionDAO said.

“After the initial purchase, the community will be able to restructure ownership to best reflect the mission and values of the DAO,” the FAQs said.

The ConstitutionDAO website said the funds raised will be kept in a wallet jointly-controlled by 13 team members and would be returned for refunds if the group loses the auction.