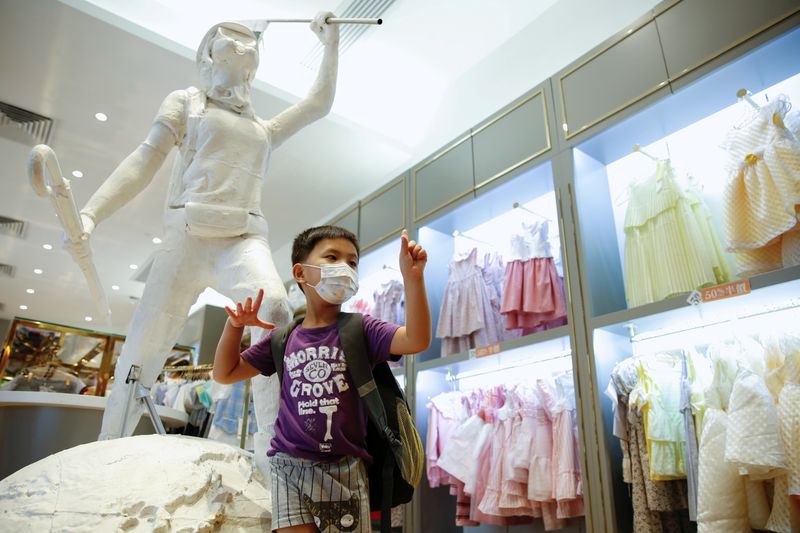 
HONG KONG (Reuters) – A Hong Kong clothing chain popular with democracy supporters said on Thursday it will shut its stores by the end of 2022, citing landlords’ reluctance to renew leases and complaints leading to investigations by various government departments.

It gained popularity among democracy activists last year when owner Herbert Chow refused a request from his landlord to remove a statue of a protester in helmet, gas mask and goggles. The shop moved to a new location where the statue is still up.

In early May, national security police cordoned off the area of a Chickeeduck shop and searched its premises with a warrant, with police saying they responded to complains from the public. This month, authorities ordered one of the shops to remove a bronze statue of Nobel Peace Prize winner Liu Xiaobo outside the entrance, saying it obstructed the street.

“Chickeeduck has been experiencing disturbance from evil forces in the past 18 months,” Chow said in a statement.

“We have never given up on voicing out against injustice and will never consider backing off. However, the feasibility of the business going forward is now in question and we are thinking of wiser and more sustainable strategies for the company.”

The government’s Security Bureau and the Hong Kong police did not immediately respond to requests for comment.

Chow did not elaborate on the future strategy after his 32-year-old company’s “exit” from the Hong Kong market, but said the firm planned to continue as a “brand for Hong Kongers.”

The “Liberate Hong Kong” slogan was “capable of inciting secession,” a major offence under the city’s national security law imposed by Beijing in 2020, a judge ruled earlier this year.

UAE says it signs agreements worth around $6.1 billion during Dubai Airshow so far