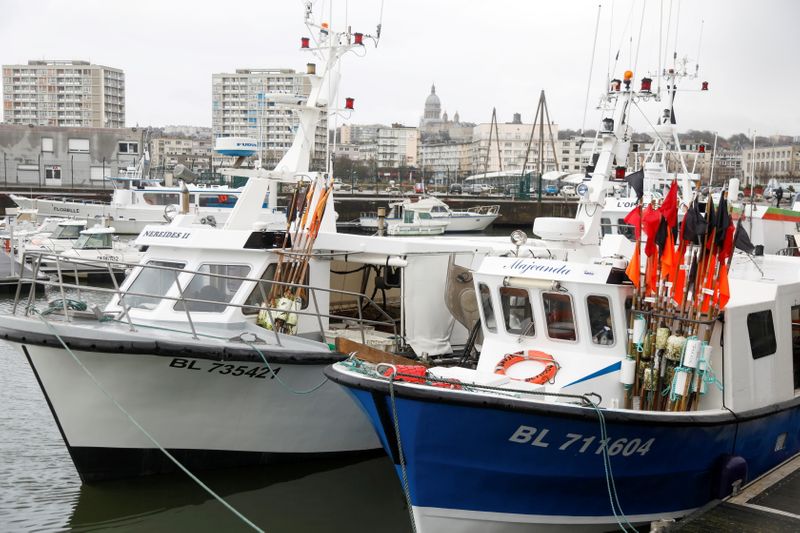 By Layli Foroudi and Clotaire Achi

BOULOGNE-SUR-MER, France (Reuters) – People who earn a living from fishing in the English Channel battened down the hatches on Monday for an escalation of a Franco-British row over fishing licences that they anticipate will be costly on all sides.

France alleges Britain is not honouring a post-Brexit deal https://www.reuters.com/world/uk/post-brexit-fishing-rules-heart-new-uk-france-clash-2021-10-28 on access to British fishing grounds and has said that from midnight (2300 GMT) on Monday it will retaliate https://www.reuters.com/world/europe/brexit-france-readying-sanctions-if-uk-withholds-fishing-licences-2021-10-27 by stepping up checks on trucks coming from Britain and barring British trawlers from docking in French ports.

Olivier Leprêtre, president of the regional sea fishing committee for northern France, said he had advised his group’s members to steer clear of British waters, in case they were caught up in tit-for-tat British measures.

Tracking data for marine traffic in the English channel on Monday afternoon showed that most of the French fishing fleet were staying close to their shorelines. British trawlers were also staying in their own sector.

Lepetre said France needed to take tough action on Britain, but his members also worried about collateral damage from a worsening row.

Britain’s government on Monday issued its own threat to France, telling Paris it had 48 hours https://www.reuters.com/world/uk/britain-warns-france-back-down-48-hours-or-face-trade-trouble-2021-11-01 its planned retaliatory measures, or face legal action.

Stephane Pruvost is boss of sea food processing firm JP Marée, one of several in the port of Boulogne which import part of their raw materials from Britain.

He said he feared disruption to his supply chain on Tuesday if France follows through on threats to step up checks on trucks entering France from Britain at the port of Calais, and arriving in Boulogne.

“Is blocking imports the solution?” he asked, in an interview with Reuters.

Referring to French President Emmanuel Macron, he said: “Macron isn’t aware of the effects of all of this. We are only listening to the voice of the fishermen and not anyone in any other stage of the chain.”

Stephane Fournier, a 44-year-old fisherman in Boulogne-sur-Mer, is among dozens waiting for Britain to issue his vessel with a licence to fish in its waters.

He said France had to retaliate against Britain, even if there is blowback for French fishing crews.

“I prefer losing one month’s salary to losing our livelihood, our way of life,” he said.

The row being played out between London and Paris over fishing licences was, he said, a “political game with pride on each side and we are in the middle watching the match”.

In blow to Biden, Joe Manchin will not commit to backing $1.75 trillion spending bill

One of the largest banks in the world, Credit Suisse bank is experiencing a “critical moment”, said the CEO of the financial institution, Ulrich Kerner, in a memo. It is reported by TheStreet.

He expressed his understanding that there is a lot of uncertainty and speculation both inside and outside the company. According to Kerner, there will be more rumors and speculations in the future.

The outlet emphasizes that Credit Suisse bank is currently struggling for survival. A year ago the market capitalization of Credit Suisse was $22.3 billion; now it is only $10.4 billion. Over the past year, the stock of the financial institution has fallen by 56.2%.

If Credit Suisse goes bankrupt, the market could be in for a shock, experts predict. Kerner argues that Credit Suisse is in restructuring for a longer-term and sustainable future.

Earlier it became known that the second largest banks in Switzerland, Credit Suisse and Deutsche Bank, faced financial difficulties. Against this background, the share price of Credit Suisse on Monday, October 3, declined to a historical low of 3.518 francs, or about $3.55.

Earlier we reported that the European Commission is preparing for possible blackouts due to the crisis.

China earns hundreds of millions of dollars on reselling LNG from the US to European companies. Local Asian companies are sending tankers carrying U.S. LNG to help the European Union prepare for the winter heating season, The Wall Street Journal reported, citing sources.

Reselling LNG from the US to European companies is observed due to the reduction in demand for gas to China. As a result, local companies profitably sell surplus feedstock abroad, primarily to Europe.

“In the first eight months of this year, only 19 LNG ships docked at Chinese ports, compared to 133 such ships in the same period last year, meaning a significant portion was diverted to buyers in Europe, as well as Japan and South Korea. US LNG exports to Europe are profitable for China and the United States,” the article says.

On October 3, analysts at the International Energy Agency (IEA) predicted that in February 2023 the storage of gas in the European Union will be up to 5% empty without supplies from Russia. At the same time, the situation will be affected by the reduction of LNG imports to Europe. For comparison, at the end of September 2022, gas storages in EU countries were 90% full.

Earlier we reported that Europeans derailed the EU energy saving plan due to the refusal to save gas.

Europe has failed its first winter test of EU energy consumption because of Europeans who refused to save gas. This was stated by Bloomberg analyst Javier Blas.

“If Europe had been a schoolboy, it would have passed its first energy conservation test last week. It failed. And that doesn’t bode well for the much tougher tests that lie ahead in January,” Blas said.

According to him, the demand for gas from the population of Europe is seasonal. At the same time, the EU energy commission did not know how residents would react to the call to save money. However, the first frosts have shown that people are not ready to reduce their energy consumption. During the recent autumn cold snap in Germany, for example, residents increased their gas consumption by 14.5 percent, higher than the five-year average.

He added that the high demand for gas should be a wake-up call for the EU energy commission, which should use concrete examples to show people what they need to do to save energy. At the same time, politicians should offer all possible options to save energy and distribute them before the onset of cold weather, which could occur in the coming weeks.

Earlier, we reported that businesses predicted a 500 percent increase in energy costs in the U.K.