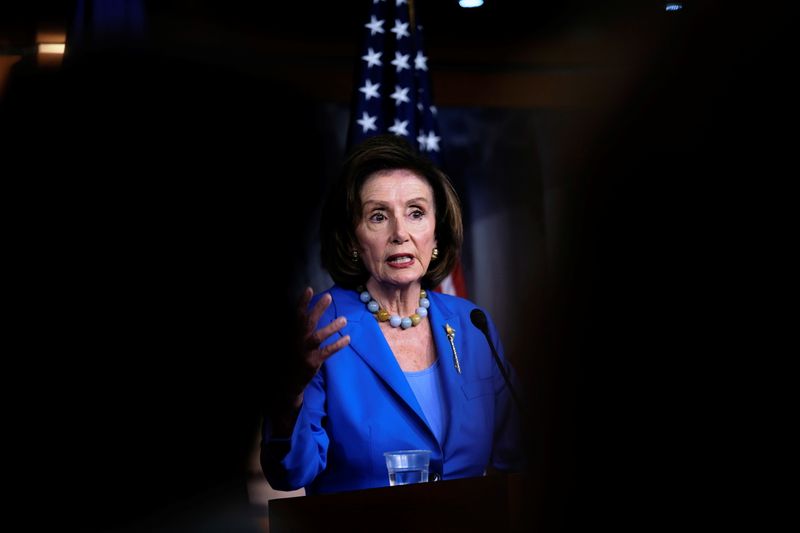 The vote was originally scheduled for Thursday evening after the Congressional Budget Office (CBO), a nonpartisan arbiter, released a cost assessment of the bill, which several moderate Democrats said they needed before they would vote.

But the vote was delayed until 8 a.m. (1300 GMT) on Friday after McCarthy spoke – and often seemed to stray – from a thick binder of prepared remarks for more than four hours, at times shouting over Democrats in the House who were openly dismissive of his obstruction.

Democrats in the House were attempting to advance Biden’s $1.75 trillion domestic investment bill, despite the CBO’s finding that it would add to the deficit.

“I’ve had enough. America has had enough,” McCarthy said in his speech that cataloged a list of Republican grievances, some related to the bill and some not.

The House voted 220-211 to approve the rule for debating the measure, clearing the way for a vote on passage later in the night. No Republicans supported the move.

McCarthy was occasionally interrupted by Democrats.

Democratic Representative Alexandria Ocasio-Cortez described it in a video posted on social media as “one of the worst, lowest quality speeches” she had ever seen.

“It is stunning to me how long a person can talk (while) communicating so little,” she said.

Earlier, the CBO said the legislation would increase federal budget deficits by $367 billion over 10 years, although it acknowledged that additional revenues could be generated through improved Internal Revenue Service tax collections.

The CBO estimated that the new tax enforcement activities would generate a net increase in revenues of $127 billion through 2031. The White House estimates the changes will generate $400 billion in additional revenue and said the bill overall will reduce deficits by $121 billion over a decade.

Several of the moderate Democrats who had wanted to see the CBO “score” before voting said they accepted the White House’s math.

“We put in the work and look what we got — a Build Back Better Act that’s fully paid for, reduces the deficit and helps American families,” said Representative Carolyn Bordeaux. “Now it’s time to pass it.”

Representative Stephanie Murphy said she had reservations about the size of the legislation but there were “too many badly needed investments in this bill not to advance it in the legislative process.”

If passed, the bill would be in addition to the more than $1 trillion infrastructure investment legislation that Biden signed into law this week.

The new bill provides free preschool for all 3- and 4-year-olds, boosts coverage of home-care costs for the elderly and disabled, significantly lowers the cost of some prescription drugs such insulin, expands affordable housing programs and increases grants for college students.

The two measures comprise the twin pillars of Biden’s domestic agenda and would be on top of the $1.9 trillion in emergency coronavirus pandemic aid that Biden and his fellow Democrats pushed through Congress in March over a wall of opposition from Republicans.

Democrat House Majority Leader Steny Hoyer called the bill “transformational,” adding that its success “will be measured in the deep sense of hope that Americans will have when they see their economy working for them instead of holding them back.”

Republicans have vowed to withhold their support, leaving Democrats to employ a special “budget reconciliation” procedure that would allow them to ram the legislation through the Senate with a simple majority vote, instead of at least 60 votes in the 100-member chamber normally needed to advance measures.

If it passes the Democratic-controlled House, it would go to the Senate for consideration, where two centrist Democratic members have threatened to hold it up. Senators are expected to amend the House bill. If so, it would have to be sent back to the House for final passage, possibly around the end of December.

Democrats have a 221-213 majority in the House and can only afford to lose three Democratic votes on the bill since no Republicans are expected to vote for it. One Democrat said on Thursday evening he intended to vote against it, due to tax breaks that would favor rich Americans.