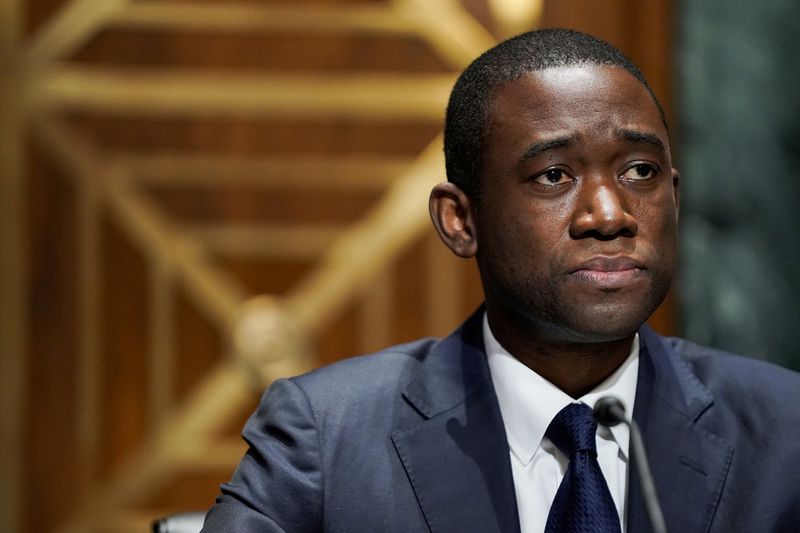 Increased IRS enforcement to collect unpaid taxes makes up the largest source of revenue in the legislation to be considered by Congress this week, and Deputy U.S. Treasury Secretary Wally Adeyemo told Reuters that a revived fear of audits among wealthy Americans will deter tax avoidance.

Paying for the Build Back Better plan https://graphics.reuters.com/USA-BIDEN/myvmngedbpr/biden-offsets.jpg

While many of Biden’s original investment priorities have been shrunk or cut from the bill, plans to invest $80 billion in the IRS over a decade survived. Approval would allow for the hiring of thousands of new enforcement staff and replacing antiquated computer systems in coming years.

“When you are focusing on audits and people see that audits are happening — especially amongst people who are situated similar to them — you have better compliance,” Adeyemo said during a visit to Philadelphia to promote the bill’s increased Child Tax Credit benefits.

“When they see more cops on the beat looking at tax returns, what people will decide is that it’s better to pay than to pay the penalty in the end.”

After years of budget cuts and underinvestment, largely under Republican-controlled Congresses, the IRS has 17,000 fewer enforcement employees than a decade ago. The audit rate for individuals had fallen to 0.4% in fiscal 2019, half the 0.8% rate in 2015 and far below the 1.98% rate in 1977.

IRS Commissioner Charles Rettig, who was appointed by the Trump administration, told senators in April that the agency is “outgunned” by increasingly sophisticated tax avoidance schemes that underreport business income and capital gains, leaving a “tax gap” between owed and collected taxes as high as $1 trillion a year.

Treasury previously had higher ambitions for using IRS enforcement to shrink the tax gap by $700 billion over a decade, about 10% of its $7 trillion estimated tax gap.

But that policy proposal relied on Congress approving new requirements for banks to report account inflows and outflows of as little as $600 per year to enable the IRS to find audit targets by matching account activity with reported income.

The $600 threshold raised some lawmakers’ concerns about financial privacy and the provision was dropped from Biden’s revised spending plan last week.

Adeyemo said the IRS will still be able to use more sophisticated technology, including machine learning, to better target the wealthiest individuals as it invests in new systems and hires more agents.

The bill’s proposed tax surcharge of 5% on adjusted gross income above $10 million and 3% above $25 million may motivate wealthy individuals to hire more sophisticated tax lawyers, he said, but the IRS aims to meet this challenge.

“The question becomes how do you use the resources of the IRS to verify and validate and where that is not possible to go out and ask questions. And we’ll have a bunch more people who can ask those questions,” Adeyemo said.

Adeyemo called the $400 billion revenue target for the IRS investments a “conservative” estimate, but said the agency will need to take stronger action to fully close the tax gap.

“We’re not going to be able to close the entire gap with these resources, but we do think that we’re going to make a significant dent.”

Current inflation in Argentina reached 82.2% in September, the highest since the Great Depression, and may reach 100% by the end of the year.

Why is inflation in Argentina so high?

According to the publication, inflation in the country by the end of 2022 could reach 100%, several times higher than in other Latin American countries. Experts estimate that during the 33 months of President Fernandez’s cabinet, prices in the country rose by 243.6 percent.

“The government of Argentine President Alberto Fernández has once again rebuked entrepreneurs for chasing excessive profits in a situation where the country’s inflation – the worst since the Great Depression 30 years ago – was 82.2 percent this year by the end of September, according to independent economists,” the publication noted.

According to the famous Argentine sociologist Augustine Salvia, after the elections and the organization of public works in the summer the economy went into a recession, as more and more people began to work without an employment contract. At the same time, the situation at the end of the fourth quarter could be even worse.

Earlier, we reported that OPEC+ extended the deal until 2024 and reduced the oil production quota by 2 million bpd.

The U.S. will not sell strategic reserve oil after the end of Biden’s executive order

The U.S. administration is not considering an option for strategic reserve oil after the departure of President Joe Biden’s executive order. This was stated by White House press secretary Karin Jean-Pierre at a briefing.

“We’re not considering a new sale of strategic reserve oil beyond the one you’re talking about. I have nothing more to say, we’re not going to consider new sales,” Jean-Pierre said.

According to her, the U.S. will continue to fight inflation. However, no action will be taken now with the strategic reserves. Because this could lower oil reserve levels.

In late March, Biden signed an executive order that required the U.S. Energy Department to sell 1 million barrels of oil a day for six months from the strategic reserve for the sake of reducing gasoline prices in the country.

Before that, global oil prices on September 28 began to decline by more than 1% in the morning amid information about a sharp increase in fuel stocks in the United States.

Earlier we reported that French enterprises were obliged to determine their own measures to save energy.

The OPEC+ alliance has agreed to extend the deal on oil production volumes until December 31, 2023. The daily OPEC+ oil production quota for the member countries of the commodity association will be reduced by 2 million barrels, according to a press release from the organization.

“Participating countries have decided to extend the declaration of cooperation until December 31, 2023 and to adjust total production downward by 2 million bpd from the required production levels in August 2022,” the statement said.

The reduction in daily production levels of oil will begin in November 2022. The alliance also stressed the importance of sticking to the new terms of the deal for each member of the cartel.

The new requirements were conditioned by the state of general uncertainty in the world energy market as well as the risks of a recession in the global economy in the light of international sanctions against one of the leaders in oil exports, Russia.

On October 5, the EUobserver reported that the eighth package of the EU’s anti-Russian sanctions will take effect on the sixth of this month. The list of restrictions will include: the introduction of price caps on oil transported by sea, as well as measures against exports of steel and timber industries. The total damage is estimated at up to €7 billion.

Earlier we reported that China earns hundreds of millions of dollars from reselling LNG from the US to European companies.