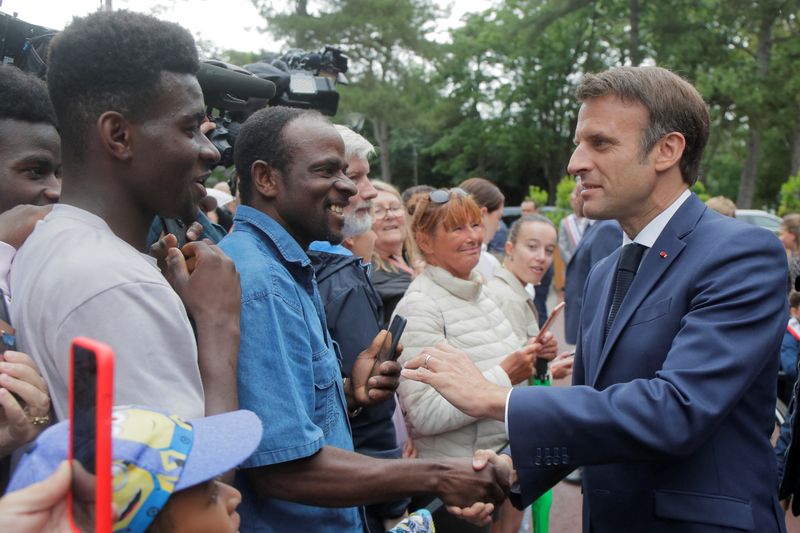 PARIS (Reuters) -Jupiter has lost his thunder. Emmanuel Macron, whose first presidential mandate was marked by a top-down government style he compared to that of the almighty Roman god, will have to learn the art of consensus-building in the second.

Deprived of an absolute majority by voters on Sunday, the French president can no longer count on parliament as a mere rubber-stamping house. Instead, he will be forced to negotiate with demanding allies and new partners with a vendetta.

Projections showed that Macron’s “Ensemble!” coalition bloc had missed an absolute majority by between 40 to 60 lawmakers, a much bigger shortfall than expected and a crushing outcome for the president.

That means he will probably have to seek support from the conservative Les Republicains (LR) party, which will relish its kingmaker role and will want to exact a heavy price from Macron for legislative support — including perhaps a change in prime minister.

“This culture of compromise is one we will have to adopt but we must do so around clear values, ideas and political projects for France,” said Finance Minister Bruno Le Maire, himself a former conservative, in an apparent attempt to reach out to his former political family.

However, in a country which post-war leader Charles de Gaulle famously said was ungovernable given its 246 types of cheese, it will be hard for Macron but also potential partners to learn the northern European art of consensus-building and coalition work.

Senior Les Republicains officials seemed to reject a broad coalition deal on Sunday night and would remain in opposition, but will be “constructive” — hinting at possible deals on a bill-by-bill basis.

“I fear we’ll be more in an Italian-style political situation where it will be hard to govern than in a German situation with its consensus-building,” Christopher Dembik, an analyst at SaxoBank, told Reuters.

“It’s not necessarily a tragedy, in my view. It may be an opportunity to reinvigorate French democracy and return to the real meaning of parliament,” he said.

Macron was frequently criticised during his first mandate for ramming through parliament pro-business reforms that were drafted by his aides at the Elysee palace without consulting lawmakers or outside stakeholders.

Rivals regularly accused the president of being out of touch and arrogant. One government source said that was probably what voters had sought to sanction.

“It’s a message about the lack of grassroots and the arrogance we have sometimes shown,” the source said.

During the campaign, Macron sought to counter this accusation by promising a “new method” of government, offering to create a new body outside parliament that would be filled with figures from civil society and with whom he would consult on future reforms.

In the end, French voters, it seems, were unconvinced.

Macron is likely to face filibustering from both sides of the chamber. The left-wing Nupes alliance, which has turned an already-combative contingent of lawmakers into parliament’s biggest opposition force, will be relentless in its obstruction.

Parliament rules stipulate that an opposition lawmaker must head the powerful finance committee, which can demand access to confidential tax information from the government and can block budget bills temporarily.

That would be a particularly painful way to hold Macron’s feet to the fire.

On the other side of the aisle, Marine Le Pen’s far-right Rassemblement National is also likely to make the most of its newly-acquired right as a parliamentary group of lawmakers to launch parliamentary investigations and challenge bills before the constitutional court, senior RN officials have said.

These investigations can force government ministers or even presidential aides to testify publicly in parliament.

These parties will also replenish their coffers with taxpayer money that is distributed to political parties on the basis of their election results — raising the spectre of strong challenges from them in the next presidential election in 2027.

Macron’s new centre-right partners will find it hard not to back his most conservative-oriented reform plans, such as pushing back the retirement age to 65 or making welfare benefits conditional on training or community work.

Some legislation may be laboriously passed.

But how long Macron accepts to share power remains to be seen. The president has the power to call a snap parliamentary election anytime, and political sources expect a new crack of thunder from Jupiter at some point.

“I expect a dissolution of parliament in a year or so,” a centre-right lawmaker whose party may try to get a deal with Macron’s party told Reuters.

Macron fights to salvage a functioning government, and his reform agenda