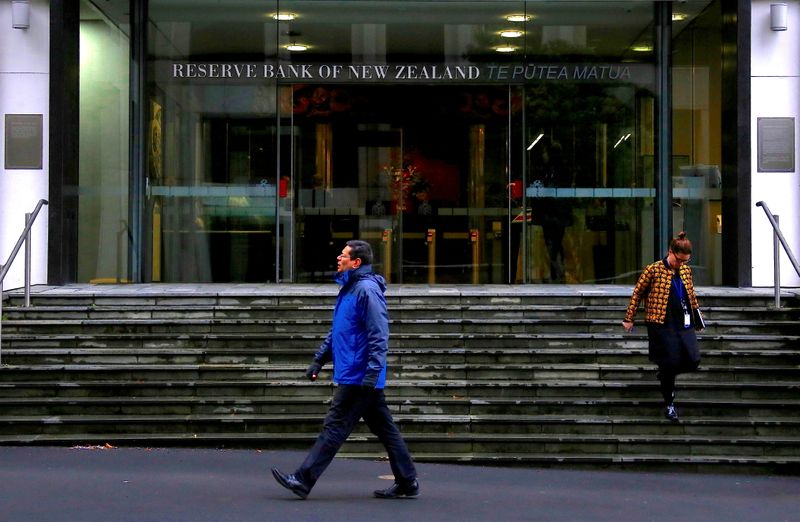 BENGALURU (Reuters) – New Zealand’s central bank will raise rates for the second meeting in a row on Wednesday and continue with its tightening spree next year as it tries to put a lid on rising inflation and cool an overheated housing market, a Reuters poll found.

Large amounts of fiscal and monetary stimulus injected to alleviate pandemic pain have helped the economy recover strongly and pushed inflation to its highest and the jobless rate to its lowest in over a decade.

That has prompted financial markets to price in a series of interest rate hikes through next year that economists have mostly matched in their forecasts.

All but one of 20 economists in a Nov. 15-18 Reuters poll predicted the Reserve Bank of New Zealand (RBNZ) would raise the official cash rate by 25 basis points to 0.75% at its Nov. 24 policy meeting. Markets are fully pricing in a 25 basis point rise too.

The one dissenter expected a 50 basis point hike.

“Unlike other central banks, the RBNZ doesn’t have the luxury of time on its side. They are on a hiking cycle for sure; we have seen one rate rise, we will get another one next week and I think they will raise in every meeting into next year,” said Jarrod Kerr, chief economist at Kiwibank.

“The economic climate is much hotter than the RBNZ envisioned … the decision to lift interest rates is in part due to the excesses seen in the housing market.”

Ben Udy, an economist at Capital Economics, forecasts a 50 basis point hike from the RBNZ on Wednesday, which if realised, would bring rates back to their pre-pandemic level of 1.00%.

“The fact that every measure of underlying inflation which the Bank monitors is now around or above the top end of the Bank’s target, it’s obvious that more monetary tightening is needed,” Udy said.

Medians predict the official cash rate (OCR) reaching 1.75% by the end of next year and 2.0% by end-2023. Still, that is below what it was in 2014 after the RBNZ last delivered four consecutive quarter-point rate hikes.

New Zealand’s annual inflation rose to 4.9% in the third quarter, the fastest pace in over a decade, driven by housing-related costs and other supply constraints.

The RBNZ also warned that more persistent inflationary pressures and any increase in inflation expectations, coupled with weaker growth, could lead to a sudden tightening in financial conditions.

On the other hand, the jobless rate fell to 3.4% in the third quarter, matching its lowest on record from December 2007. That was around the same time when the U.S. economy fell into a deep recession after the housing bubble burst.

New Zealand’s sizzling housing market will also figure prominently in the monetary policy decision of the central bank, which recently said house prices are above their sustainable level and that increases the chance of a correction.

House prices have nearly doubled in the last seven years and are the most unaffordable among OECD nations due to a chronic housing shortage, historically low interest rates and cheap access to capital from the government’s pandemic-driven stimulus spending.

“The labour market is the tightest it has ever been and inflation pressures are intense, but on the other hand the housing market cycle is looking very mature, and there’s the small matter of COVID spreading its way around the country,” said Sharon Zollner, chief economist at ANZ.

“On balance, the case for tighter monetary conditions is clear.”

Dollar takes a breather, edges back from 16-month peak