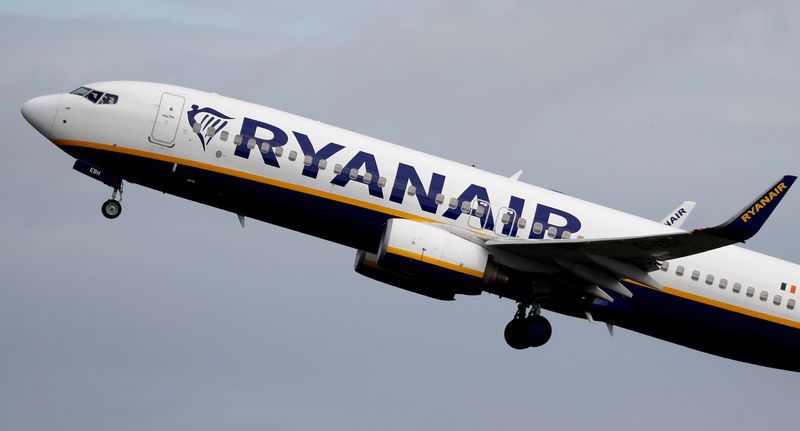 DUBLIN (Reuters) – Ryanair on Monday reported its first quarterly profit since before COVID-19, but downgraded its annual forecast to a loss of up to 200 million euros ($231 million) on plans to sell discounted tickets over the winter and higher fuel costs.

Europe’s largest budget airline, which operated more flights this summer than any European rival, posted a profit of 225 million euros for the three months to the end of September, marking its first quarterly profit since October-December 2019.

But the Dublin-based airline said it expected a loss of between 100 million and 200 million euros for the financial year that ends on March 31.

While that is better than the 815 million euro loss posted in the previous year, it is a downgrade from its July forecast of “somewhere between a small loss and breakeven”.

“There is no doubt that the remainder of the fiscal year will be challenging, the winter will be tough,” Group Chief Executive Michael O’Leary said in a video presentation.

The number of empty seats per plane would shrink from around 20% to under 10% by next summer while yields, or fare levels, will return to pre-COVID levels “if not better”, O’Leary said.

The airline expects to return to profitability in the year ending March 2023, he said.

Ryanair shares briefly dropped more than 4% to 16.2 euros after what Goodbody stockbrokers described as a “slight miss” and a more cautious outlook statement than expected.

Ryanair carried 39.1 million passengers in the six months ended September, more than double the number in the period last year but 54% fewer than the same months in 2019.

Ryanair said it would fly around 10 million passengers per month over the winter and “just over” 100 million in the year to March.

O’Leary, who has said the pandemic offers the best growth opportunities of his three-decade career, reiterated a forecast that Ryanair would fly 225 million passengers a year by 2026.