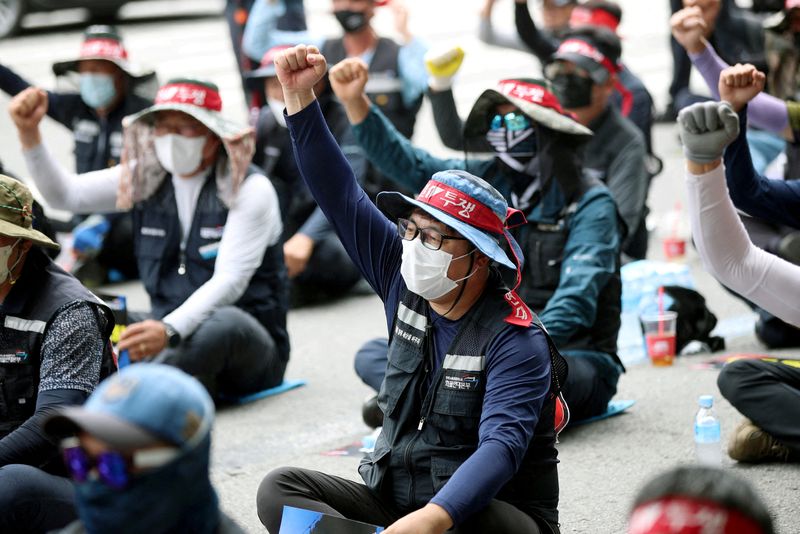 The Cargo Truckers Solidarity Union is weighing several options to press its demands, including stopping coal to generate electricity and shutting down petrochemical complexes by blocking their shipments in and out.

“We are thinking of a complete blockade,” the union leader, Kim Jae-gwang told Reuters, referring to coal shipments to a power plant in Gunsan, North Jeolla Province, that uses trucks for its coal.

“But we hope such a situation doesn’t happen.”

The impact of a blockade of the power plant would be limited in terms of national electricity output, even in the high-demand summer, but it would mark a significant intensification of the truckers’ action.

The strike, in its seventh day, has cost key industrial sectors more than $1.2 billion in lost production and unfilled deliveries, the government estimated on Monday, as the damage spreads deeper through Asia’s fourth-largest economy.

The union is protesting against soaring fuel prices and demanding minimum pay guarantees. Four rounds of negotiations with the government have failed to find a compromise.

Some 6,600 truckers, or about 30% of union members, were striking on Monday, according to a transport ministry estimate.

Kim said his members were for now letting some movements to prevent the shutdown of petrochemical facilities, which would cost a lot of time and money to restart, but the union would “reconsider” that if the government did not show willingness to negotiate.

The strife is a major test for South Korea’s new conservative president, Yoon Suk-yeol, raising the risk of eroding his support, distracting him from his agenda and sowing the seeds of long-term antagonism with powerful unions.

On Monday, Yoon called for ways to reduce the impact of the strike on industry. A transport ministry official said no new meeting with the union was scheduled.

The strike has forced steelmaker POSCO (NYSE:PKX) to shut some plants because of a lack of space to store finished products. Hyundai Motor has cut production for some assembly lines and cement makers have also reduced output.

It was not immediately clear if petrochem firms were also cutting production.

The industry ministry said in its first such calculation that the strike had cost automobile, steel, petrochemical and cement sectors about 1.6 trillion won ($1.2 billion) in lost production and failed deliveries between June 7 and June 12.

There have been as yet no reports of major production disruption at Samsung Electronics (OTC:SSNLF), SK Hynix and other semiconductor firms.

Kim Yang-pang, a researcher at Korea Institute for Industrial Economics & Trade, estimated Samsung (KS:005930) Electronics and SK Hynix and their suppliers had enough supplies of raw materials in stock for at least two weeks.

Samsung declined to comment. Hynix did not immediately respond to a request for comment but sources at semiconductor companies said had inventories of key materials.

The government has urged the truckers to return to work but said it would seek to reflect their demands in legislation. It has also deployed some 100 military vehicles to help companies with shipments.

The truckers are demanding an extension of subsidies, set to expire this year, that guarantee minimum wages as fuel prices rise. The Yoon administration says it is up to parliament to change the legislation.

As supply bottlenecks plague the global economy, any prolonged slowdown in the production and shipment of chips, petrochemicals and autos could add to fears about rising inflation and slowing growth.

South Korea’s inflation is set to hit a 24-year high of 4.8% this year, the Organisation for Economic Cooperation and Development said last week, while it cut its growth forecast to 2.7% from a December projection of 3.0%.