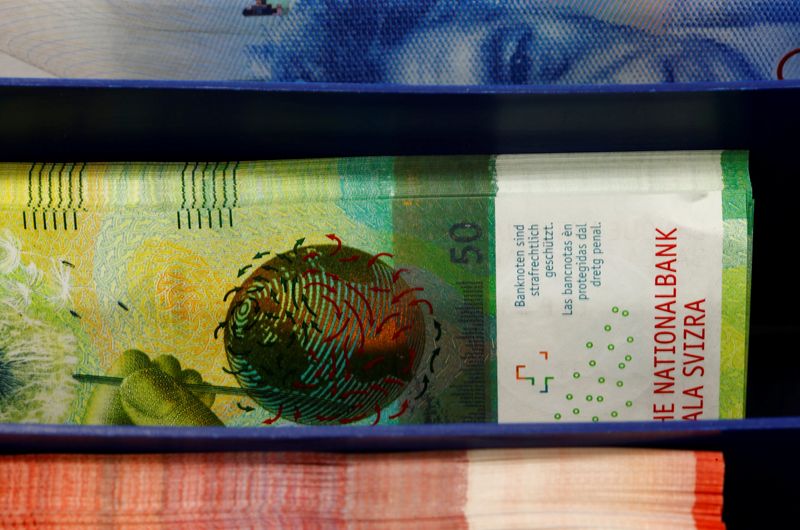 © Reuters. FILE PHOTO: 50-Swiss-franc banknotes (C) lie between others in a box at a Swiss bank in Zurich, Switzerland April 9, 2019. REUTERS/Arnd Wiegmann/File Photo

LONDON (Reuters) – The Swiss franc jumped on Thursday against the euro and the dollar after the Swiss National Bank raised its policy interest rate for the first time in 15 years.

The SNB joined other central banks in tightening monetary policy to fight surging inflation, increasing its policy rate to -0.25% from the -0.75% level it has deployed since 2015.

It was the SNB’s first rate hike since September 2007.

“The SNB move comes as a big shock,” said Jane Foley, head of FX strategy, at Rabobank in London.

“Talk had been building that the SNB could start to move away from their deeply negative position on rates under the cover of the more hawkish ECB, but today’s 50 bps move is still a big surprise.”

Most analysts had expected the SNB to hold rates on Thursday and flag a hike for September, although a couple of banks had predicted a 25 bps move.

The move followed a 75 basis point (bps) rate hike by the U.S. Federal Reserve on Wednesday, while the European Central Bank signalled last week it would raise its rates in July and the Bank of England is expected to raise rates later today.

SNB and the Bank of Japan, which meets on Friday, were the only two major developed world central banks yet to raise interest rates in a tightening cycle that started late last year.

Sterling fell ahead of Thursday’s BoE meeting as global risk sentiment worsened. The central bank is expected to raise borrowing costs for the fifth time since December despite worries about a sharp slowdown in the British economy.

“If we were to see a 50bps hike, not our central case view, we would look to sell into any knee-jerk rally as the macro story remains troublesome,” said Jeremy Stretch, head of G10 FX strategy at CIBC.

Traders were also closely watching several ECB speakers after the central bank promised to control borrowing costs for the euro zone’s periphery countries after an emergency meeting on Wednesday.

Amid worsening market risk sentiment, the safe-haven U.S. dollar rose against a basket of peers, nearing a 20-year high touched before the Fed upped borrowing costs on Wednesday by the most since 1994.