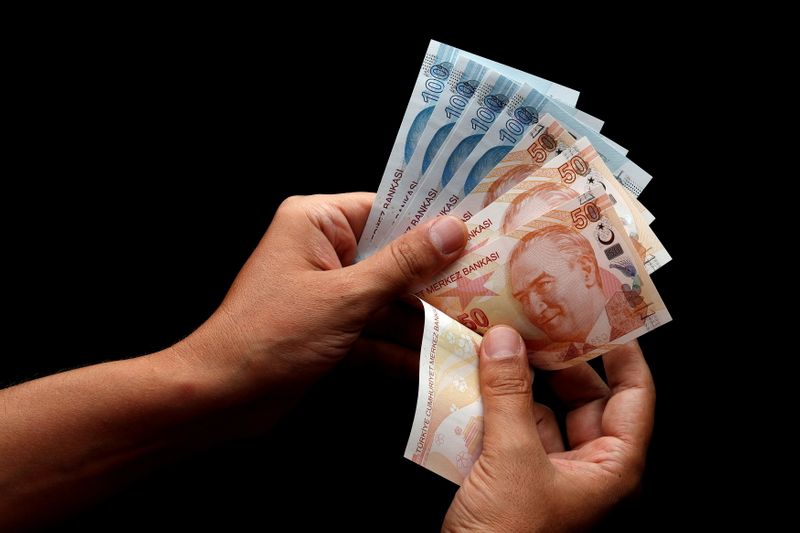 
By Tommy Wilkes and Marc Jones

LONDON (Reuters) – suffered one of its worst days in three years on Thursday after the central bank defied warnings of a full-blown currency meltdown and rocketing inflation, and slashed interest rates by 100 basis points.

The country’s President Tayyip Erdogan takes the unorthodox view that lower rates are the only way to curb inflation. Not only has he seemingly got his way this time, but his central bank chief hinted at another cut next month.

Below are a series of charts explaining what’s behind the lira’s woes.

Turkey, the largest economy in the Middle East and the 20th biggest in the world, has been hit by two sharp contractions in as many years and its currency has shed two-thirds of its value since mid-2018.

The lira enjoyed some respite in 2020 — it rallied more than 20% between November 2020 and February 2021 — after a change of finance minister and central bank governor restored some confidence.

But Erdogan ousted that governor in March and investors say any remaining credibility has been lost as the new chief delivers a series of rate cuts.

The central banks’ reserves have risen this year thanks to an infusion of IMF money, but analysts say they are actually still in negative territory due to various funding arrangements with the country’s local banks.

Turkey’s net FX reserves stood at $28.61 billion as of Nov. 12. That’s up significantly from the sub-$10 billion levels of April.

However, the bank’s outstanding swap transactions stand at $43.44 billion, which means reserves are technically $15 billion in the red.

3. CRISIS IN THE BALANCE

Turkey also runs a current account deficit, though smaller than in previous years. The central bank chief has said addressing the deficit is key to tackling price stability.

Looser monetary policy though in the context of an economy already operating above its pre-COVID trend risks causes imbalances to build and could sow the seeds of another balance of payments crisis, warns Capital Economics.

4. IS ANOTHER CUT COMING?

In 2018 when the lira was in free fall, the central bank yanked up interest rates to 24%, or about seven percentage points above where inflation was at the time, before the currency stabilised.

Turkey’s government and its companies need to refinance a combined $174.5 billion next year, according to ratings firm Fitch.

But Turkey’s real yields — adjusted for inflation — are negative and below peers, making them less appealing for overseas investors.

“We have had this issue (absence of central bank credibility) for a long time, but what we are looking at is the fallout elsewhere – how it effects the ability of the banks and corporates to meet their financing requirements,” one of Fitch’s top sovereign analysts, Paul Gamble, said.

The International Monetary Fund forecasts Turkey’s economy will grow 9% this year as it recovers from the pandemic.

But for households and consumers it’s a different story. With inflation likely to be heading towards 30% thanks to the plummeting their spending power is being eroded fast.

Turks and businesses in the country tend to convert their lira into dollars and euros, especially during times of strife.

It has not moved much of late. Dollarization of the domestic deposit base is hovering above 60%. The real crisis would come if Turks starts pulling their money of the banks en masse.