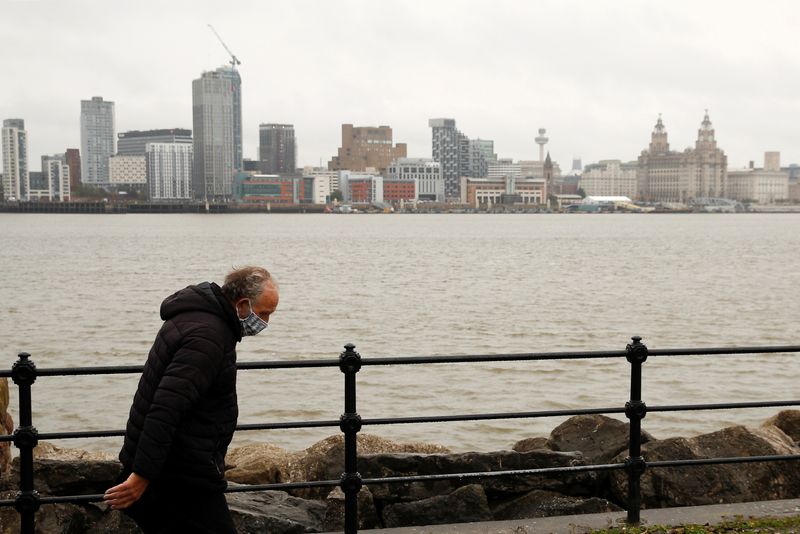 © Reuters. FILE PHOTO: A man wearing a face mask walks along the River Mersey with the Liverpool skyline amid the outbreak of the coronavirus disease (COVID-19) in Seacombe, Britain, October 12, 2020. REUTERS/Phil Noble


LONDON (Reuters) -Britain’s economy unexpectedly shrank in April, official figures showed on Monday, adding to fears of a slowdown three days before the Bank of England announces the scale of its latest interest rate response to the surge in inflation.

It was first time since January last year that all main economic sectors had contributed negatively to monthly GDP.

However, GDP would have grown by 0.1% excluding the impact of a scaling back of the government’s coronavirus test-and-trace and vaccination programmes, the Office for National Statistics said.

“Many respondents reported that increases in the cost of production had affected their business,” the ONS said.

Some economists said before Monday’s data they had expected April’s jump in domestic power tariffs and an increase in taxes paid by workers introduced during the month to impact the monthly GDP data only in May.

Finance minister Rishi Sunak said Britain was not alone in facing the hit from surging inflation and the fallout from Russia’s invasion of Ukraine.

“Countries around the world are seeing slowing growth, and the UK is not immune from these challenges,” he said in a statement.

However, last week the Organisation for Economic Co-operation and Development said British gross domestic product would grow by 3.6% this year before flat-lining at 0.0% next year, the weakest forecast for 2023 among all countries in the Group of 20 with the exception of Russia.

Despite the slowdown, The BoE is expected to raise interest rates for the fifth time since December on Thursday.

It has forecast inflation will exceed 10% in the final quarter of the year, five times its target.

Most investors and economists expect another quarter percentage-point rate hike this week.

Separate trade data published by the ONS showed the impact of sanctions on Russia with exports to the country falling to the lowest monthly value since January 1999, and imports the lowest since March 2004.

Thai rate hikes should not be too late as inflation climbs, central bank chief says