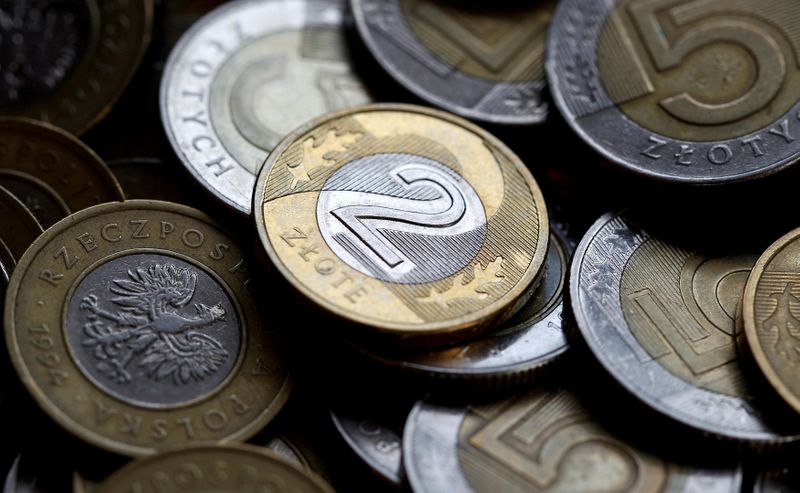 PRAGUE/BUDAPEST (Reuters) – The Polish zloty and Hungarian forint will notch up strong gains against the euro over the next year as most central European currencies return to a path of appreciation, helped by expected rate hikes, a Reuters poll showed on Wednesday.

As inflation hits new highs in central Europe, more policy tightening is expected to lift regional currencies that had shed around 1% in the last month due to a stronger dollar.

“Generally over the next 12 months the zloty should be supported by a tightening of domestic monetary policy,” said Krystian Jaworski, senior economist at Credit Agricole (OTC:) in Warsaw.

“Also the growth prospects should be quite good after this wave of the pandemic finishes.”

The zloty was expected to firm 3.5% from Monday’s closing levels over the next year, to 4.46 versus the euro.

Inflation data on Friday further fuelled Polish rate hike expectations as the CPI soared to an annual rate of 6.8%, and officials and analysts have said it could hit 8%.

The zloty has lagged its regional peers in 2021, with the Polish central bank the last in the region to begin lifting rates, taking a cautious approach until a surprise October hike. It is expected to tighten further at a meeting on Wednesday.

The Hungarian forint is seen firming 3% to 350 per euro in the next year, also supported by rate hikes that the National Bank of Hungary started in June.

“Even though the bank slowed the pace of its rate hikes to 15 basis points, the tightening cycle must have an effect on the forint sooner or later. The small steps add up,” Gergely Suppan, an analyst at Takarekbank, said.

Meanwhile, the Czech crown, the region’s best performer this year, is seen firming 2.3% over the next 12 months as markets price in 125 basis points in hikes for the rest of the year.

In Romania, where political uncertainty continues to cloud attempts to rein in twin deficits, the leu is projected to ease 1.0% in the next year to 4.997 versus the euro.

Thai economy may grow 5-6% next year after weak growth

World economic news now by the morning of Dec. 6

The FT reported on tanker jams in the Turkish straits due to the Russian oil price ceiling, and NATO analysts assessed the Bank of Russia’s foreign currency reserves seized abroad – these and other world economic news now for the morning of Tuesday, December 6, read more.

Economic news around the world

A tanker jam has formed near the Turkish Bosporus and Dardanelles straits, through which ships carrying Crude Oil from Russian Black Sea ports pass. Turkish authorities demanded insurers fully insure ships passing through the straits, after the G7 countries, the European Union and Australia imposed a ceiling on oil prices from Russia, said the Financial Times.

The newspaper’s sources claimed that ships with Western insurance coverage were delayed, while ships with documents from Russian insurers were allowed through Turkish waters.

India is in discussions with Apple (NASDAQ:AAPL) to locate iPad production in the country and is exploring options for shipping components for them from China, CNBC reported, citing two sources close to the Indian government. Plans have no specifics so far, but if negotiations with Indian authorities are successful, Apple will expand its presence in the country.

A federal court in Australia has asked UC Rusal (MCX:RUAL) for documents on alumina supplies to Queensland Alumina (QAL), the aluminum company’s ties with the Russian government and entrepreneurs under sanctions, Kommersant reported, citing court data. The documents were asked by the court on the claim of Alumina and Bauxite Company, an Australian “subsidiary” of UC Rusal: it owned 20% of QAL; the share went to Rio Tinto (LON:RIO), which had the remaining 80% of the company.

Earlier we reported that the average house prices in the UK fell by 1.4% in November.