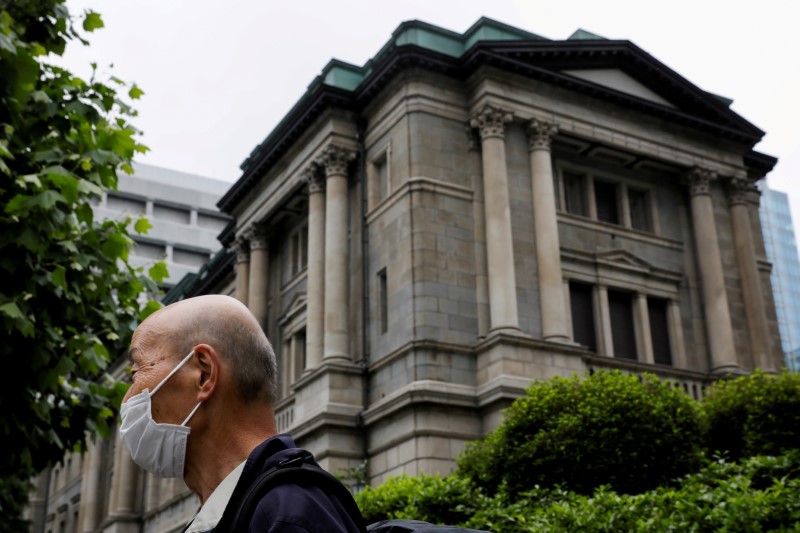 © Reuters. FILE PHOTO: A man wearing a protective mask stands in front of the headquarters of the Bank of Japan amid the coronavirus disease (COVID-19) outbreak in Tokyo, Japan, May 22, 2020.REUTERS/Kim Kyung-Hoon/File Photo

TOKYO (Reuters) – Japan’s new political leadership is calling on the country’s financial bureaucrats to ramp up efforts toward issuing a digital currency, pointing to China’s far quicker progress as a potential challenge to the global economic order.

The government has increased staff looking into legal and technical aspects of issuing a central bank digital currency (CBDC), which are digital forms of existing currencies.

While the political attention has yet to translate into any other direct investment, it is also likely to keep the Bank of Japan (BOJ) under pressure to shift away from its cautious, baby-step approach toward issuing a digital yen, analysts say.

“We must think about what could happen to Japan’s national security if other countries move ahead on CBDC,” said Takayuki Kobayashi, a minister overseeing economic security – a new role created under Prime Minister Fumio Kishida’s administration.

“Japan must speed things up so it’s ready to issue a digital yen any time,” he said.

A global front-runner, China has already run tests in major cities for a possible launch of a digital yuan next year. Japan, along with other G7 advanced nations, have moved much slower.

The BOJ only started the first phase of its experiment in April, and says it has no immediate plans to issue a digital yen. Pilot programmes, if any, won’t take place until 2023 at the earliest.

That lukewarm stance may be put to test as Kishida has made economic security a policy priority, and framed questions around CBDC beyond finance into one of national security.

While G7 central banks generally agree on the need to counter China on issues around privacy, the case is particularly strong for Japan as lawmakers worry about the growing economic might of its assertive neighbour.

Some influential ruling party lawmakers see China’s advances on CBDC as a potential threat to the dollar’s status as a global reserve currency, and the financial dominance of Washington – Japan’s biggest ally.

A close aide to Kishida told Reuters Japan must “work closely with the United States to counter any attempt that threatens the dollar’s reserve-currency status,” adding the BOJ was coordinating with the finance ministry to ensure speedy progress for issuing a digital yen.

Opposition parties have also called in their election campaign platforms for speeding up CBDC plans.

BOJ officials say China’s plan won’t directly affect the timeframe for their CBDC experiments as the key purpose of issuing a digital yen is to provide convenient, efficient payment and settlement means to the public.

What could affect the BOJ more than China’s plan would be how quickly its European and U.S. counterparts announce plans for issuing CBDCs, say sources familiar with its thinking.

Debate over issuing a digital yen may intensify next year as Kishida’s administration lays out details of its economic security plans, and as China is seen promoting its digital yuan at the Beijing Winter Olympic Games in February.

“It’s clear Kishida’s administration and his ruling party are keen on issuing a digital yen,” said former BOJ board member Takahide Kiuchi, who is currently an economist at Japan’s Nomura Research Institute.

“If China launches a digital yuan next year and Europe’s central bank announces plans to issue a digital euro, that will have a huge impact on Japan and pile pressure on the BOJ.”