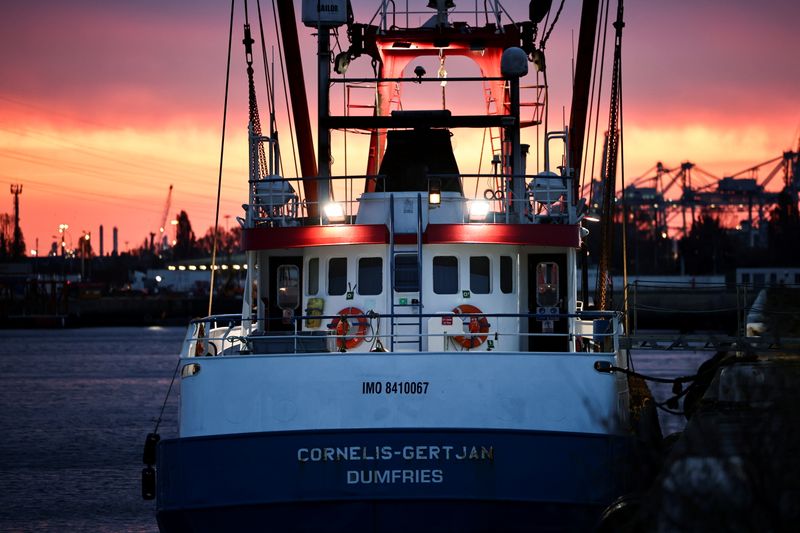 © Reuters. FILE PHOTO: A British trawler Cornelis Gert Jan is seen moored in the port of Le Havre, after France seized on Thursday a British trawler fishing in its territorial waters without a licence, in Le Havre, France, October 29, 2021. REUTERS/Sarah Meyssonnier


By Guy Faulconbridge and Andrew MacAskill

LONDON (Reuters) – A British scallop dredger seized by France is still being held at the port of Le Havre, the owner of the ship said on Tuesday, after a British minister said the vessel had been released by French authorities.

Post-Brexit bickering over fish culminated last Wednesday in the French seizure of the British dredger, the Cornelis Gert Jan, in French waters near Le Havre.

“As far as we are aware, the vessel remains held at the port of Le Havre at least until the hearing tomorrow,” Andrew Brown, a director of Macduff Shellfish which owns the Cornelis Gert Jan, told Reuters.

Earlier, British Environment Secretary George Eustice said he understood the vessel had been freed by France.

Spokesmen for the environment ministry did not return calls and did not answer the phone. Ship tracking data shows the vessel in Le Havre.

French President Emmanuel Macron said on Monday he was postponing trade sanctions on Britain so that negotiators from both sides could work on new proposals to defuse their dispute over post-Brexit fishing rights.

“It’s a decision by the French to step back from the threats they made,” Eustice told Sky. “We welcome that.”