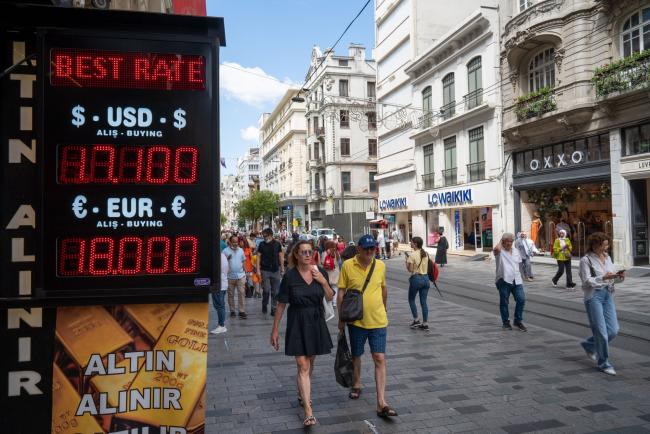 © Bloomberg. An electronic board displays exchange rates information at a currency exchange bureau in Istanbul, Turkey, on Friday, June 24, 2022. Tourism arrivals in May surged 308% year-on-year, boosting hopes that a rebound in the sector can support the weakening Lira. Photographer: Erhan Demirtas/Bloomberg


(Bloomberg) — Sign up for our Middle East newsletter and follow us @middleeast for news on the region.

The Turkish currency retreated on Tuesday as companies continued to buy dollars for a second day after a new rule imposed restrictions on extending lira loans to foreign-exchange-rich corporates.

The lira fell as much as 0.5% to 16.6376 per dollar after rising more than 2% on Monday. Corporates purchased dollars even as state lenders moved to defend the local currency, according to three traders who asked not to be identified because they’re not authorized to speak publicly.

State lenders sold more than $1 billion in two days to support the currency, they said. One trader said the net impact was limited as some firms’ dollar sales were offset by others.

The country’s banking regulator restricted commercial lira loans to corporate borrowers if they held more than 15 million liras ($902,000) in foreign currencies and if such an amount exceeded 10% of total assets or annual sales. The move is one of the most forceful attempts to date to support the lira.

Instead of raising interest rates to contain soaring inflation and the voracious local appetite for dollars, regulators have put in place a series of other curbs to support the currency since 2018. The central bank has held its key policy rate at 14% over the past six months while consumer prices rose at the fastest pace since 1998. Turkey’s interest rates are now the world’s most negative when inflation is factored in.

The Borsa Istanbul 100 Index, Turkey’s equity benchmark, climbed 0.6% as of 1 p.m. in Istanbul. The cost of insuring the nation’s bonds against default for five years rose 13 basis points to 784.

State banks don’t comment on their interventions in the foreign-exchange market. A former central-bank governor said in 2020 that government-owned lenders carry out transactions in line with regulatory limits and may continue to be active in the currency market.

The euro is at parity with the dollar. Why it happened and what it means for the economy

Dollar Up Despite Concerns Over Economic Recession