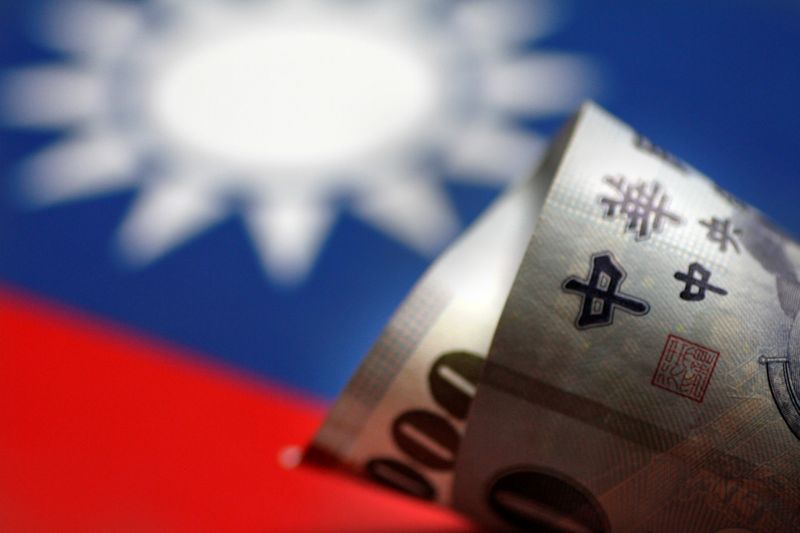 © Reuters. A Taiwan dollar note is seen in this illustration photo May 31, 2017. REUTERS/Thomas White/Illustration

The benchmark rate is currently at 1.125%, the lowest on record, where it has sat since March of last year.

However minutes of the last board meeting in September showed that some members were worried about inflation and had recommended considering a rate rise.

Taking lawmaker questions in parliament, Yang expressed concern that any rate rise now would push up the Taiwan dollar.

“This is an area of worry for us,” he said. “So we need to watch the rate adjustment situation in other countries.”

However, the global trend for next year will to tighten policy, a direction Taiwan will “definitely” follow, Yang added.

The Taiwan dollar’s strength has vexed the government, not only because it makes exports crucial for economic growth more expensive but also as it raises the risk of being labelled a currency manipulator by the United States.

Taiwan was last formally labelled a currency manipulator by the United States in December 1992. It was put back on the monitoring list in 2020.

The central bank holds its next quarterly rate-setting meeting in mid-December.

Analysts say any rate rise would likely not come until the middle of next year, and only after the U.S. Federal Reserve has raised rates.

Australian regulator says crypto investors ‘on their own’ for now

Eurozone inflation rate rose 10% now. Inflation has slowed down from 10.6% in October, when the rate was at its highest since the start of calculations. Analysts polled by Trading Economics had expected inflation to slow to 10.4 percent.

Consumer prices declined by 0.1% compared to the previous month. Consumer prices excluding volatile factors such as energy, food and alcohol (CPI Core Index tracked by the ECB) rose 5% year-on-year in October after rising the same amount in October.

Energy prices slowed to 34.9% in November after rising 41.5% in October. Manufactured goods prices rose 6.1%, the same as a month earlier. The U.S. is about the same, putting pressure on stock markets and even Apple stock prices today.

Earlier we reported that the dollar is getting cheaper against major currencies.

Dollar is getting weaker against major currencies

The dollar is getting weaker against major currencies in trading Thursday morning after U.S. Federal Reserve (Fed) Chairman Jerome Powell spoke the day before.

During a speech at the Brookings Institution on Wednesday, Powell reiterated that the Fed could slow the rise in the benchmark rate as early as December. “The time to moderate the pace of rate hikes may come as early as the next meeting,” Powell said.

The Fed chair, meanwhile, tried to balance those words with “hawkish” signals. Market Watch notes. He said that the U.S. Central Bank will have to raise the rate higher than could be expected a few months ago. Also, Powell made it clear that the issue of rate cuts is irrelevant at the moment. Against this background, the stock market and Tesla stock prices today in particular rose.

Another Fed official, Board of Governors member Lisa Cook, is confident that the regulator needs to keep raising the rate because inflation is still too high. “We’ve started to get more favorable inflation data. But I would be cautious about drawing big conclusions on just one month’s worth of data,” Cook said during a speech at the Detroit Economic Club.

The ICE-calculated index showing the dynamics of the US dollar against six currencies (euro, Swiss franc, yen, Canadian dollar, pound sterling and Swedish krona) is down 0.4%, while the broader WSJ Dollar Index is losing 0.6%.

Earlier we reported that unemployment in the Eurozone fell to 6.5% in October and in the EU to 6.0%.

The unemployment rate in the eurozone decreased to 6.5% in October, to 6.0% in the EU

In October, there were 2.872 million unemployed young people (under 25 years of age) in the EU, of which 2.326 million were in the euro area. The youth unemployment rate in the EU and the euro area was 15.1% compared to 15.2% (EU) and 15% compared to 15.2% a month earlier (euro area). In the U.S., the situation is similar, which puts pressure on stock markets and in particular on NVIDIA stock prices today.

Earlier, we reported that the Chinese stock market closed in the negative amid protests in China.