(Reuters) -Dallas police on Thursday searched for a gunman who entered a hair salon in the city’s Koreatown section and opened fire, wounding three women in an incident that echoed last year’s Atlanta-area shooting rampage that targeted people of Asian descent.

The victims – the owner of the Hair World salon, a stylist who worked there and a customer – were all Korean women, according to reports by ABC affiliate WFAA. They were taken to a local hospital with non-life-threatening wounds.

The unidentified suspect was dressed in black when he walked into the salon and began shooting on Wednesday afternoon, the Dallas Police Department said. The shooter then drove away in a maroon minivan.

While authorities said they did not know the motive behind the gunfire, the incident recalled the shooting of eight people in Atlanta-area massage spas, six of whom were Asian or Asian-American women. Police said they had no evidence that the shooting was a hate crime but stressed the investigation was in its early stages.

Those attacks heightened fears in Asian communities of violence inspired by anti-immigrant or anti-Asian sentiment, which has escalated in recent years, in part because of the perception that China was responsible for triggering the worldwide pandemic.

The statement from the Dallas police did not say how many shots were fired by the gunman.

Law enforcement circulated images from the scene that showed a person wearing black and carrying a large rifle while appearing to run out of a parking lot.

A police spokesperson said there was no update on Thursday on the condition of the three women who were shot.

The Korean-American community in the Dallas area ranks among the largest in the United States, according to the Pew Research Center, and Koreatown is the historic hub of the area’s Asian and Asian-American residents. 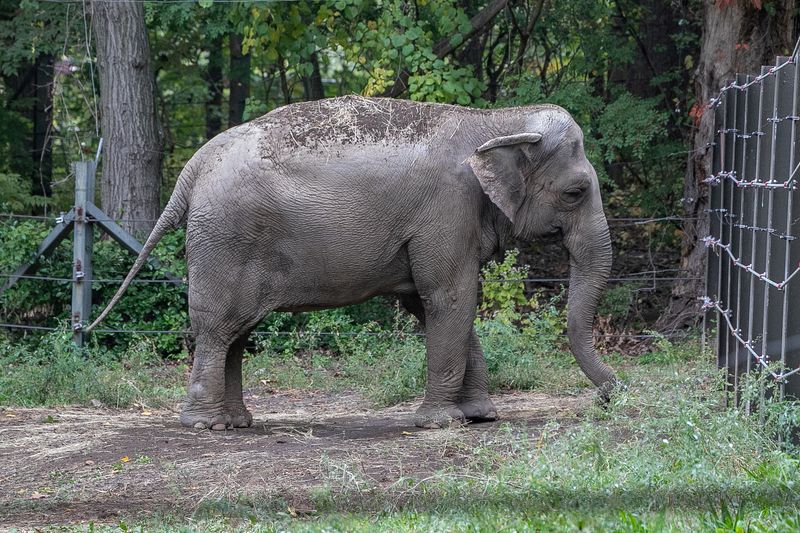 NEW YORK (Reuters) -Would granting a female elephant some of the same rights as humans mean people could no longer keep dogs as pets?

That was among the questions that judges on New York state’s top court during arguments in Albany on Wednesday asked a lawyer for an animal rights group that is pushing to free Happy the elephant from the Bronx Zoo.

The 51-year-old Asian elephant has called the venerable New York City zoo home since 1977. Happy has been kept apart from other elephants in a one-acre (0.4-hectare) enclosure at the zoo since around 2006, court records show.

Four years ago, the Florida-based Nonhuman Rights Project began asking New York courts to release Happy to one of two elephant sanctuaries in the United States, saying the animal was being illegally imprisoned.

The group has said that Happy was entitled to habeas corpus, a legal process in which illegally detained people or someone acting on their behalf may inquire about the reason they are being held.

New York’s habeas corpus law does not define “person,” and the group said Happy should be recognized as one. The Court of Appeals session was meant to address that question, after two lower courts sided with the Bronx Zoo, which maintains that Happy is well cared for.

“Does that mean I couldn’t keep a dog?” Associate Judge Jenny Rivera asked.

Monica Miller, a lawyer for the group, replied that there is not as much evidence about dogs’ cognitive abilities as there is for elephants.

According to a 2006 study, Happy passed a “mirror self-recognition” test, considered an indicator of self-awareness. The animal rights group argues that is among the many cognitive abilities Happy shares with humans.

“Happy is autonomous by scientific proof,” Miller told the seven judges. “Elephants high-five each other after they drive off an enemy. They do a halftime football kind of dance. They’re just a really special, unique species.”

The Bronx Zoo, run by the Wildlife Conservation Society, has said the group is exploiting Happy without concern for the animal’s wellbeing. The judges quizzed Ken Manning, a lawyer for the zoo, on whether habeas corpus would apply to zoo animals if there was evidence they were being kept in unsuitable conditions.

Manning said that it might, but that zoo animals were “highly regulated” and Happy’s conditions complied with the law.

Happy’s longtime companion, Grumpy, was attacked by two other elephants in the early 2000s. Grumpy never recovered from the injuries and was euthanized. Another of Happy’s companions, Sammie, later died.

The zoo’s other elephant, Patty, lives in an adjacent enclosure separated from Happy by a fence. The zoo has said the two interact with each other.

The Court of Appeals did not specify when it will rule. 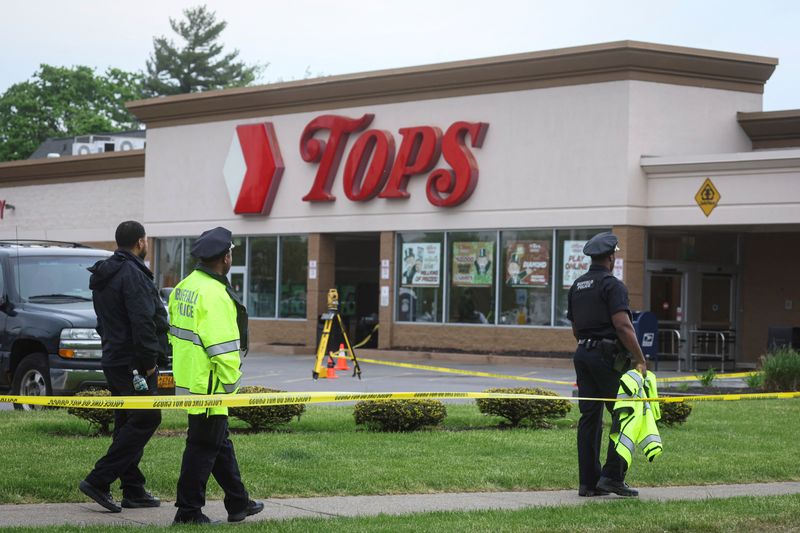 © Reuters. FILE PHOTO: Members of the Buffalo Police department work at the scene of a shooting at a Tops supermarket in Buffalo, New York, U.S. May 16, 2022. REUTERS/Brendan McDermid

James said in a Tweet her office will investigate Twitch, 4chan, 8chan and Discord along with other platforms the shooter used to amplify the attack.

Illegally jailed at the Bronx Zoo? Court to weigh Happy the Elephant’s rights

(Reuters) – Should a female elephant have some of the same legal rights as humans?

That is the question New York state’s top court will consider on Wednesday, the latest development in a years-long push by an animal rights group to free Happy the Elephant from the Bronx Zoo.

The 51-year-old Asian elephant has called the world-famous zoo home since 1977.

But four years ago, the Nonhuman Rights Project began asking New York courts to release Happy to one of two elephant sanctuaries in the United States, saying she was being illegally imprisoned.

The group said Happy was entitled to habeas corpus, a legal process in which illegally detained people or someone acting on their behalf may inquire about the reason they are being held.

New York law does not define “person,” and the group said Happy should be recognized as one.

“Elephants are autonomous beings who possess complex cognitive abilities,” the group wrote in a 2018 petition. “Happy’s interest in exercising that autonomy and bodily liberty is as fundamental to her as it is to us.”

Happy has been kept alone in a one-acre (0.4-hectare)enclosure at the zoo since around 2006, court records show. Elephants are gregarious and family-oriented animals with complex social lives.

Her longtime companion, Grumpy, was attacked by two other elephants earlier that decade. He never recovered from his injuries and was euthanized. Another of Happy’s companions, Sammie, later died.

The Bronx Zoo, run by the Wildlife Conservation Society, says Happy is well cared for, and moving her to a sanctuary would not serve her interests.

Jim Breheny, the zoo’s director, has said the push to grant habeas corpus rights to animals “demeans all the people who have sought such relief.”

A New York trial court in February 2020 dismissed the original petition, calling Happy an “intelligent, autonomous being” who “may be entitled to liberty,” but not legally a person. An appeals court later upheld that ruling.

The hearing in front of the Albany-based Court of Appeals, a seven-member panel which generally focuses on issues of law rather than individual factual disputes, is scheduled for 2 p.m.(1800 GMT).