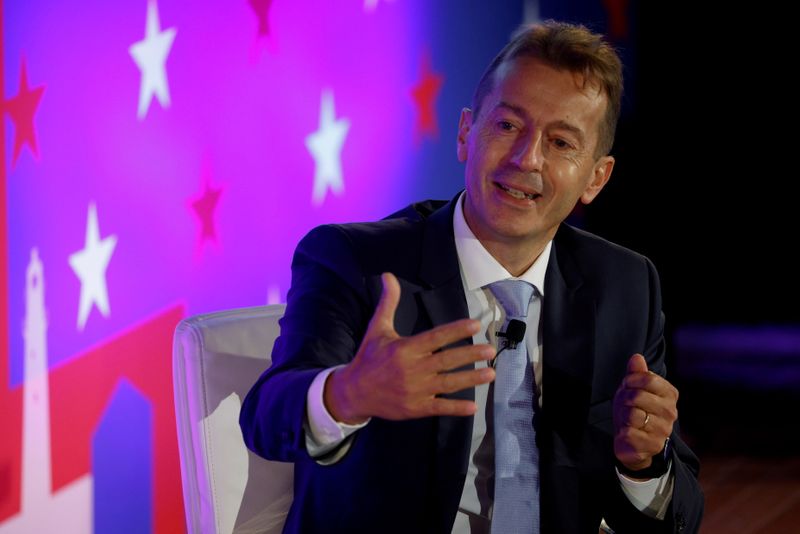 By Tim Hepher and Alexander Cornwell

DUBAI (Reuters) – A slew of plane orders at this week’s Dubai Airshow has added weight to Airbus’ hopes of raising output, but the jetmaker is not yet ready to pull the trigger, its top executive said.

Airbus SE (OTC:) bagged 265 firm orders at the Middle East event, closing a gap with Boeing (NYSE:) which had been leading this year as sales of its 737 MAX rebound from a safety crisis.

CEO Guillaume Faury said Airbus had definitively agreed to increase production to 65 single-aisle jets a month by summer 2023, from a planned average of 45 this quarter.

Some suppliers have criticised the plans, worried the pandemic recovery will remain patchy.

“We are in the phase of assessing demand,” Faury told Reuters in an interview this week.

“What happened (in Dubai) is important, because together with other prospects or deals to come, it gives substance and … evidence that the demand we see for rate 70, 75 will be sustained for many years.”

That “inside-out” view of demand – based on orders Airbus is receiving and its own assumptions based on talks with airlines – matches the “outside-in” or top-down picture provided by new Airbus market forecasts published at the show, he said.

The forecasts cover 20 years and straddle categories, so cannot easily be used to gauge near-term output of a specific model. But Faury said the latest report was consistent with demand for “maybe 70, 75” A320-family jets a month this decade.

“So if those simulation tools and those sensors continue to be as robust as they have demonstrated in the past, we think 70, 75 is reasonable, but we’re not yet there,” Faury said.

Industry sources say Airbus intends to take a decision by the middle of next year to leave time for suppliers to react.

Faury said he had received encouraging signals during recent talks with French and German supplier groups.

Privately, some suppliers are less optimistic. “I think most still believe it will be bumpy,” a senior industry source said.

Airbus deliveries have flattened in the past three months, in part due to snags in the supply chain.

Faury said the overall burden on the supply chain had eased, however, because of a drop in demand for wide-body jets.

He declined to be drawn on a recent row with engine makers who oppose plans to raise monthly A320-family output beyond 65 in order to leave space for repair revenues on older planes that might otherwise be pushed into early retirement.

Faury said he respected their concerns, as well as those of lessors, and any decisions would be made “as a community”.

Airbus appears worried disputes over output plans will deter suppliers from making investments needed to reach the first step of 65 a month, roughly where output was pre-pandemic.

“We are going to 65: that is decided … We are executing this. But we have not decided anything beyond,” Faury said.

Singapore, Airbus to study hydrogen use in aviation

Breaking up is not for us, Bayer CEO says