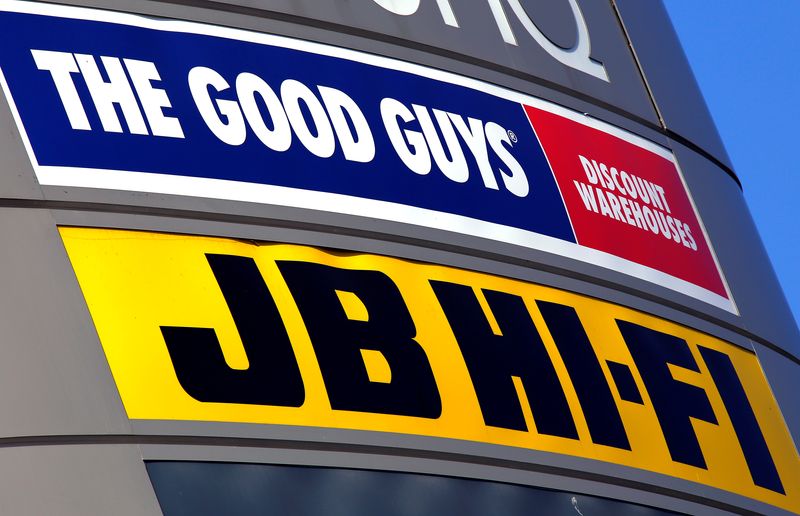 © Reuters. FILE PHOTO: The logos of Australian electronic goods retailers JB Hi-Fi and the privately-held 100-store rival The Good Guys are displayed at a shopping center in Sydney, Australia, May 19, 2016. REUTERS/David Gray

SYDNEY (Reuters) -Australia’s second-biggest appliances chain said on Tuesday it was pausing a trial of facial recognition technology in stores after a consumer group referred it to the privacy regulator for possible enforcement action.

Use of the technology by The Good Guys, owned by JB Hi-Fi Ltd, and two other retail chains was “unreasonably intrusive” and potentially in breach of privacy laws, the consumer group CHOICE told the Office of the Australian Information Commissioner (OAIC) in a complaint published on Monday.

The Good Guys said it would “pause the trial of the upgraded security system with the optional facial recognition technology being conducted in two of its Melbourne stores”.

The company took confidentiality of personal information seriously and was confident it had complied with relevant laws, but decided “to pause the trial at this time pending any clarification from the OAIC regarding the use of this technology”, it added.

The decision by The Good Guys to pause the trial leaves the two other chains named in the CHOICE complaint, Bunnings, which is Australia’s biggest home improvement chain, and the domestic version of big box retailer Kmart, both owned by Wesfarmers Ltd, in the sights of the regulator, which has powers to fine companies that breach privacy law.

“This is an important step in the right direction for The Good Guys, and a decision we know reflects community expectations,” CHOICE policy adviser Amy Pereira said in a statement.

“Bunnings and Kmart are lagging behind when it comes to any kind of commitment to stop the unethical and unnecessary use of facial recognition technology in their stores.”

A Kmart spokesperson said the company was giving the technology a trial “in a small number of stores for the limited purposes of safety and loss prevention” and complied with the law.

Bunnings was not immediately available for comment on the decision by The Good Guys but said previously that it only used the technology for security after an increase in the number of “challenging interactions” faced by its team. It accused CHOICE of an “inaccurate characterisation”.

The OAIC has said it is reviewing the complaint.

It also ordered U.S. software developer Clearview AI, which collects images from social media websites to build profiles of people, to destroy data and stop the practice in Australia.