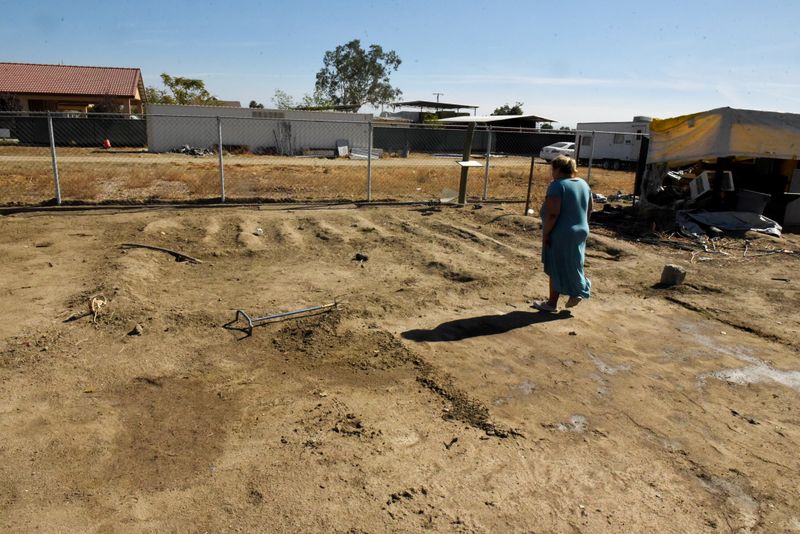 © Reuters. Tiffany Copley, 40, looks at her garden that died last summer during the period when the water pump for the community went dry in Teviston, California, U.S., October 22, 2021. Picture taken on October 22, 2021. REUTERS/Stephanie Keith

TEVISTON, Calif. (Reuters) – The San Joaquin Valley farm town of Teviston has two wells. One went dry and the other is contaminated.

The one functioning well failed just at the start of summer, depriving the hot and dusty hamlet of running water for weeks. With temperatures routinely soaring above 90 degrees Fahrenheit (32 degrees Celsius), farm workers bathed with buckets after laboring in the nearby vineyards and almond orchards.

Even as officials restored a modicum of pressure with trucked-in water, and after the well was repaired, the hardships have endured. Teviston’s 400 to 700 people – figures fluctuate with the agricultural season – have received bottled drinking water since the well failed in June.

But for years, probably decades, the water coming from Teviston taps has been laced with the carcinogen 1,2,3-Trichloropropane, or 1,2,3-TCP, the legacy of pesticides.

The Western U.S. drought, the most severe in 125 years of record-keeping, is exacting a further toll on communities throughout the San Joaquin Valley, where people living on the edge of farmland gather many of the crops but little of the largesse from California’s $50 billion agricultural industry.

For Esperanza Guerrero, 35, a Mexican immigrant and homemaker whose husband works at a dairy farm, the poor water quality poses additional dangers for her 16-year-old daughter, who can drink only purified water because of a gastrointestinal ailment.

“It’s very stressful as a mother to know that if for any reason she should wash a piece of fruit (with tap water) and eat it, she’s going down,” Guerrero said while picking up bottled water from the community depot.

Teviston, devoid of any retail or commercial business, won a $3 million settlement in June from pesticide producers Dow Chemical Company and Shell (LON:) Oil Company and distributors that will pay for a water treatment plant.

Dow declined to comment on Teviston, but said there was “no merit” to allegations in similar lawsuits brought by other local jurisdictions in the San Joaquin Valley.

“The plaintiffs’ claims in these cases are based on a California water quality standard that went into effect in 2018, several decades after the product formulations in question were discontinued. To the extent TCP was present in past product formulations, it would have been at levels so low as to pose no environmental risk,” the company said in a statement.

The settlement will help Teviston resolve the dilemma of having to choose between safe or affordable water, said Todd Robins, an attorney with San Francisco-based Robins Borghei LLP who has represented other towns like Teviston in similar lawsuits.

The arid, forbidding land of the San Joaquin Valley has been transformed into one of the most fertile plains in the world by farmers, politicians and engineers who changed the course of mighty rivers and brought water hundreds of miles to a valley so broad and flat that in most directions the fields meet sky.

The drought has made both surface and ground water scarce.

The U.S. Bureau of Reclamation, which operates canals moving surface water from Northern California further south, has cut allotments to farmers this year: first to a mere 5% of normal, then down to zero.

That increased demand on the aquifers. Growers who operate their own wells are lowering the water table for neighboring towns like Teviston that depend on well water.

Outside the valley, many environmentalists criticize growers. The people of Teviston don’t paint them as the enemy.

“We need the farms. Without the farms, we don’t have any work,” said Frank Galaviz, a director on the town council who has emerged as Teviston’s leading water advocate.

Historically, the farms have faced another nemesis besides drought.

Beneath the ground, tiny worms called nematodes infest roots. For decades, through the 1980s, growers injected their soil with the since-discontinued pesticides Telone, made by Dow, and D-D, made by Shell, according to Robins, who has pieced together the history of 1,2,3-TCP contamination through about 70 lawsuits against both companies.

By the 1990s health officials established that TCP was carcinogenic and would linger in the water table for a lifetime unless removed by filtration. California’s TCP problem is concentrated in the San Joaquin Valley, state data show.

Telone and D-D were essentially a byproduct of other chemical processes that would have been disposed of were it not found to be an effective pesticide, enabling the companies to offload the byproduct by selling it to farmers, Robins said.

While Teviston awaits a treatment plant, its TCP levels remain above safe levels. In May, testing showed the TCP level was nearly three times the maximum acceptable level, and in March it was more than seven times the limit, according to the state’s Safe Drinking Water Information System. In September, Teviston showed a negligible amount, an outlier that experts said could be skewed by the new well or the extreme drought.

Teviston’s marginalization dates back nearly a century, when Black workers arrived to work white-owned cotton farms. While the farmers had sought the Black workers, the workers were unwelcome in white towns, and they formed a tent city that became Teviston. Over the years the workforce became immigrant Mexican, another politically disadvantaged class, and white family farms were supplanted by corporations operating ever larger tracts of factory farms.

Dorris Brooks, an African American woman who lives at the end of Teviston’s water line, said past efforts to improve well water have only resulted in temporary relief.

“You can see there’s actually sludge that comes out of the tap,” Brooks said.

Brooks, who moved to Teviston as an adult 43 years ago, questioned whether the settlement was just.

“That company got away with for messing up the water and the people’s lives,” Brooks said. “There’s sick people here.”

California farm town lurches from no water to polluted water