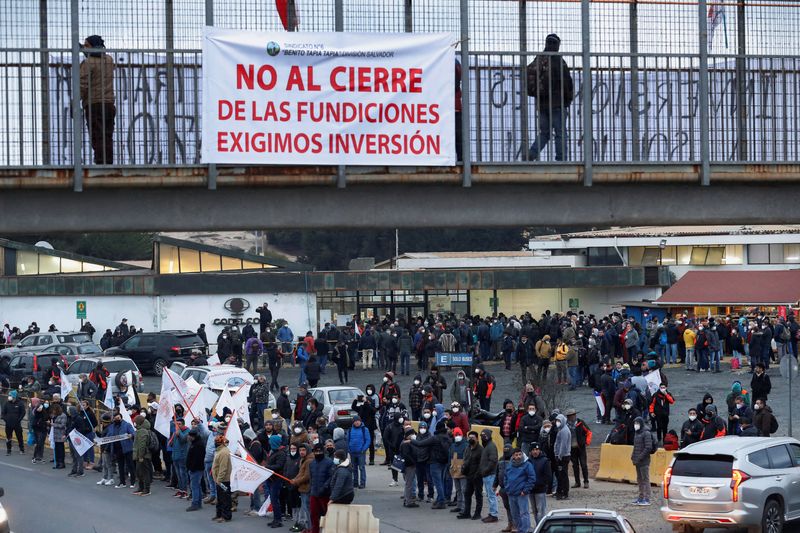 © Reuters. A view shows a banner reading,”No to the closure of the smelters, we demand investment” as workers of Codelco’s Ventanas copper smelter take part in a rally in support of their job positions, after authorities declared an environmental emergency in the re

SANTIAGO (Reuters) – Workers at Chilean state-owned Codelco, the world’s largest copper producer, maintained the threat of a strike on Wednesday if a solution was not reached on investments required by a troubled smelter.

While workers said on Tuesday they would wait for an announcement during a congressional session on Wednesday to act, union members did not set a specific date after the session ended without concrete solutions.

During the session, Mining Minister Marcela Hernando said that the investment studies necessary to improve the unit’s performance have already been carried out, but that the decisions rest with the mining company’s board.

“We have announced very responsibly through the networks, through the press, and we have said it clearly: If the situation is not resolved, we are going to start a strike and please, I do not want them to see it as a threat because it is not a threat,” Amado Pantoja, head of the Federation of Copper Workers (FTC), said during the session.

“We all know, those of us who have been leaders, that strikes are not announced, strikes are made, but what we want to tell you is that the most important company in Chile is at risk.”

Pantoja said that Ventanas, the area in central Chile where the smelter is located, needs $53 million capsules that retain gases and would allow operations to continue while being environmentally compliant.

Codelco has denied that its operations are linked to the contamination incidents.