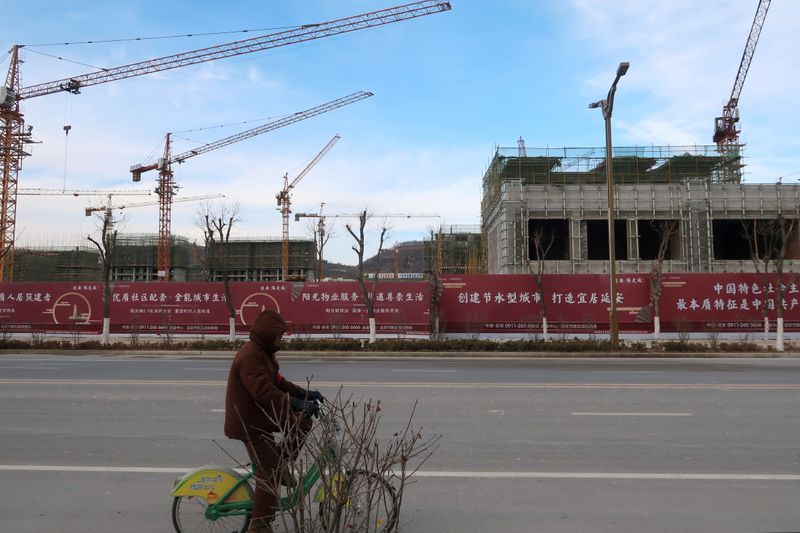 SHANGHAI (Reuters) -Chinese developer Yango Group offered on Monday to exchange some of its U.S. dollar bonds for new notes personally guaranteed by its chairman as it struggles to free up cash and avoid defaulting on upcoming debt payments.

Yango’s liquidity crunch comes against the backdrop of a crisis at China Evergrande Group, which has stoked concern among investors globally about the country’s deeply indebted, $5 trillion property sector and tightened funding access for other developers.

Yango said it is also seeking the support of investors to change the terms of its five other outstanding dollar bonds.

It said the offer was part of “overall efforts to improve our liquidity, preserve options to stabilize our operations as a going concern, and avoid imminent payment defaults and potential holistic restructurings of our debts and business operations.”

The announcement follows a report from financial information provider Redd on Friday that Yango had asked holders of its asset-backed securities (ABS) to refrain from asking for repayment for a year over concerns it would struggle to pay this month.

Yango’s shares in Shenzhen plunged 7.5% on Monday and are down by nearly a quarter over the past week. The CSI300 real-estate sub-index slipped 1.6% on Monday against a 0.4% drop in the blue-chip index.

In the onshore bond market, the Shenzhen Stock Exchange halted trading of Yango’s April and August 2024 yuan bonds after they fell more than 30% on the day.

“The ABS are maturing on Nov. 8, so it’s a bit dangerous. The onshore market is anxious,” said a Beijing-based portfolio manager who asked not to be named, as he was not authorised to speak with media.

In international debt markets, Yango’s 7.5% February 2025 dollar bond fell more than 20% to a discount of about 85% of its face value, according to Duration Finance. Other Chinese developers’ bonds also slumped, weighing on an Asian high-yield bond ETF, which fell more than 1%.

Yango has eight outstanding U.S. dollar bonds worth a total $2.24 billion and 14 outstanding yuan-denominated bonds worth 13.1 billion yuan, according to Refinitiv data. Holders of the February 2023 notes, worth a total of $247 million, have the option to demand early repayment on Nov. 12.

Evergrande narrowly avoided a catastrophic default for the second time in a week on Friday, making a last-minute payment on an overdue dollar bond coupon just before its grace period expired.

Its woes have brought collateral damage, with some other Chinese developers forced into formal default on their dollar bonds last month.

But one developer, Xinyuan Real Estate Co, avoided a default on a maturing dollar bond in October by reaching an agreement with bondholders to exchange maturing notes for new bonds and cash.