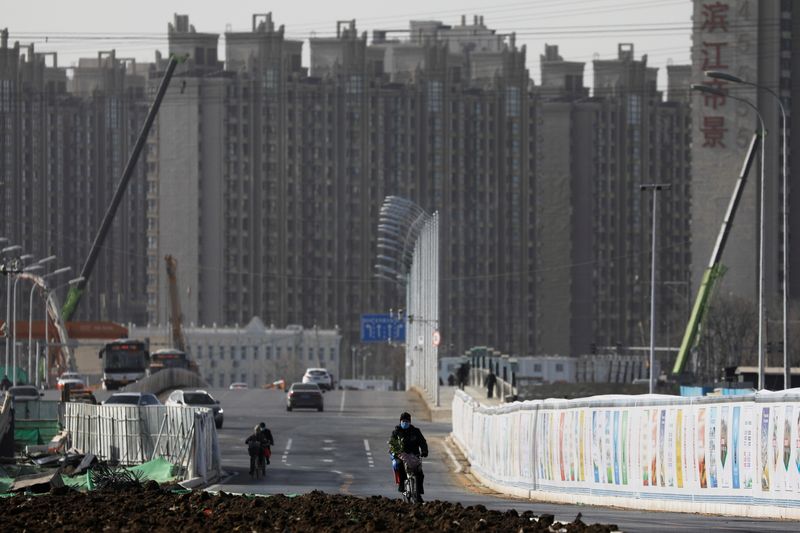 
By Andrew Galbraith and Xiao Han

SHANGHAI/BEIJING (Reuters) -Chinese developers’ shares and bonds stumbled on Tuesday on worries over spreading financial contagion, as sources said one of the country’s top 20 homebuilders is seeking a new extension for its onshore debts.

Fujian province-based Yango Group Co. Ltd. has been in talks with investors to discuss the extension of payments on yuan-denominated asset-backed securities that holders can redeem this month, three sources familiar with the matter told Reuters.

The company plans to repay interest in full, with unpaid principal rolled over for a year, they said. Reuters was unable to confirm whether the company would make principal payments on the securities this month.

Yango Group did not immediately respond to Reuters’ requests for comment.

On Monday, Yango offered to exchange some U.S. dollar bonds for new notes personally guaranteed by its chairman to avoid defaulting on upcoming debt payments.

“Yango may not be able to mobilise all of its cash holdings to repay its maturing debts, given that most of it resides in its project companies. In addition, Yango’s exposure to its joint ventures is significant, which could limit its ability to control its cash flow,” Moody’s said in a statement.

China Chengxin International, a domestic agency, said it had placed the company on a watchlist for possible downgrades, while Dagong Global Credit Rating Co on Monday cut its outlook on Yango to negative due to uncertainty over funds for debt repayments.

The downgrades and warnings weighed on market sentiment on Tuesday, pushing Hong Kong’s mainland properties sub-index down more than 4% at one point, taking its losses since an Oct. 22 peak – when China Evergrande Group narrowly avoided a $19 billion default – to nearly 17%.

Yango Group’s bonds fell sharply for a second day, with Duration Finance quoting its 12% March 2024 bond down almost 58% on the day to less than 13 cents, yielding nearly 160%. Its Shenzhen-traded April 2024 bond fell more than 20%, triggering a trading halt.

November 2022 and 2023 bonds issued by Evergrande unit Scenery Journey fell more than 12% to about 20% of their face value ahead of coupon payments totalling $82.5 million this weekend.

“Quality BB and split names … suffer the most these two days,” said Tam.

Evergrande narrowly avoided a catastrophic default for the second time in a week on Friday, making a last-minute payment on an overdue dollar bond coupon. On Tuesday its shares gave up early gains to fall 2.5%.

Evergrande’s woes have brought collateral damage to China’s property sector, with some Chinese developers forced into formal default on their dollar bonds last month and others proposing extended payment schedules.