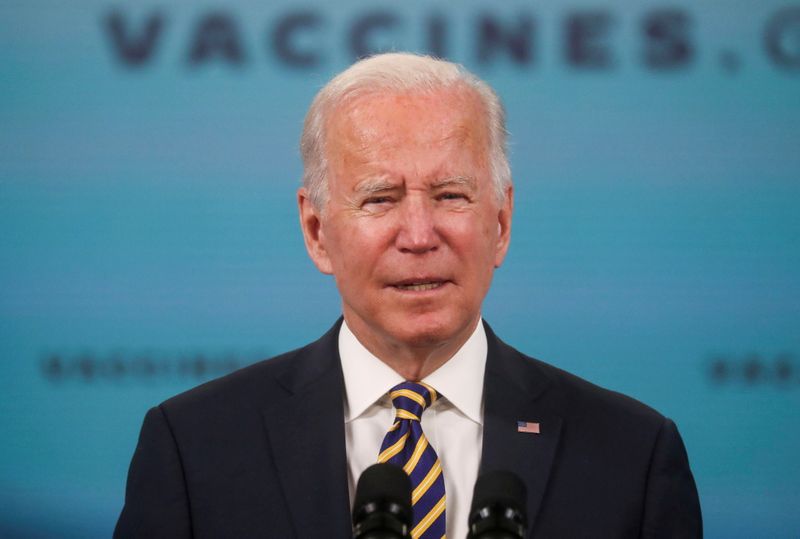 (Reuters) – In an indication of the opposition to the Biden administration’s sweeping COVID-19 vaccine mandate, ordinary Americans are using a little-known procedure to get meetings with government officials to try to undermine the required shots for workplaces.

U.S. President Joe Biden announced in September a nationwide vaccine or testing mandate for every business with at least 100 employees, which will be implemented as a rule from the Occupational Safety and Health Administration (OSHA).

As the Biden administration is finalizing the rule, critics are using an obscure Washington lobbying process to meet with senior policy analysts to vent frustrations, query decisions and present what they say is evidence about the dangers of the COVID-19 vaccines.

The meetings are normally used by well-connected groups trying to win an advantage for companies or unions. But few things are normal about the vaccine mandate, which could be published as soon as next week.

Thirty-six of 129 half-hour teleconference meetings on the vaccine rule were scheduled with individuals, according to the Office of Information and Regulatory Affairs, or OIRA, which schedules the meetings.

The others were with businesses such as United Parcel Service Inc (NYSE:) and Walt Disney (NYSE:) Co or with trade groups, which have urged delaying the rule or want employees pay for testing, according to information on the OIRA site.

By comparison, only three of 56 OIRA meetings about a similar COVID-19 rule in June were with individuals and all of 26 meetings in 2016 about regulation of silica were attended by interest groups.

The vaccine mandate is highly unlikely to be derailed or substantially changed by individuals, even though some of them are openly trying to bog down the process.

The mandate has been criticized by Republican governors such as Ron DeSantis of Florida. Leaders of unions representing firefighters and police officers in New York City say more than a third of their members could be sent home on unpaid leave when enforcement of a similar COVID-19 vaccine mandate takes effect there on Monday.

Stuart Shapiro, a professor at Rutgers University, said meeting requests by individuals during the rule-making process are unusual.

One person who met with Biden officials was Clifford Knopik, a data analyst from Washington state who learned about the process on social media.

“I didn’t actually think they would give me a slot,” said Knopik, who said he discussed what he described as unreliable COVID-19 health data from Washington.

Trade group representatives said the influx of meetings with individuals caught them by surprise.

“I’ve never seen anything like it,” said Eric Conn, who met with Biden officials on behalf the Employers COVID-19 Prevention Coalition.

He said he thought the meetings with individuals might be reducing the amount of time senior policy analysts were spending with industry and advocacy groups. “It appears to have impacted the quality of the opportunity for stakeholder feedback,” he said.