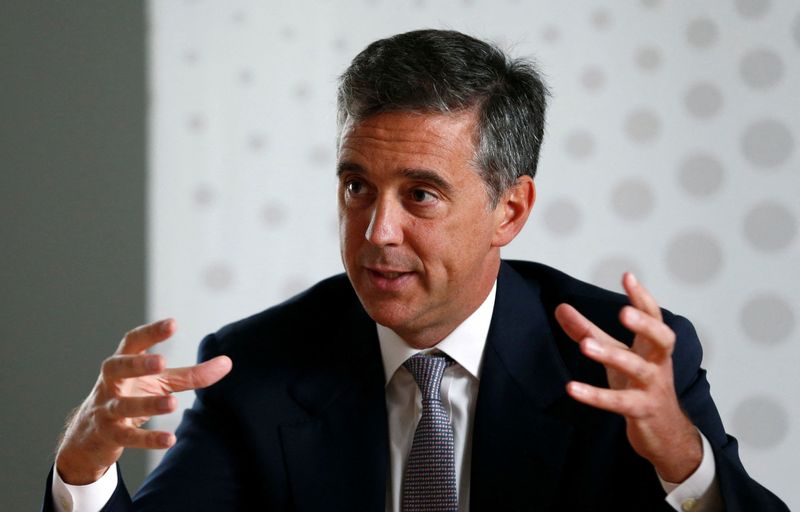 By Pamela Barbaglia and Jonathan Saul

LONDON (Reuters) – Former VTB banker Riccardo Orcel has taken a new role as chairman of London-based agricultural trader Quanton Commodities as he seeks to revamp his career after more than a decade at Russia’s second-largest lender.

It is the second chairmanship in less than three months for the 56-year old Italian who fled Moscow to relocate to Milan in the aftermath of Russia’s invasion of Ukraine and was appointed chairman of London-listed gold producer Polymetal International in March.

Orcel, whose older brother Andrea runs Italian bank UniCredit, was one of the most established Western bankers in Russia and spent 11 years at VTB Capital, the investment banking arm of VTB, where he was non-executive vice chairman until March when Western sanctions prompted his resignation.

“Riccardo is a high-profile personality in the banking world and will help us manage our financials and support our growth,” Quanton’s founder and chief executive Valerio Antonini told Reuters.

Orcel, who declined to comment, will now help Quanton widen its banking relationships and scale up its business which was established in 2020 and is a challenger to the top tier agri trading houses such as Glencore (OTC:GLNCY), Cargill, Bunge (NYSE:BG), Archer Daniels Midland (NYSE:ADM) and Louis Dreyfus.

Orcel’s appointment comes as Russia’s invasion of Ukraine has disrupted grains supplies from one of the world’s top exporting regions, with Russia and Ukraine responsible for more than a quarter of global wheat exports.

Traders specialising in the agri sector have reaped big profits from the crisis as consumers’ food demand remains strong despite soaring prices.

Antonini, a former friend and business partner of late soccer star Diego Maradona who helped forge ties with Cuban and Venezuelan leaders, has sought to build his company’s trading activities amid grain turmoil triggered by the Ukraine war.

“We have gone long in our purchases well before the crisis started and have since hedged our positions in the market,” he said.

Antonini said Orcel’s appointment was not linked to any business initiative in Russia as Quanton was unable to trade Russian wheat at present, partly due to the challenges of finding ships.

The firm, which has Benjamin Mancroft – a member of Britain’s upper house of parliament with the ruling Conservative party – on its board, had turnover of nearly 70 million pounds ($84 million) in 2021, according to regulatory filings, rising to $405 million in the first half of 2022, with a year-end target of $600 million, Antonini said.

Orcel will work closely with Antonini on his plans to raise growth capital ahead of a possible listing of Quanton down the line, the CEO added.

Quanton is one of a few UK-based commodities companies trading in frontier markets such as Iran.

While food purchases by Iran are not banned, banking restrictions using U.S. dollars make such trades complex due to sanctions imposed by Washington on Tehran.

Earlier this month, Quanton sold 60,000 tonnes of German wheat to Iran’s state-run buyer GTC – its second trade with an Iranian government buyer in a year, he said.

He added the firm was also looking to boost sales to other countries impacted by sanctions, such as Cuba.

In Africa, a big buyer of Ukrainian grains, Quanton is seeking to build a multi-million grain storage facility in Uganda, which will serve as a distribution hub for neighbouring countries.

“If the war (in Ukraine) won’t finish in the next five months, the grain shortage will start causing serious problems,” Antonini predicted.