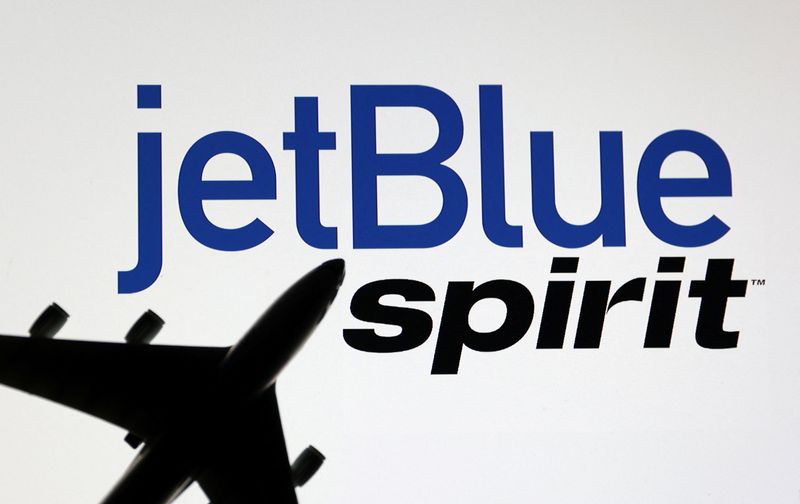 CHICAGO (Reuters) – JetBlue Airways (NASDAQ:JBLU) Corp on Monday ratcheted up its bidding war with Frontier Group Holdings for Spirit Airlines (NYSE:SAVE) Inc as the race for the ultra-low-cost carrier enters the final stretch.

Both bidders see Spirit as an opportunity to expand their domestic footprints at a time when the U.S. airline industry is dogged by labor and aircraft shortages. Either of the deals would create the fifth-largest U.S. airline.

Under the new offer, JetBlue offered a “ticking fee,” which would give Spirit shareholders a monthly prepayment of 10 cents per share between January 2023 and the closing of the deal, raising the overall value of the deal to $34.15 per share.

The New York-based carrier also increased the breakup fee to Spirit by $50 million for a total of $400 million if the deal fails to get regulatory approval. It will also prepay $2.50 per share as a cash dividend to Spirit stockholders following approval of the transaction.

The latest offer came after Frontier last Friday raised its bid for Spirit.

Spirit shareholders are due to vote on the merger deal with Frontier on June 30.

Frontier Chief Executive Barry Biffle told Reuters on Monday the company’s revised offer for Spirit will be enough to secure a merger deal with the ultra-low-cost carrier.

“We’re really excited about it and getting good feedback,” Biffle said.

JetBlue, however, is not ready to give up. On Monday, it again urged Spirit shareholders to vote against the Frontier deal, saying its proposal offers them “more value and certainty.”