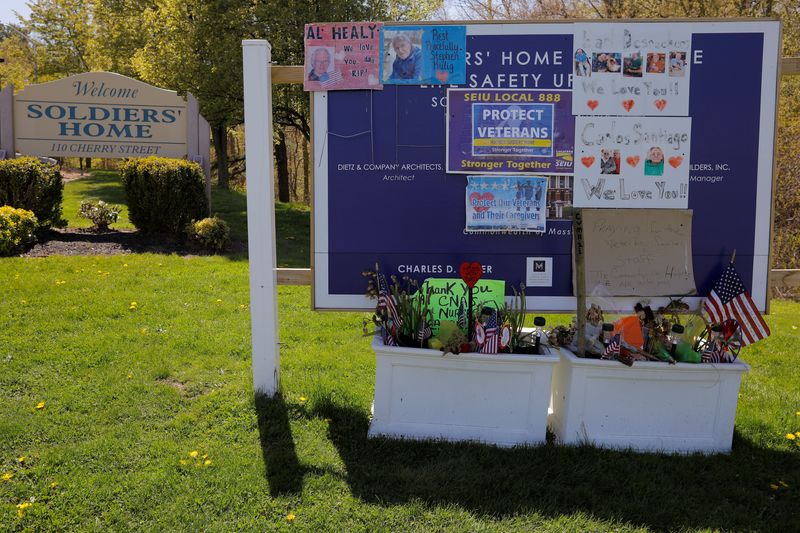 © Reuters. FILE PHOTO: Signs of support and remembrance are seen outside the Soldiers Home, where 88 veteran residents have died during the coronavirus disease (COVID-19) outbreak in Holyoke, Massachusetts, U.S., May 13, 2020. REUTERS/Brian Snyder

BOSTON (Reuters) – The state of Massachusetts on Thursday agreed to pay $56 million to resolve a lawsuit by families of veterans who contracted COVID-19 during an outbreak at a veterans’ care center that killed 84 people early in the pandemic.

The proposed settlement would resolve a pending federal class action lawsuit by families of veterans who died as a result of the 2020 outbreak at Holyoke Soldiers’ Home, one of the deadliest to have occurred at a U.S. nursing facility.

Massachusetts Governor Charlie Baker’s administration said that under the settlement, families of deceased veterans would receive a minimum of $400,000, while veterans who contracted COVID-19 but survived would receive at least $10,000.

“While we know nothing can bring back those who were lost, we hope that this settlement brings a sense of closure to the loved ones of the veterans,” Baker said in a statement.

The settlement requires court approval and covers more than 160 veterans who became ill or died from March 1 to June 23, 2020.

Baker, a Republican, has faced criticism over his handling of the outbreak at Holyoke Soldiers’ Home, a 247-bed, state-run facility in Holyoke that provides healthcare, nursing and other services to veterans.

The deadly outbreak resulted in the removal of Bennett Walsh, the former superintendent of the facility, and prompted a series of investigations into leadership failures and other problems at the facility.

Walsh and former Medical Director David Clinton were charged with criminal neglect in September 2020 over their handling of the outbreak, but a judge in November 2021 dismissed the charges against them. The state’s attorney general is appealing.

The settlement is comparable in size to a similar one in New Jersey, which in December agreed to pay $53 million to resolve claims by families of over 100 veterans who died from COVID-19 while at state-run facilities.

Crocs Gains After Being Added to Baird Fresh Pick List